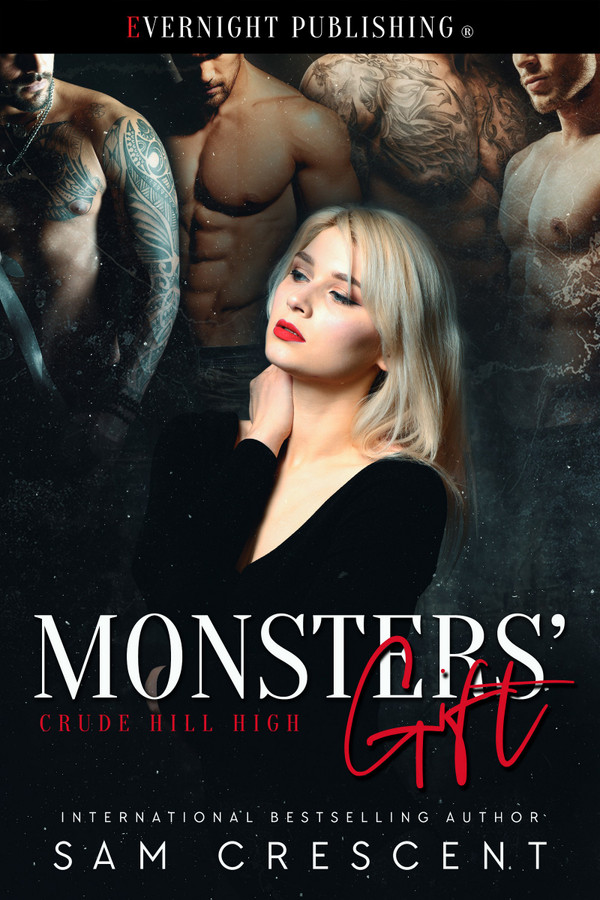 If one goes down, we all go down. Instead of being killed, though, I’m sent to England with my best friend. Gael, Vadik, River, and Caleb have made a deal I can’t change. They awakened me and now I’m nothing.

One moment, I’m in England, the next, I’m back at Crude Hill, in my Monsters’ house, at their mercy. They’ve traded my friend for me, but they’ve trusted the wrong people. My men aren’t boys anymore, but Monsters who know how to torture. The threat to my life should’ve been over, but their own mistakes are about to surface.

I’m their only weakness and it’s a race against time to find their enemies first. There are four of them and one of me. It should be easy. But it’s been a long time since I’ve fought for my life. Only now, I’ve got to fight for a future I once thought was dead.

This is the concluding part of Emily, Gael, Vadik, River, and Caleb’s duet. Crude Hill High will continue in other books.

“My mom may have been a cheater. I’m not one of them.” Ashley sat back, her face pale.

“It’s not. This is all my fault.” I felt bad now. I tried to never bring her mother up as it was full of bad memories. Her mother was a cheater, not that my father was any better. I reached across the table, taking her hands in mine. “I’m really sorry.”

Ashley pulled away. “I need to get to work.” She stood up and I watched her gather her bag.

“I’m fine. I can forget for the most part, you know. She uprooted us, and I was more than happy to go along. I knew her man was married, and if it hadn’t been for that, I wouldn’t have met you.”

“Doesn’t change the fact she’s dead. That they killed her.” Her eyes glistened with tears. “I’ll see you tomorrow.”

I didn’t get a chance to stop her. She moved too fast, but I also knew she wanted to be alone, and I couldn’t change that, nor could I blame her. Her only crime was having a mother who fell in love with my dad, who was a greedy bastard. The only saving grace we had was the fact he was dead as well. It didn’t stop her from missing her mom. I hated this. There was absolutely nothing I could do. No way to console her.

Running my fingers through my hair, I got to my feet and paid for our coffees. There was no point in sticking around.

As I left the café, I glanced back, sure I’d seen someone I recognized. When I glanced over the tables, no one I knew was there. None of it made any sense to me. The feeling of being watched was still strong.

Rather than linger, I left, but I didn’t go to work. I called the supermarket, claiming to be sick. Lying was second nature to me. With the unsettled feeling that rushed over me, I headed straight to my and Ashley’s apartment. No one stopped me on my way, but I found myself stopping to look for anyone who could possibly be following me. It made no sense. Why would anyone wish to follow me? I was no one now, as Amelia.

I thought about Earl Valentine. I hadn’t felt this way in a long time. My heart raced and I wished I had my knife with me. It had been a long time since I thought about having my knife. I thought back to the one River had taken. He’d never given it back to me after I killed that MC guy, stabbing him right through the neck. It felt like that had happened to someone else, not to me.

The way I felt was Earl’s fault. If he hadn’t turned up, I wouldn’t be nervous or panicking. I’d be in control of all of my emotions, instead of being pissed off. While I rushed toward my apartment building, I stopped for the hundredth time and glanced out across the street. People were going about their business, completely oblivious to my craziness. Why would they even have to think about my life, or what I was going through? They had their own lives.

There was no one there. No one who stood out. I hated this feeling so fucking much.

Finally, I headed into my building, but I didn’t take the elevator. I went for the stairs, running up them.

No one intercepted me.

As I grabbed my keys and went for my door, my hand shook. I didn’t like how afraid I was. Gritting my teeth, I let myself inside my apartment, slamming the door closed and resting my palms against the wood.

I knew they were.

My hands were hidden behind my body and I grabbed the keys, sliding one between my knuckles, ready to cause trouble.

I counted to ten inside my head, and then I turned, raising my hand, ready to take out whoever was in my place. They would regret coming here.

My wrist was caught and I cried out at the sudden pain, but I was pressed against the door, my hand lifted up. Then I was staring into a pair of blue eyes. I recognized them instantly. Gael Parson, in the flesh, had me trapped and as I stared at him, I was amazed. He was the same old Gael, and yet, he wasn’t. He was darker, scarier. The part of him that always seemed to be joking, gone. No smile. No nothing.

Neither of us spoke.

I panted and he just stared. I released my keys and it seemed to shake him. In the next second, I threw my arms around him, taking possession of his lips.

Deep down, I knew I should be pissed at him, and I was. But I wasn’t going to waste a moment. One of his hands sank into my hair as the other went to my ass. We both moaned as he pushed me back. This time, we missed the door and went straight for the wall. He broke off the kiss, sliding his lips down my neck to my pulse, and I moaned, wanting more.

Shoving against him, I pulled my bag over my head and let it go. It landed on the floor with a clatter, but I didn’t care.

Next, I was back on him, and he lifted me as I wrapped my legs around his waist.

I wanted him so badly.

Gael and I, we never got to do this. I should be angry at him, telling him to fuck off, but with his hands wrapped around me, all I wanted was to feel him everywhere. We didn’t get this chance before they pushed me away. I needed this.

My body craved his touch more than I wanted to push him away.

It was wrong. I knew that.

Afterward, I’d be pissed. I’d send him back to hell, but for now, I was going to be selfish and have this moment all to myself.

Gripping the edge of his shirt, I tore it open.

Buttons went flying in either direction. I caught sight of all of his ink, the old mixed with the new, but I didn’t care.

We moved to my sofa and he dropped me down.

It was a battle of wills, getting each other naked. I didn’t know exactly who won as we both ended up without our clothes, and that was more than fine with me. Our clothes were on the floor all around us and I stared at him, waiting.

“Fuck, I forgot how beautiful you are.”

I didn’t hide. I held myself still, watching him, waiting. He just kept looking at me and I liked it.

I hadn’t been with anyone else, nor had I dated. I didn’t want anyone else but him, along with his three other friends. I didn’t care if it was conventional. They hadn’t left me alone. They all promised me forever, and instead, I had a mere taste of what it meant to be owned by the Monsters’ Crew before they discarded me.

Her Monster by Sam Crescent

To Awaken a Monster by Sam Crescent