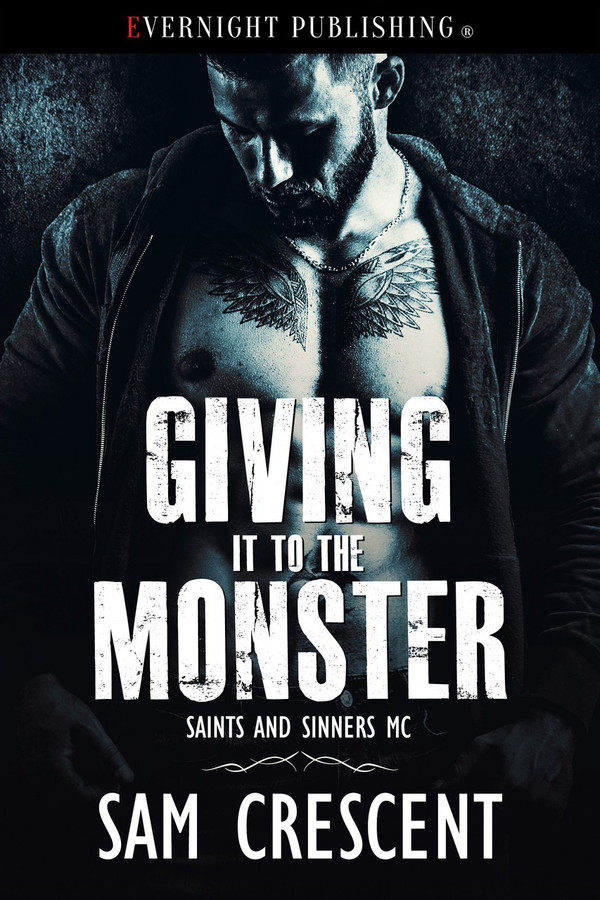 There has only ever been one woman Saint has ever loved, and she left him because he was turning into a monster. To lead the Saint and Sinners MC, he had to follow his dad’s rules. So Saint let Natasha go and embraced the club. At last, with his dad dead and gone, Saint was able to turn the club into something to be proud of, but he had lost the person who meant the most to him.

Then one night, Natasha returns to Sinners’ Corner. She falls into Saint’s arms, broken and bloody, and he has the chance to save her.

Natasha has always loved Saint, and walking away from him was the hardest thing she ever did. Now, though, the only person she can trust is Saint, the man she once ran from. She knows he’ll take care of her and help her keep her abusive husband away. Finally, Natasha sees past the monster Saint portrays to the man he’s become.

Is there a chance for them to have the future she always wanted, a future they both planned? Can two heartbroken souls finally find the happiness they deserve?

After returning home one evening with a text from Saint letting her know he was going to be late, she went into her bedroom, and took the items out of the bag. Staring at them on the bed, she took a deep breath, and removed the outer packaging.

Still, it had been a long time since she’d had sex, and being around Saint was making her hornier than any other time in her life.

Removing her clothing, she lay out on the bed, and calmed herself down. Resting her hands on her stomach, she started to caress up to touch her breasts. Pinching her nipples, she cupped her tits, squeezing them together. Closing her eyes, she imagined it was Saint. It was always Saint, and it had never stopped being him.

She pictured him entering the room, and seeing her. He’d come over to the bed, and she’d see his rock hard cock pressing against the front of his pants. He’d take it out and demand that she suck it. Once she opened her lips, and had him in her mouth, he’d touch her. He would start with his fingers on her nipple, tweaking the hard bud, moving to the next one. Saint would pinch her, creating a little bite of pain, and soothing it out with his hands. Down his fingers would go, and her own hands matched what he was doing.

Sliding her fingers between her thighs, she imagined his hands, two fingers sliding in deep.

She was wet. Getting her fingers slick, she drew them up, teasing her clit.

Finally, we get the book about club Prez Saint. And trust me, it was well worth the wait. Sam&#039;s MC books are great reads, and though I&#039;m a big fan of hers, I&#039;ve just started getting into them.I&#039;m so glad I did. Saint and Natasha grew up together, but Saint&#039;s father doesn&#039;t want Natasha around, so she ends up leaving. But when she comes back, she&#039;s running from an abusive husband. She runs right to the only man she ever really loved. But, can he keep her safe? You&#039;ll want to get this book and find out the answer for yourself. It&#039;s a wonderful love story with suspense and fire you&#039;ll just love! Saint is one hot bad boy!

I love MC romances. I love the brotherhood of the club&#039;s and I love the fierce and protective love they have for their old ladies. Saints and Sinners MC series is all of that and I look forward to reading more of this MC.

I love this series. Glad Saint and Nat found each other again.This book has just the right amount of sex and violence.It keeps the reader interested throughout the book. Cannot wait to see who the next story who will it be.Mimi

I received this book for a honest review. Saint and Nat have known each other since they were kids. Nat leaves Sinners Corner because Saint has changed under his father&#039;s thumb. Nat now needs Saint and they discover their love again. I finished it in just a few hours because I literally couldnt put it down. It kept me interests from cover to cover and had a great storyline and characters..Saint was freaking hawt! and I gotta say Sinclair was my kind of girl

I love MC romances. I love the brotherhood of the club&#039;s and I love the fierce and protective love they have for their old ladies. Saints and Sinners MC series is all of that and I look forward to reading more of this MC.

Great read. Who says young love doesn&#039;t last. It might take a detour but what&#039;s meant to be will be. Another Must read great story!!

It was great. I finally found a great book. I cant wait for more. Im so so excited for more

Love Sam&#039;s work, and this is right up there. Love this series and how it&#039;s evolving, and how you get taste of another couple along the way. Saint is an awesome character, and any girl would love to be his chick.

This is the fourth book in the Saints and Sinners MC series and we find out more about the history of Saint and Natasha. What they shared and how their decisions affected their lives over the years. I enjoyed this series and edition to it but I wish it was a little longer. It was well written with some twists and turns and was great to see the involvement of other members of the club. I cannot wait to see what happens in the next book and the twists and direction it will take. Great job Sam! Happy Reading!

I&#039;ve been waiting for Saint&#039;s book and was not disappointed. He&#039;s loved Natasha since they were kids but things happened in their lives and she left. The club life made him hard and in his words, a monster. When she comes back after her soon to be ex beats her up, things start to heat up again and Saint vows he will NOT let her go again. We also get to view the strange relationship between Pea and Melissa a little more. Hopefully they will have a book coming up before long. As always, Sam writes a book that you just get sucked into. Loved it and can&#039;t wait for the next book.

I ve been waiting for Saint&#039;s book for ages and finally its here. Love that these two lovebirds fell in love when they were 5 yrs old and never realise it until they got older and then circumstances changed all that and they both went their separate ways. Until years later Natasha ends up back in Saint&#039;s life hurt and asking for his help. Happy that Pea and Melissa are going to try and make it work as a real married couple and hope that we will get to see more of them in the next book now that she is pregnant and see how Pea will react.