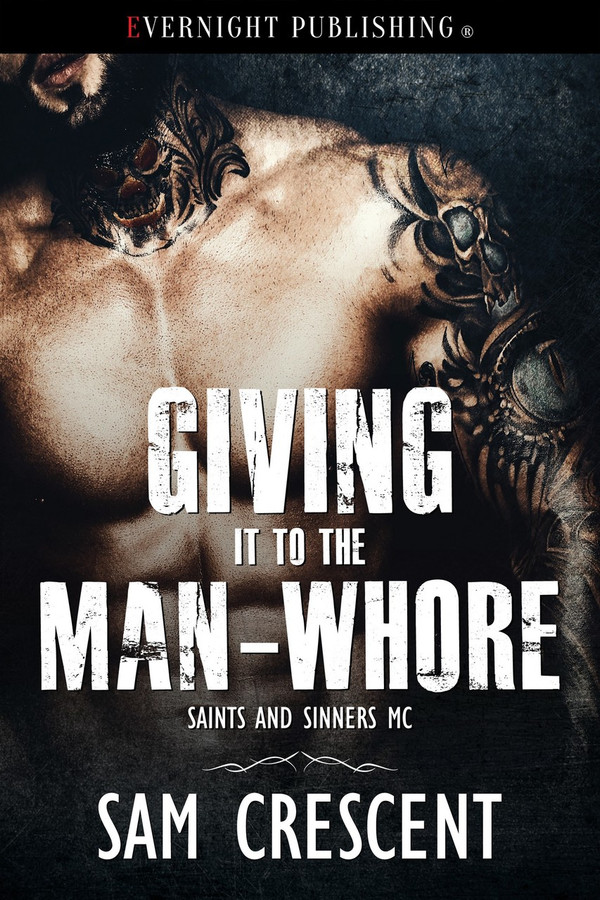 For a long time, Melissa and Pea enjoyed the pleasures of an open relationship. They have found a life that brings them together. They are friends, lovers, along with being husband and wife, and now they’ve agreed to be faithful!

Mel is pregnant. Her relationship with Pea is in new territory, and she’s scared. They’ve promised to be together, but does that involve children?

Pea is completely, totally in love with Mel. He’ll do anything for her. Their marriage has taken them to places he never thought possible. The other women are gone, and he doesn’t miss them. There’s only one woman he wants in his arms, in his bed, and that’s Mel. He knows her, and above everything else, he loves her. He wants a family, a big one, with Mel, and he knows they’re going to make amazing parents.

Everything is working out for them, a healthy pregnancy, their marriage—what could possibly go wrong?

But nothing is ever perfect. There’s danger lurking in Sinners’ Corner, and when Mel is caught in the crossfire, can Pea get to her in time?

His hand moved up, and he began stroking her neck. She closed her eyes, enjoying his touch.

The movie ceased to exist for her. All she wanted was him and his touch. His hand didn’t linger too long on her neck. Down went his hand inside her shirt. She pressed her chest up against him.

In the past few years, she’d put on a little weight. She’d finally become comfortable with herself, and at a size sixteen, she was happier than she had been in a long time.

She chuckled. “You’re so romantic.”

“Do you want me to call them breasts? Melons? Fun bags?”

She giggled as he pushed her back against the sofa. “I don’t care what you call them so long as you know what you’re doing with them.”

He grabbed her shirt and shoved it up over her head so that it rested on the back of her neck. “You have no idea how much I fucking want you.”

His face pressed against her tits, and she gasped as he sucked on the flesh of her cleavage. Wrapping her legs around his waist, she pulled him against her, wishing she wasn’t wearing jeans.

His hands moved up her sides, cupping her breasts and pressing them together. He licked each mound across the lace of her bra. “I love this color on you.”

It was a pale pink, and so comfortable. The lace felt soft against her sensitive nipples. They were the only kind of bras she could wear.

He flicked the catch, releasing her bra, and she moaned as she felt free. Within seconds he had her shirt all the way off her, and her bra, too. She grabbed his shirt, pulling it up over his head, revealing his heavily inked arms and chest.

Running her hands all over him, she saw her name inked over his heart, and she loved that. Mel. Three letters making her name.

That was who she was, his Mel.

His lips wrapped around one nipple, and the pleasure and pain had her yelping.

“Just a little sensitive today.” She tried to recover quite quickly. “Could you do it slowly, and just use your tongue.”

Sam Crescent weaves an unconventional love story with this motorcycle club romance. A curvy gal with a mind of her own Mel isn&#039;t your regular girl next door. Pea is an active member in a MC with a reputation for pleasuring the ladies. Mel and Pea have such an unusual connection and I enjoyed seeing how they were navigating the changes of their relationship. I enjoyed how steadfast they both were in their commitment to one another and how they made no excuses for the fact that their marriage was no one&#039;s business but their own. I truly enjoy witnessing a big bad biker become besotted with a woman and turn into a romantic. Pea might appear to be rough around the edges but Mel brings out a softer side to this tough man. But what I found myself enjoying more is how Pea brings out a softer more romantic side to Mel. This story has a little bit of everything. You get your action, adventure, love and affection. Plus the hot and fiery passion as well as the hope for the future. So if you like your romances a little on the edgier side, this one is a good choice from this talented author. The Story: Mel and Pea have been married for some time but they have behaved as friends and haven&#039;t committed to one another. But the time has come and they have decided to give their marriage a go but can these two truly give up their freedom and stay true to one another?

I would recommend this book. It was more that just two sex craved people coming together. Mel &amp; Pea story showed how a relationship grows over time to commitment and love. The secondary characters completed the story line since they added intrigue and drama.

I am so in love with this story. Pea and Mel have had an open marriage , strange to most, but it worked for them. There is nothing Pea will not do for her. They decide to become exclusive and their love grows stronger. Now they have a baby on the way. I love the characters in this book and the rest of the series as well. No one can do it like Sam.

Five Stars Plus!!! WOW !!! When we have seen Pea in other stories in this epic series he does not strike you as the settling down type neither did his wife Mel. They have a unique connection that not everyone understands but they do and are both happy with their past arrangements of being in an open marriage. But now things have changed they are determined to be faithful to each other and start a new chapter of their life together as a united couple and now family once they learn they are pregnant. Yet again Sam has captured the essence of the MC, the unity of the brotherhood added with the delicious passion these bikers are known for, glimpses of characters we already know and those who will hopefully have their own stories told in the future. This is an all round great read told in the way that only Sam can. My opinion and affection for Pea has totally changed and I am glad that I gave him a chance and you will be too if you read this series and story. You won&#039;t be disappointed I promise. Well done Sam on another fantastic story. Happy Reading!

I like this series a lot. So far my fav is Rage. But Pea &amp; Melissa story was also wonderful. I read them all.

We finally have Mel and Pea&#039;s story and what a story it is. I didn&#039;t really understand their relationship at first as it was an &quot;open marriage&quot; but the more I read, the more I wanted to know why both of them had agreed to this type of marriage. Finally in this book, we find out why and I can say I understand. But how will they feel when they find out they are going to become parents? And of course, we know that nothing is simple in the world of Sam&#039;s MC clubs!! Danger comes and Mel is right smack in the middle of it. Can Pea and the rest of the guys get to her before he loses her and their baby? LOVED the book!!

I loved this book. From the first page to the last page. Pea and Mel are another fantastic couple that Sam has giving us. I loved how in the beginning that they were open to having an open relationship only to find them chosen to become loyal to each other. I recommend this book to everyone who loves a good MC book as well as all of Sam&#039;s books.

I love Sam Crescent!!! The way she brought Pea &amp; Mel from an open marriage to a committed couple, and the drama that ensued (no spoilers here!) was awesome!! It was such a fun ride to go on with them &amp; the club. Little drama, little fun, little humor. I suggest you definitely get this book &amp; read it it, quickly! And if you haven&#039;t read the previous books, get the and read them too - so totally worth it!!!

This was a good one to show the behind the scenes with their marriage. While this was of course a really good book, this isn&#039;t my cup of tea. A lot of people consider the H cheating but honestly i can agree that if they agreed to an open relationship its not cheating. Nut this kind of plot is not for me. On the other hand, there are a lot of explanations and building of love and marriage and of course got some action in there!

I was curious about this couple from the first I meet them. Pea and Melissa... Two strange, and some would say f****d up people. I don&#039;t think a lot saw theirs dynamic changing. Or at least not in that way. Pea was a man-wh•re. Married one at that! Yeah, I can hear whispered &#039;Di•k!&#039; &#039;Bastard!&#039; in my head. Lol. And Melissa... Well, at first you would think &#039;Poor, girl! Married to that cheating bastard!&#039; Then you learn that she&#039;s not only fine about it, but she&#039;s not an angel herself. Honestly, I had no problem about theirs marriage. Not then, not now. They didn&#039;t lie to each other. They gone with open eyes into it. And I guess each their own. But now that Pea and Mel are changing their marriage into something else, it made me to think more about it. Yeah, Pea married Mel to help her and in a way giving her and her sister the club&#039;s protection. But also it was like... Well, both weren&#039;t ready for anything serious when they first meet. But deep down they knew, that they are it for each other. So, not to lose that chance in the future solution was open marriage. And then we are finding out about another part of theirs marriage. Maybe I should have seen that. But then again, no matter how we try not to, we do judge book by its cover. And Peas cover wasn&#039;t impressive, but the inside was another thing. Actually, I was almost blown away what Pea was hiding. It made me thinking... Does any in the club knows the real Pea? Or only what he lets them to see? If you are with no limitation to your books, you should give Pea and Mel a chance. They may surprise you.