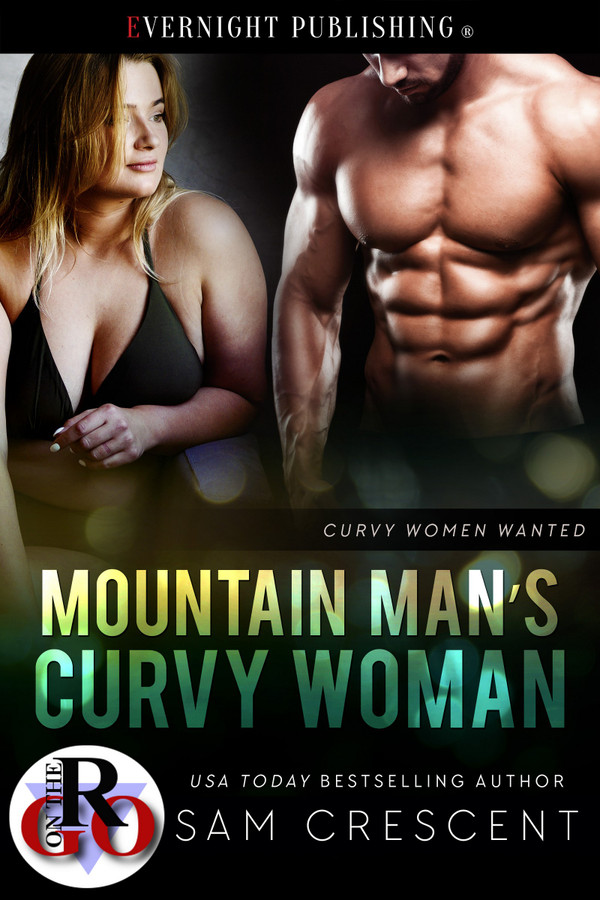 When Meghan Young is sent out to the mountains to improve her health, she never expected to be attracted to Mount, the owner of the house and land where she’s staying. He’s gruff, sharp, hard, sexy, and intense. There’s no way a man like him could ever want her—is there?

Mount left the world behind to start a life for himself away from society. When Meghan enters his home, he can’t help his feelings for the sexy, curvy woman. She’s everything he’s ever wanted, but he can’t have her. She’s only there to break her workaholic tendencies, not to be with him.

One touch is all it takes, and Meghan wants him more than any other man. He’s like a drug. His touch sets her on fire. His voice makes her ache.

What started out as an imposed prison turns into the key to her heart.

Meghan opened her eyes and felt a large hand on her breast. Glancing down, she saw it there, not massaging or coping a feel, but held her firmly against his chest. Mount was behind her, and she froze.

Her tit was in his palm. The puckered nipple was hard, and she wanted to rub against him to create some friction.

He let out a grunt and she became aware of something prodding her ass.

Mount was rock-hard, next to her ass, and did he feel so good. She closed her eyes and tried to control the pulse of need rushing through her body.

His other hand was on her hip. It was too much for her to bear.

Get a grip, Meghan.

He moved and his hand tightened. She couldn’t help the little moan that escaped as he touched her.

“Shit, I’m sorry.” He made no move to let her go and the touch on her hip got harder.

You can either pretend this never happened. Leave the bedroom, and spend the rest of your time wondering why you didn’t explore this. Or, you can do something you would never do and wriggle your ass against his cock and see what he does.

What if he throws me away? What if I’m reading this all wrong?

She wriggled her hips and he held her steady.

“Meghan?” Her name sounded more like a warning as it came from his lips.

She was crazy. Need flooded her body and rather than back down, like she probably should, she didn’t. She ignored his grip, and instead, pushed back, wanting to feel him surround her.

He let out a curse, but she didn’t care. Within seconds, he had her locked against him. “What do you think you’re doing?” he asked, his growl next to her ear.

“If you don’t want me, say so.” He wouldn’t be the first man to tell her she was unwanted.

She cried out as he cupped her between her thighs, stroking her pussy over her pajama bottoms.

“You think I don’t want this?” he asked. “You think I haven’t been watching this ass prance around my home, and not thinking about how good you’d feel on my dick?”

She never expected him to be such a dirty talker, but she wasn’t about to complain. It felt so good to be with him. So fucking good.

He rubbed her harder and she reached behind her, touching his cock, feeling how long, hard, and thick he was. She’d never been with a man his size, and it would hurt. Mount shoved her bottoms down and she helped to kick them off. She cried out as he plunged not one but two fingers inside her pussy.

“Oh, fuck. You’re nice and tight, aren’t you? You’re fucking perfect.” He pumped in and out of her, his thumb stroking over her clit. He let her go, pushing the quilt out of the way. There was a rush of a chill over her body, but she ignored it as the heat building inside her was more than enough to keep her warm.

Who needs fate when you have a friend like William? Somehow, William knew Meghan needed a quite place to write her newest book. He knew exactly where she needed to go. His recluse friend, Mount Row&#039;s mountain home. In true Sam Crescent fashion, the fact that Meghan didn&#039;t fit the stereotypical characteristics of most heroines in that she isn&#039;t the perfect size 2, 4, 6, or 8. As a plus sized or Curvy as Sam puts it, woman, I can picture myself in the story and almost live the story with the characters. I mean, who wouldn&#039;t want a sexy, dominant mountain man like Mount in her bed. I wouldn&#039;t kick him out for sure.

Meghan had been working hard for so long she was beginning to burn out. At the strong urging of her friend and agent, she agrees to have a retreat to a mountain cabin to try and recharge. Mount had opened his home to her and despite herself Meghan was curious. Can they each find what they need? I found this to be an interesting and sexy short story. Mount, in particular, was an enigma who I found myself drawn to almost immediately. I was pleased that Meghan and Mount didn’t just jump immediately into bed and act on their mutual attraction. I loved getting a good sense of what both characters were like and how they fit together. Watching Mount and Meghan share some of their past and experience the peace of the solitude together really helped me see that they had a good and solid foundation together to build their relationship on. The chemistry between them was smoking hot and when they finally both acted on their feelings it felt both right and intense. I felt it took both Mount and Meghan a little too long to come to the realization that they loved each other and were perfectly suited – I adored that William, their mutual friend – had to practically beat them each over the head with the knowledge. When they finally confessed their feelings it was a lovely and deliciously romantic scene and I felt a lot of satisfaction with the happy ending. Romantic, sexy and a total fantasy, I found this to be a brilliant short story and one I will happily reread a number of times in the future. With interesting characters and a wonderfully secluded setting this story is an awesome, quick and hot read.

I&#039;ve been reading Sam Crescents books for a while now and she doesn&#039;t disappoint. Mount and Meghan&#039;s story was great to read. I highly recommend Sam Crescent if you&#039;re not already reading her stories.

I love the Curvy Women Wanted series by Sam Crescent. This is another quick and steamy read. Meghan is sent to the mountains to get away from the pressures of her job. Her &quot;boss&quot; sends her to his friend, Mount, who lives alone on the mountain and agrees to take Meghan on thinking he can just do his own thing. They both are drawn to each other but fight it at first. The emotions are good and the sex is smoking hot! But will they each figure out then need each other?

Meghan is a writer and has been working non-stop for several years. Her editor thinks she needs a break. William, her friend and boss, sends her to the mountains to &quot;relax&quot; at his buddy&#039;s cabin. Mount, the buddy, lives alone in the mountains with no electricity, wi-fi, and other creature comforts that Meghan is used to having available. Well, this short read definitely gets steamy real quick. Mount doesn&#039;t want to admit to needing Meghan at first, but he does. Likewise, Meghan&#039;s life is missing something and that might just be Mount. How does the Mountain Man convince the city girl to stay and live happily ever after? Well, you have to read the book!! Another great story from Sam! Curvy Women Rock!!

I love the Curvy Women Wanted series by Sam Crescent. This is another quick and steamy read. Meghan is sent to the mountains to get away from the pressures of her job. Her &quot;boss&quot; sends her to his friend, Mount, who lives alone on the mountain and agrees to take Meghan on thinking he can just do his own thing. They both are drawn to each other but fight it at first. The emotions are good and the sex is smoking hot! But will they each figure out then need each other?

Their Juicy Woman by Sam Crescent