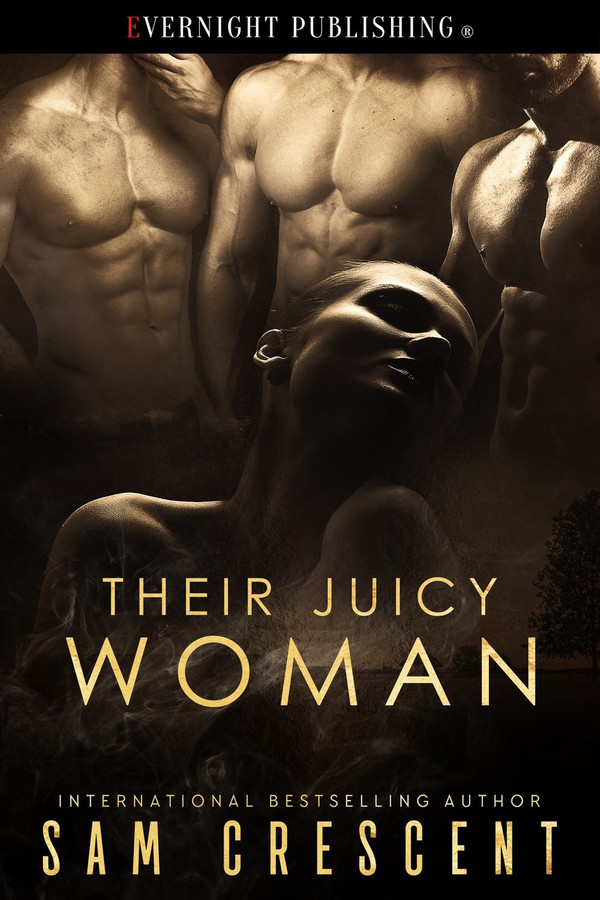 Casey, Parker, and Shawn Smith have grown up in a family with two fathers. They’ve never really fitted in, but they didn’t care to either. Owning a ranch, they don’t have time to mess around, so when they decide on a woman, she is the only one who matters.

When her mother dies after a three-year battle from cancer, Poppy doesn’t know what to do. Her best friend Shawn and his brothers have the perfect answer. She can take the role of their housekeeper, helping to run their ranch.

But the Smith brothers want Poppy as more than just a housekeeper—they want her as their woman. Each brother made a vow to her mother to love her and take care of her. Poppy will belong to them. It’s a seduction of the senses, and the one thing the Smith brothers don’t do, is lose. They’re going to win their juicy woman.

However, someone is killing animals on the ranch. Can the brothers protect Poppy from this unknown threat? And will Poppy choose a life with three men, or walk away with nothing?

All too soon, he stopped. “I’ve been wanting to do that for a long time.”

Before she could say anything else, he was once again leaving her as someone called him for something.

What the hell is happening?

Two men had kissed her, leaving their mark on her lips, and yet none of it made sense to her. Well, it did make sense, but she didn’t want to overthink it.

Was this because she shared their house?

No. She’d never seen any of the Smith brothers randomly kissing women. In fact, she couldn’t recall a moment she’d ever seen them kiss a woman, not even Shawn. He’d never told her about kissing anyone, not that she’d ever asked.

When Parker didn’t come back, she continued to pick up trash, and when her job was done, she made her way toward Casey’s truck. He was waiting for her with his arms folded.

“Have I done something wrong?” she asked.

“Nope.” He crooked his finger at her, beckoning her to come closer.

She rolled her eyes, but moved toward him, smiling as she did. “What’s up?”

“My brothers have both kissed you.”

Casey silenced her with his lips, and all protest left her as he held her tightly. His kiss was gentle and yet firm. His hold tight as he turned her so that her back was against the truck. He moved so that her leg was over his hip, bringing his cock close to her pussy.

She was on fire, needing his dick so hard it was shocking her with just how dirty she needed it.

His lips trailed down to her neck, and he sucked on the pulse right there.

“You have no idea how badly I want to be inside you right now.”

She licked her swollen lips, getting a sense of exactly what he wanted.

She wanted it, too.

What was wrong with her?

It was one thing to fantasize about it. Quite another to actually be doing it.

“You smell so good.”

No much suspense or mystery here, just a nice, sweet romance with a lovely heroine and the brothers who love and take care of her. Lots of emotion. The brothers are wonderful and caring to the heroine.

Sam Crescent takes the reverse harem theme and makes it all her own with this loving and lusty story. Casey, Parker and Shawn may be brothers but their differences are what make each of them so irresistible. Casey as the oldest brother is steadfast and solid. He is used to taking responsibility for those he loves and seeing how his feelings for Poppy have developed made it all the more enjoyable for me to witness his intensity. Parker has always been Poppy&#039;s protector, starting in childhood and continuing on into the adulthood. Parker is great with animals which is always a revealing characteristic. He works hard at the family ranch but he also knows how to play hard and watching him with her and his brothers just shows what a positive and caring man he is. Shawn is the youngest brother and has been Poppy&#039;s best friend for as long as they both can remember but as he&#039;s grown his love for Poppy has grown from childhood platonic to permanent. Poppy has had a rough time of life so far but she doesn&#039;t feel sorry for herself or expect pity and watching her come to terms with the feelings the Smith brothers have for her and their wishes for the future was both entertaining and heartwarming. Above all I found this story to be a beautiful love story. Don&#039;t get me wrong, it might not be what many consider conventional and it is on the spicy side but at the heart it is a love story. If you like when your curvy heroines have a happily ever after this is a great choice. The Story: Poppy is no stranger to multiple partner marriages. After all her best friend has two fathers and a mother but she never dreamed she would have all three Smith brothers want her especially for marriage, forever. Casey, Parker and Shawn know that Poppy is meant for them and now is the time to convince her

Three men in love with one woman in love with the three men . Holy smokes !! This steamy romance was a joy to read !! I recommend it to anyone who loves,a good romance with a triple hea !! Lol !! Just when you think you know Sam , she&#039;ll have you in awe all over again !! Proving why she is tops in our hearts !!

I love any and all of Sam&#039;s books she not only is amazing but some of her books are very heart warming and damn I can&#039;t say enough about her she the best

Loved it from start to finish. Casey, Parker and Shawn were so attentive and lovable to Poppy especially after losing her Mum. There is a someone who is not happy about the Smith brothers loving their woman. A beautiful menage story.

OMG Sam Crescent, you have out done yourself on this book. I love your writing, but this book is one of your best so far. The way you start from the beginning of the friendship and give snapshots of the building relationship is spellbinding. This book has everything. Love, sex, strong men and an equally strong woman. There is equal bitchiness from people and even a killer in disguise. It&#039;s a really good book.

There is something about three men loving one woman like crazy. I loved Casey, Parker and Shawn. They were each girls dream man. And Poppy was one lucky girl, to have all three of them devoted just to her. I may have been a bit green while reading this book. Lol