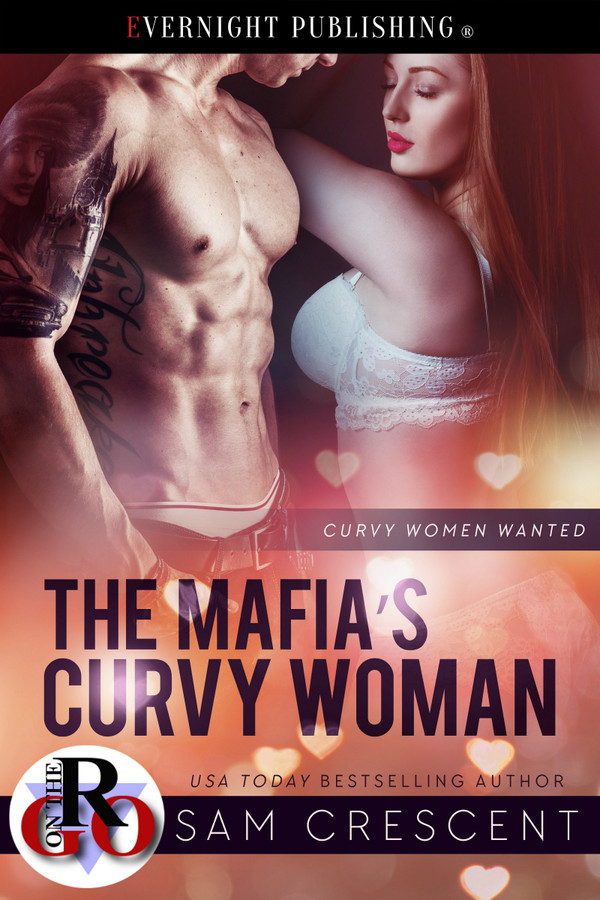 Marco Guidi has his sights set on curvy Petal Marshall. He’s wanted her for a long time, and now he is going to have her, as a “gift” from her family.

Petal knows exactly who Marco is and what he does for a living. He’s dangerous, but that doesn’t stop her wanting him. Her attraction to him scares her, but the moment Marco touches her, she can’t bring herself to deny him. She craves his touch and any dirty thing he can do to her.

For Marco, he’s not used to having a weakness. Wanting Petal comes with risks. She’s not safe in his world, but he will do everything to protect her.

Being with Marco comes with a price. Petal doesn’t know how long he’ll want her. Is she just for his amusement and will he move onto the next woman, or does he want her forever?

Marco’s happiness is in her hands. Will she give him what he wants, or leave him wanting more?

No other woman would do. The only pussy he wanted was hers.

“You know you’re all mine. You can’t look at another man or have another man.”

She smiled. “We’ve already been over this.”

“Good.” He grabbed the sponge and soap. “Clean me.”

She took the items from him, and he watched as she lathered up the sponge before putting it on his skin. She worked the lather into his flesh, and the water ran it right off.

He couldn’t look away, mesmerized by her.

From the moment he noticed her, he’d been addicted. She kept on working the lather into the sponge before washing him.

She had avoided his dick.

“Clean me.” He took her hand and wrapped it around his length so she had no doubt as to what he meant. “Use your hand, not that thing.”

She nodded but didn’t say a word.

For all of her bravado, Petal was a little embarrassed. He saw the heat in her cheeks and couldn’t help but smile.

“You know I haven’t. It’s what being a virgin is all about.”

“A hymen can stay intact, Pet, even when you do other things.”

“These hands haven’t touched anyone else, and this body hasn’t been touched by anyone. I’m a virgin in all things.”

“Do you want to remain a virgin?” he asked, cupping her ass. He gave the rounded globe a squeeze, and she whimpered but didn’t pull away.

He watched as she licked her lips and shook her head.

“You want to know what it’s like to ride a cock, to be fucked, to be sated?”

“Yes.” The single word was so faint, but he heard it. There was no doubt where it had come from.

She didn’t avert her gaze, and he liked that she was willing to take what she wanted without backing down.

Letting go of her ass, he took the soap and sponge from her. He moved her into position so he could lather her body. She stayed perfectly still, but he saw her nipples and the flush to her body.

The loofah got in the way, and he soaped up his hand, touching her, washing her, getting her ready for him and him alone. He turned her so her back was then to him.

Marco took extra time with her ass. He loved touching her, and he couldn’t get enough of this ass.

Petal has spent her whole life knowing the truth; her dad Is not a good man but he is her father and she loves him. She has remained innocent all 21 years of her life but now she is being sold to Marco, a capo for the mafia, and she could not be happier. Marco is a killer and the one thing he wants is the curvy goddess, Petal. When he sees his opportunity he takes it and now Petal is his. What do you do when your whole world is wrapped in one woman well you protect her and show her who she belongs to. Petal is unsure if this is a momentary affection or if Marco wants her for more than her virginity. Marco has never trusted or let anyone into his life until Petal. What else can the capo and the virgin do but find a love like not other but will his world allow him to keep an innocent? Sam Crescent is an outstanding writer no matter the subject she tackles. I love the Curvy Women Wanted series as they are a reprieve from life even for those with an alpha in their life. I fall into each one of her stories and always come out satisfied. Marco is a different kind of capo since he has a heart and Petal is a strong woman because she knows who her man is and accepts him flaws and all. I like a character who knows what she wants and makes her man believe it was all his idea. I highly recommend the writing of Sam Crescent and her Curvy Women Wanted series because every character is unique, and every romance finds its own way to forever. Give The Mafia’s Curvy Woman with Marco and Petal a try because these two find a forever no one expects.

Marco’s eye had been on Petal since she turned eighteen. Curvy in all the right places, she called to him more than anyone ever had. Now twenty one, Marco is tired of waiting and takes her as payment. Petal was nowhere near as stupid as her parents thought. Although she wanted to hate them for selling her, Marco’s secrets and his dark, dangerous looks appealed to her. Will they each find what they’re looking for? Grab a nice, cold drink, sit back for a few hours and turn off your brain. This is a great, naughty short story for readers who are looking for a dirty bit of virgin-and-the-mafia’s-man shenanigans. I don’t feel this is a good story for the faint of heart – neither Marco nor Petal have any illusions about who they are to each other – or what Petal’s purpose is in being Marco’s kept woman. There’s not a lot of romance or foreplay or gentleness in this quick story. A few times I really struggled to find Petal’s actions believable (like the first time Marco came home after a job – surely the smell and mess would have curbed her desire?) but each time reality tried to intrude I simply let it go, reminded myself this was a sexy story and not reality and dove back in. Readers looking for an intense, dark and explicit story should find this extremely appealing. I feel the author did a great job getting the blend of darkness, death and “living in the now” sort of feel of the mafia lifestyle just right. Even though I had some doubts and qualms, the excellent writing and intriguing characters kept pulling me back to the story and interested in finding out what happened next. While I don’t feel this story will appeal to all readers, I have to admit I found it darkly sensual. An acquired taste for sure – but readers who like darker romances, assassin, or other mafia stories should definitely feel this checks a similar sort of box.

This is a wonderful read from the very beginning. I was captivated by this book and continuously found myself drawn to the characters. Nice plots and easy to follow. The characters had such chemistry that you could feel the sparks. In true Sam Crescent form the characters and their personalities are unique with qualities and traits that balance out perfectly. The chemistry between the main characters is sizzling. I loved they way they came together so smoothly. The scenes are so graphic and vivid it&#039;s easy to picture each scenario as it plays off one another beautifully. Sam Crescent did an excellent job bringing these stories to life flawlessly. I voluntarily submitted an ARC review for this book.

Another perfect curvy women book! Sam hit it out of the park with this one. Marco and Petal were so great together, sweet and steamy with a great HEA!

Marco and Petal hmmm I really really liked it!! Petal was sheltered most of her life. Then there&#039;s Marco who&#039;s wanted Petal for a while. So Marco does what Marco does takes what he wants. If you like a lot of spice with your story then this is what. The story is really really good , Marco is you sexy alpha male and Petal might seem like a pushover but the girls got a firey temper. Their a match made in heaven

Another amazing book from Ms. Crescent. Love her CURVY series. I cannot wait for her next book. Live the characters and they amazing chemistry.

It was pretty good quick read. Though, the books name has mafia in it, it doesn&#039;t focus on it and more on Marco and Petal relationship. So, it was a relaxing read with no dramas.

This was a short and hot read from Sam Crescent. I loved the relationship between Marco and Petal. It was more about their relationship instead of being mafia related but you still knew what he was and what he did. Not a lot of drama which was nice. I need that break from drama every now and then. All in all, this was a great little story.

Their Juicy Woman by Sam Crescent