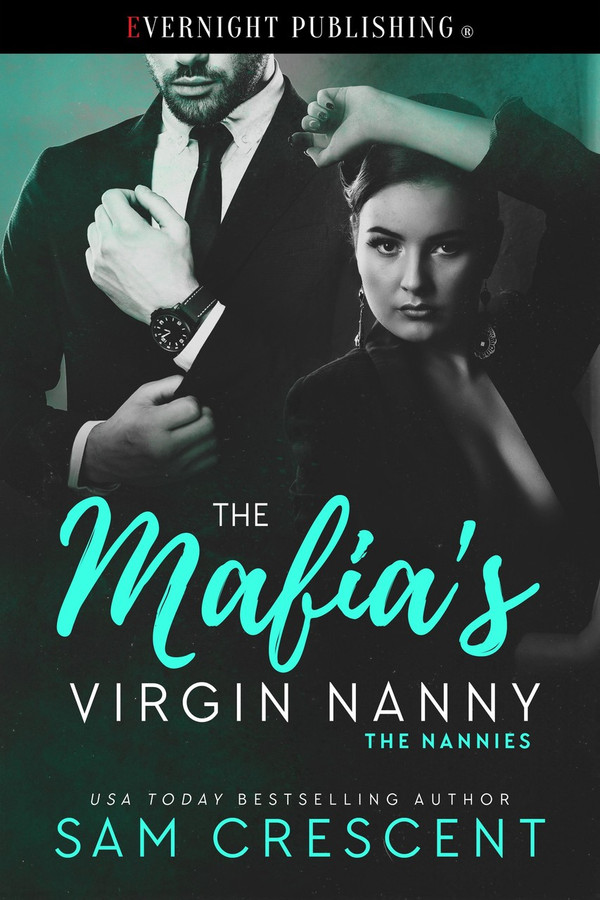 Alonzo Zanetti has wanted Tessa for a long time. Ever since he took her in after her parents were killed, he’s been taking care of her, protecting her. When his sister gives birth, he sees his chance. She will become his sister’s kid’s nanny. This gives him the perfect opportunity to get close to her … to make her fall for him.

Tessa is used to being overlooked. She knows what pain feels like, and even though she’s never been exposed to the underworld her father was part of, she’s not immune to it either. When Alonzo demands she spends more time with him, it terrifies her. He’s her boss, the head of the Zanetti family, and one of the most feared men in her world—and he always makes her pussy ache and her pulse race.

When Tessa makes a huge mistake, it’s up to Alonzo to protect her, to keep her safe. Will he be able to keep her from the wrath and death of his world, or will she run when she gets the chance?

“Tessa, open the damn door,” he said, slamming his fist against it. He wasn’t above kicking her door open.

There were plenty of rooms in the house for her to stay in.

Running a hand down his face, he was pissed off.

The new leader of the cartels wanted to give him the runaround, and he wasn’t interested in price bidding for land. Not to mention Benedict had arranged a meeting with a fucking trafficker, which pissed him off.

“What do you want?” Tessa asked, opening the bedroom door before he could slam his fist against it again.

“Why are you not at the library?”

She wore a pair of pajamas, and damn it, she looked sexy as fuck. His cock stirred at the sight of her.

“Why should I be at the library? You think you can talk to someone like that and then for everything to be okay?”

He wouldn’t talk to her with the door separating them. Pushing it open, he stepped inside and glared at her.

“What are you doing?” she asked, stepping back.

“I was talking to a guy today that would tear your fucking flesh from your bones. I don’t want him to know about you or to get close to you. You’re not my boss, Tessa. I gave you an instruction.”

“My job description is nanny. Not even for your kids. You don’t get to boss me around.”

He reached out, grabbing her, slamming her against the door. He took hold of her hands, pressing them above her head. “Oh, yeah, and who is going to stop me, Tessa? I can do what I like, when I like. I wasn’t going to put you in danger. Not after I’ve done everything I can to keep you out of it.”

He stared down at her. Her chest heaved with each indrawn breath, the hard buds of her nipples pressing against the front of her shirt.

She was so close that all it would take was for him to cup her tit to feel her. He wondered if she wore any panties beneath her pajama shorts.

“You shouldn’t be here,” she said.

She wasn’t fighting him to get out. Her gaze was on him, on his lips. He saw the need in her eyes even as she tried to fight it. There was nothing to fight, nothing.

He leaned in close.

He didn’t tell her.

Taking her lips beneath his, he kissed her hard, her fingers locking with his as he deepened the kiss. Sliding his tongue between her sweet lips, he tasted her. She stroked her tongue against his, and he released one of her hands to sink his fingers in her hair, to hold her against him.

She let out a whimper, and it was sheer fucking torture.

Pressing his cock against her stomach, he let her other hand go to grip her ass tightly, squeezing the plump flesh through the fabric of her pajamas.

This was exactly how he imagined her.

So perfect and right against his body.

She let out a sweet little gasp, and the sound drove him crazy. Running circles across her ass, he stroked down, cupping her knee to draw her leg over his hip. Rocking his cock against her pussy, he wanted nothing more than to tear their clothes off, to feel her riding his dick as he slid in deep.

There wouldn’t be any condoms either. He wanted to feel her silken cunt wrapped around him.

Breaking from the kiss, he trailed his lips down her neck, sucking on her pulse.

Another great book by Sam Crescent. I love the Nanny series of books and this one is no exception. Tessa is the nanny for Alonzo&#039;s sister, Jessica. Her father was a &quot;soldier&quot; in the mafia family but when her parents are killed, Alonzo takes her in. He&#039;s in love with her but has waited for her to grow up a bit. There is some drama, some danger but through it all, he is determined to get Tessa to fall in love with him. The build up of the story was good and the characters were all interesting, although there were a few that I wouldn&#039;t mind seeing go bye bye for good! Also, I would love to see Alonzo&#039;s two guards get a story. Loved them! Great book for an afternoon or evening read!!!! Just have some ice water handy as it gets pretty steamy at times!

The book was amazing I loved so much i couldn&#039;t stop reading till I finished reading it

Great Book! I devoured it in about 2 hours.I loved Alonzo and Tessa’s story.I have read many books by Sam Crescent and she never disappoints.

Hell yeah Sam Crescent this book was so damn good. Safe. Virgin h. Story line was wonderful. Reminds me why I love your books.

I love Sam Crescent! I love her books! I really enjoyed reading this book. It was fun reading Tessa try to just remain the Nanny and Alonzo was having none of that because she was his! You need to read this!

I love this book! This story started out hard and dark where I wasn’t sure our poor nanny would be able to navigate her way through. But it ends on such a positive light. All it took was sticking to her beliefs and she was able to affect so many people in such a wonderful way. I loved the HEA! I would love to see Jessica find her HEA, she has already come so far.

I really don&#039;t know, how I feel about this one. With this story I had a lot of ups and downs. There will be something that I liked, and then something happen, that I feel opposite. Tessa was too pure soul for my taste. It&#039;s nothing wrong with it, it just I love at least a bit wickedness in h. And I found myself thinking that she so didn&#039;t fit into Alonzo world. But then again, because of that puriness, she needs a monster to protect her from other monsters in this world not to be eaten. And talking about the monster.... I liked Alonzo and his intense focus on Tessa. Especialy close to the end, when he completely opened about his feelings. I kinda was... ... ... ... ... Yeah, exactly, like that. I wanted to say something, but I had nothing to say. Lol What I didn&#039;t liked.... I really can&#039;t spoil it, but he really dissapointed me in one moment. Before I gave him benefit of doubt but after that moment... Tessa tough... Damn, in that moment I was so freakn proud of her. Good thing, he changed his view on that, but I still felt let down. Also, I felt like it wasn&#039;t resolved, especially where it concerns theirs children in the future. I would liked, if they had talk about that and what to do about it.