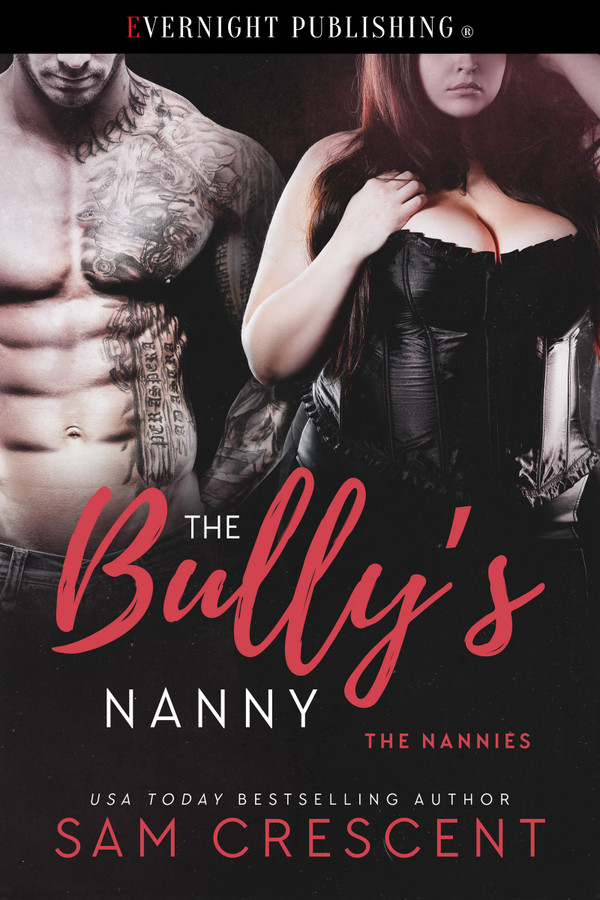 When his wife leaves him with a four-year-old, Drew Gold doesn’t know how to cope. His home’s a mess, he sleeps when his kid does, and he hasn’t been working. His brother suggests a live-in nanny.

The person to answer his call? Callie Stewart, a girl from his past. The one he used to bully, and now she’s here offering him salvation. She should walk away from him, but she’s not cruel. Taking care of his kid will be a breeze, but will she be able to handle living with her bully?

Drew likes her curves, her smile, her laugh. He doesn’t know how he failed to notice her before, but there’s no doubt he wants her. When an argument between them escalates, the fire burns brighter than ever. One touch is all it takes for both of them to get burned.

Everything Callie thought she knew about Drew comes crashing down around her when his wife comes back to town. Now Callie needs to fight more than ever for the love of her man. He should stand up and fight, but will he realize he’s not in this alone?

After closing the door, she picked up a couple of Meghan’s toys and took them upstairs to her room.

Drew wasn’t home. Callum had let her know he’d been dealing with a couple of last-minute problems and would be home as soon as he finished. She hoped he didn’t return until after she’d gone to bed. This was their first time alone. She wasn’t afraid of him or anything. Just nervous.

The tension between them had been mounting.

She didn’t know if she was going crazy imagining something that wasn’t really there, or the only one to feel it. Drew never made any inappropriate moves or said anything to give her cause for concern.

She walked back downstairs and paused as the door opened. Drew entered as she came to the bottom.

“Yep. She packed two bags to go for an overnight stay.” She laughed. No matter what she tried to say to Meghan about it being one night, the young girl knew her own mind and what she wanted. Who was she to refuse? “How are you?” she asked.

“It has been a long day. I need something to eat.”

“Actually, there’s something I want to talk to you about.”

“Okay.” She walked into the kitchen and pulled out the pasta casserole she’d been keeping warm. It was only a small casserole and she’d eaten her portion.

“I don’t want you taking Meghan to the park anymore.”

Of all the statements he could make, that hadn’t been the one she’d been expecting.

She paused in serving him up. “How is it not safe? I was there.”

“And clearly you weren’t keeping an eye on her if you allowed a boy to bully her.”

“The boy didn’t bully her. Meghan got up and she came over to me. I was going to talk to the boy’s parent, but she asked me not to.”

“And you take your orders from a four-year-old?”

“Wrong. I’m your boss. You take your orders from me. You will not take my daughter to the park anymore. There’s no way I will allow her to be bullied.”

She couldn’t help it, she burst out laughing. “Seriously, you’re going to get defensive because your daughter encountered a bully? Do you even know what she did to retaliate?”

“Well, tough, because seeing as I’m still dealing with a type of bully right now, I’ll tell you. She walked right up to that boy, and she climbed the ropes, proving to him that he couldn’t push her down. He could tell her she couldn’t do anything, but with her head held high, she proved to him that she damn well could. You don’t have to back down from bullies, nor do you hide from them. You prove what they say and what they do mean nothing to you.”

“Is that what you’re trying to tell me now? Huh, I mean nothing to you?”

“What’s it like, Drew? One day you’re going to have to realize there are going to be guys just like you, only this time, your daughter could be the target. How does that feel?” Callie asked.

He stepped around the counter, advancing toward her.

She took a step back until she hit the wall, hindering her escape. What was she doing? This wasn’t professional. This was her past clouding her judgment. Pissing her off. She shouldn’t even be allowing it to get in the way, but she was.

She hated it. Fuck.

Drew slammed his arms down on either side of her head. “And what if my girl is the next Tilly, and it’s someone like you that she picks on? What then?”

“Yeah, well, let me keep up with the tradition.” Before she knew what the hell was going on, his fingers were in her hair, he pulled the strands back, and his lips were on hers.

I don&#039;t read a lot of &quot;bully&quot; romances because they tend to be really cruel but whenever Sam Crescent writes one, I get it! This is another hit for me. I loved how the heroine is the kind of woman who isn&#039;t weak or a doormat but it still tempted by the bully from her past. He may have been a jerk to her but times change and even bullies deserve a second chance. He knows what he did in high school was wrong and he owns up to it! Wonderful story, a wonderful second chance and I adored the little girl. She kind of stole the show in some parts! There was some OW drama when the ex came back to town but it was quickly taken care of. One of my favorites in this series!!!

I loved this story!! Sam Crescent write such wonderful books. Drew was Callie’ bully in HS, now suddenly he is a single dad and needs her as his live-in nanny..... I’m so glad I read this book and totally recommend it.

Bully books usually make me uncomfortable to read but Sam&#039;s spin on it is worth reading. My heart broke for Drew and it shines a light on abuse that most don&#039;t recognize. I applaud Sam for this and capturing the emotions of her characters so well.

Once again Sam has written an awesome book. I have read all of the nannies series and loved all of them!

I really enjoyed this book. Had some turns I wasn’t expecting. Love being able to read both characters POV.

This book has so many layers that I already want to read it again to see what I missed the first time. The author really did a fantastic job with these characters, she made them very realistic and she made them both face the past to be able to embrace their future. I love how she merged the bully and the nanny, she brought an awareness to the many facets of bullying that most people overlook. And I just really enjoy her nanny series, this one is certainly a jewel in her crown. I can’t wait to read the next book she writes.