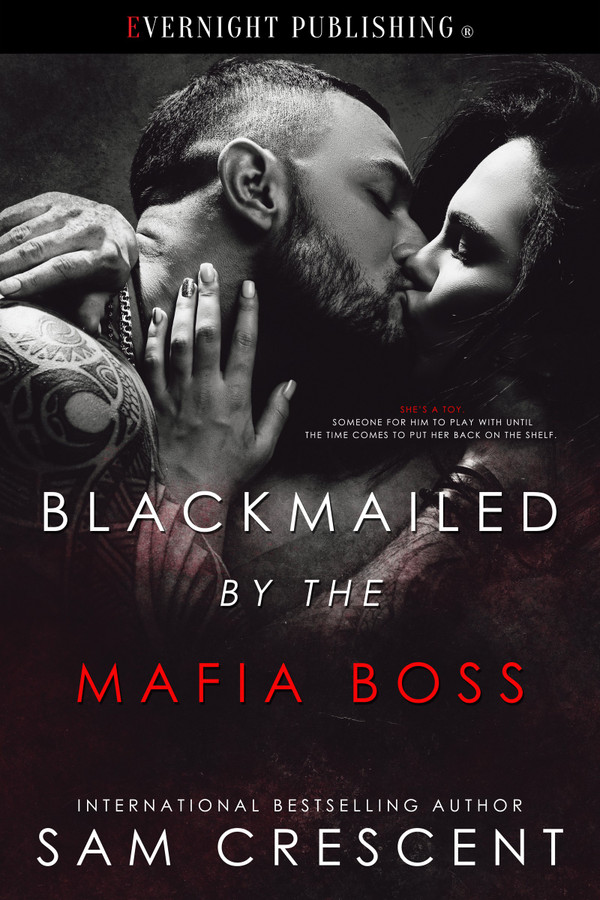 Avery Finch will do anything for her father—even sell her body to the city’s Capo, Gino Mazza. This man has already broken her father’s legs, and there’s no way she could allow Gino to hurt her father again. Whatever Gino wants, he can have.

What Gino wants is a toy. One look at the passionate brunette, and he knows he wants her. He can do with her as he pleases, and for now, it’s to watch, to tease, to drive her crazy with lust. He wants her to beg for his cock before he’ll give it to her.

Each day is sheer torture. Gino is not what she expected. He knows how to make her crave his touch. She’s not a virgin, but compared to Gino, she might as well be.

Gino is addicted to Avery. He wants to hear her pleasure, to feel her wrapped around him, and to consume every single part of her.

He has to remember she’s a toy, to play with until the time comes to put her back on the shelf. Does he have to let her go? Or must Gino realize there are times he can’t have it all…

Lifting her head out of the water, she ran her hands across her face and gasped.

Gino was inside the door.

“I’m pleased to see you’re not trying to hang yourself or slit your wrists.”

“I’m not going to kill myself. Besides, there’s nothing here to use.”

She crossed her arms over her chest, trying for modesty. “Only to see if there was something to wash with.”

“Do we need to continue this power struggle? I’ve got it all. You’ve got none.”

She gritted her teeth.

Gripping the edge of the tub, she stood up. Keeping her hands at her sides, she waited. As she stared him in the eye, Gino smirked, and his gaze traveled down her body before moving back up to her face.

He put down a towel. Much to her surprise, he began to strip out of his clothes.

“That bath looks too good to pass up.” The jacket was gone, and she saw the gun inside. Next, his shoes were gone.

He was stripping fast, and she couldn’t think.

She sank down into the water, scrambling her brain to think of what to say to stop him from trying to join her. Nothing came out. Her mind was a complete blank. There was nothing to say, and as he removed his boxer briefs, she couldn’t believe the size of him.

The only experience she had was one lover. That was it.

The night she lost her virginity was the one and only time. That alone didn’t prepare her for this.

Gino wasn’t a small man. He was all man and then some.

This was so far out of her comfort zone.

He climbed into the tub, and she curled her legs against her chest, trying to get as much distance between them as possible. Gino didn’t seem to care. He spread his legs down either side of her, his feet touching her.

She stared past his shoulder, trying to think of a million other things than what was going on at this moment.

“You can ignore me all you want.”

“Will I be able to go home? Grab some of my things?”

“No. The life you had before is gone. You’re not going to get it back. I’ll have some things brought to you.”

“You’re to stay here for as long as it amuses me. You’re my plaything and consider this room your shelf.”

She wanted to claw his eyes out. She didn’t believe in violence though, and she stayed perfectly still.

“You can earn certain privileges.”

He didn’t say anything.

“How can I earn them?” she asked. She couldn’t even believe she was contemplating this. It was ridiculous to her. She was a grown woman. There’s no way she should be entertaining this man. Of all the people her father could have gone to, Gino Mazza should have been the last person.

She wasn’t going to cry, even though her tears were so close to spilling. The only way to survive this was to do as this man wanted and to not cry.

She wasn’t weak and hadn’t been for some time. Her father always said she was a strong woman and only the right kind of man would ever be good enough for her. This man wasn’t it, and just because he’d caught her unawares, didn’t mean he had all the power here.

So long as she held her own, kept him entertained, her father would be fine. She had to believe that.

Lifting her head, she met his gaze head-on. Slowly, she lowered her legs, leaning back. She wanted to cover her chest from his gaze, but that wouldn’t do.

This was a risk. What was Gino looking for in a toy?

She had to play each interaction with him to capture and to keep his attention. There were more experienced women, more beautiful, more everything. Either way, she wasn’t going to change who she was.

“Good behavior, orgasms, pleasure, and even pain, will get you the passes you need. You won’t ever be allowed to wander my home freely. I’ll be your guide.”

Meet Avery Finch who is taking care of her father’s store since he was injured by the mafia because he could not pay up. When Gino Mazza enters the store looking for her father and the rest of the money owed, he is confronted by Avery. We have sparks. As she does not have the complete amount Gino threatens to injure her father more. She is desperate to keep her father safe, so she offers herself as payment. Like he’ll tell her no? The interplay between them, plus her devotion to her father, made the characters more realistic. I liked how the author rendered them. I didn’t like Gino at times, but that worked because he needed redemption. What I did like was her journey. She comes to terms with her desires–what she wants in the bedroom, what she needs and that toys are just as much fun as the real thing. The changes in both characters are fulfilling and deeper than I expected–which is great. I thought it was strange how easily Avery accepted her situation and that even though she has only had sex once, she is not embarrassed by all the new situations. She does not try for her freedom either, although there was no way she could have found a way out but she didn’t even think of it. This isn’t a rosy romance and readers looking for such might not get what they want from this story. This is a short novel that shows you can’t push away love when it enters your heart. It also shows that it is okay to learn about your own sexuality without consequences. They both learn that you can’t fight a connection that goes soul deep. If you want a romance that’s not status quo, then this might be the one for you.

This story didn&#039;t hooked me. The beginning and ending was good, but middle wasn&#039;t working for me. I didn&#039;t connected with Avery. There was more then once, when she acted in a way I wasn&#039;t fond of. And Avery very quickly forgot, why shes at Gino place. It was like they were dating and not her agreeing to be his toy. I always found myself flapping like a penguin with Avery. Gino... I have conflicted feelings about him. He&#039;s dangerous and arrogant d¡ck, but... He started well, but then he fizzled out. Gino like Avery seems forgot about why they ended together. Sure, he will still use phrase as &#039;You&#039;re my toy&#039;, but it kinda lost the power and he seemed to loose his edge. And Averys father... I&#039;m not sure if he was a selfish pr¡ck, or just clueless idiot.

Avery and Gino meet on not so normal terms, she gives herself to him for a debt. Wow, these two start out as just a job for one another but soon becomes so much more. The way that Gino is with Avery is both sexy, hot and sweet.

When Avery&#039;s father borrows money from Gino and can&#039;t pay it back in time, Gino decides that Avery will be his until her father can pay his debt. This was a quick read and I liked it. It did start out kind of slow but as I kept reading, it just got better and better! I loved that while Gino was a hard as steel mafia boss, Avery intrigued him. There isn&#039;t a lot of sex which I rather enjoyed because I really loved the story. But the sex, when it happens, is smoking hot!!! Sam Crescent has again written another great story and I highly recommend this to her fans.

I loved the book so much it was amazing awesome incredible I couldn&#039;t stop reading Sam crescent has away and of make u fell like your in the book it&#039;s amazing

Blackmailed by the Beast by Sam Crescent