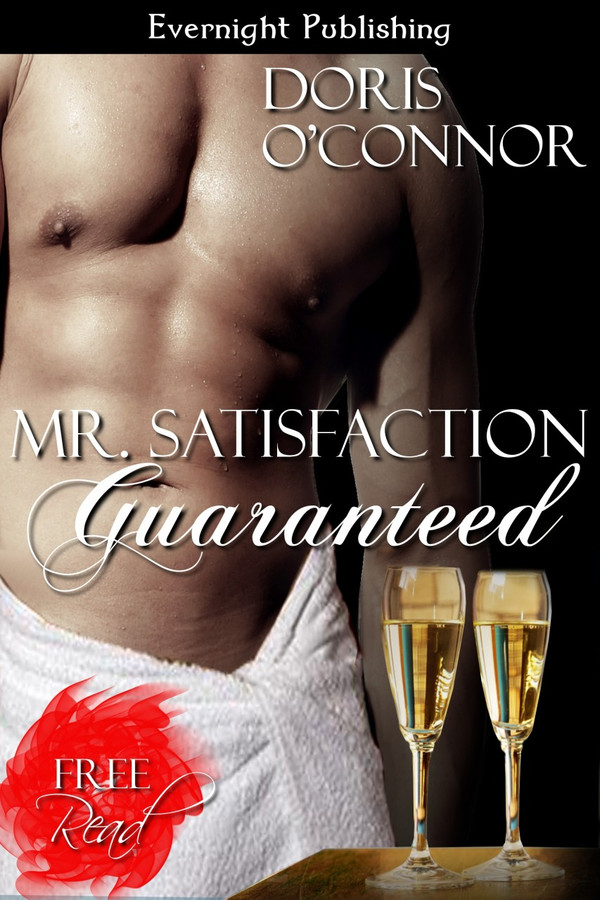 Can an invitation-only escort service really change your life?

Stuck in a rut and desperate for a good lay, Anna spends a fortune to meet with the mysterious Mr. Satisfaction Guaranteed. But can she really go through with a night of no strings attached, paid for sex? Has she become that girl?

And can one man really fulfill all her fantasies? Only one way to find out.

SG's amused chuckle settled on her skin, flushed from the previous few minutes of struggle, and she huffed out a breath of air in annoyance.

He raised an eyebrow at her exasperated, "Harrumph," and she stopped fidgeting at the forbidding expression on his face.

"Turn around and put your hands on the wall." The tone in his voice brooked no arguments, and Anna hastened to do as she was bid.

She held her breath at the sensation of his hand sliding over her exposed skin, before it settled in the middle of her shoulder blades. A slight tug later and he pulled her zip down with infinite slowness. His knuckles grazed along her spine and the cool air on her heated flesh made her clench her thighs together to relieve the throbbing ache in her clit.

He growled his annoyance and yanked her hair hard enough to bring tears to her eyes. He pulled her head back until it rested on his shoulder and kicked her legs apart with his foot.

"Keep your legs spread!" His hot breath whispered across her face and Anna whimpered when he pulled the hem of her dress up, exposing her stockings.

"So beautiful, my pet." He released his hold on her and stepped away." Now, again, turn around and strip…slowly."

She did as she was told and let her dress glide down her body slowly, until it pooled round her feet. She stepped out of it and, with a coy glance in his direction, kicked it up and towards him. He caught it easily, lifted it up to his face, and inhaled. Their eyes met and his darkened as she undid the claps of her bra and her stomach clenched in anticipation. Her skin heated under his intense gaze as her breasts fell free. They turned heavy under his quiet perusal, his increased breathing, and the way his cock tented the towel, the only indication that he was as affected as her by her little striptease. Her nipples jutted out proudly, begging for his touch and she almost lost it there and then, seeing him lick his lips as if in anticipation.

"Touch them for me. Roll those greedy little nipples between your fingers to make them ready for my touch."

"That's my girl." He stepped closer and, taking her hands, pulled them up in the air above her head. He held both her wrists in one hand whilst the other cupped each breast in turn and then skimmed a path of heat down her quivering tummy until he reached her thong. Her knees buckled when he used just one long finger to stroke her clit through the sodden fabric.

He murmured his approval at the wetness he found there and pushed her back against the wall.

"Are you fond of these?" He growled the question into her neck, whilst tightening his hold on her underwear until it pulled tight against her clit and dug inside her slit. She instinctively spread her legs wider to give him better access and he smiled when she shook her head into his shoulder.

"Good." With an audible rip, the delicate fabric gave way and Anna panted her arousal at the feeling of cold air across her swollen folds.

He again stepped back and lifted the remnants of her thong to his nose.

"So sweet. I'm looking forward to tasting all that bounty. Give me your hands, my pet." She did so, and he used her thong to tie her hands together. "Wiggle your fingers for me to make sure that's not too tight."

"It's not." She barely recognized the needy voice speaking the words. Heaven help her, he'd barely touched her, and she was so aroused that the slightest friction against her clit would send her tumbling into release.

He stepped back again and the slow perusal of her body gave her delicious tingles all over her skin. Dressed in nothing but her stockings, suspenders, and heels, with the evidence of her arousal trickling down the inside of her thigh, she felt wanton and free. The rational side of her brain thought it odd, this intense reaction. She was restrained and completely at this man's mercy. How could she feel free? Yet her deeply buried submissive side— the one she had denied for years—rejoiced at this lack of control, this giving of herself to another person. Anticipation coursed through her veins at what was to come. Whatever was about to happen on the other side of those doors, she would embrace it with all her being.

"You think too much, my pet." The deep voice wrapped itself around her senses and a renewed shudder went through her. "Walk through to the living room in front of me and stand in front of the bed."

I wanted to let the reader know that I know that my reviews tend to be a bit obscure sometimes especially when I review short stories such as this one I’m about to review. I would like to point out that I tend to do this because I don’t want to give anything away and I’m always afraid that I’ll say that one thing that will ruin that one moment when everything is revealed to the reader. I know that I would be annoyed if something was revealed when it shouldn’t be. Not cool. This was a really entertaining read. That needs to be addressed right away. I’ve read Ms. O’Connor before and so far I haven’t been disappointed. Her books are emotional, intense, sexual and wickedly hot. When I saw the title of this book I knew I needed to read it…who doesn’t want a Mr. Satisfaction Guaranteed? I had hoped it would be an entertaining read and it was and then some. As I said, it was intense and emotional which I love and as the reader I felt the characters emotions, and I loved the twists and turns Ms. O’Connor put the reader through while the characters discovered each other. Anna is a women looking for a man to satisfy her sexual fantasies and make her feel desirable…who doesn’t feel like that? I couldn’t blame the character for feeling this way. She displays her wants and her hesitancy about this man that any woman would understand and feel as if it’s her that’s there. I love that. It makes me like Anna as if I have something in common with her. She’s strong emotionally and is a sexual person and she isn’t afraid of that. Then we have SG, that’s what the male protagonist calls himself. He is…wow. Strong, sexy, masculine. *sigh* I loved him. He knows what he wants and isn’t afraid of going after what he wants. He’s powerful and commanding but he has compassion and understanding. He seduced me (and Anna), with his actions and his words. I hope he does the same thing for you the reader if you choose to read this book.

What a hot little read by Doris. This is the first time I&#039;ve read anything by this author, but I plan to read much more now. Her characters were strong and appealing. Anna is lonely and looking for love and acceptance. When her friend introduces her to Mr. Satisfaction Guaranteed, he definitely delivery all of the above. I love how there was a little mystery wiggled into this story. Great read.

Anna just wants somebody to love…and to have them love her in return. She is tired of hiding her kinky side, and she is definitely tired of being treated like a freak if she mentions wanting someone to tie her up. Her friend has the perfect solution, and even though he costs a fortune, there is always “satisfaction guaranteed”. Mr. Satisfaction Guaranteed is a short read with a BDSM theme, two sexy characters and a little suspense mixed in. The sex is sizzling, but I would love to have gotten to know the characters a little better outside of the bedroom. Overall, for the length, it is a very entertaining read.