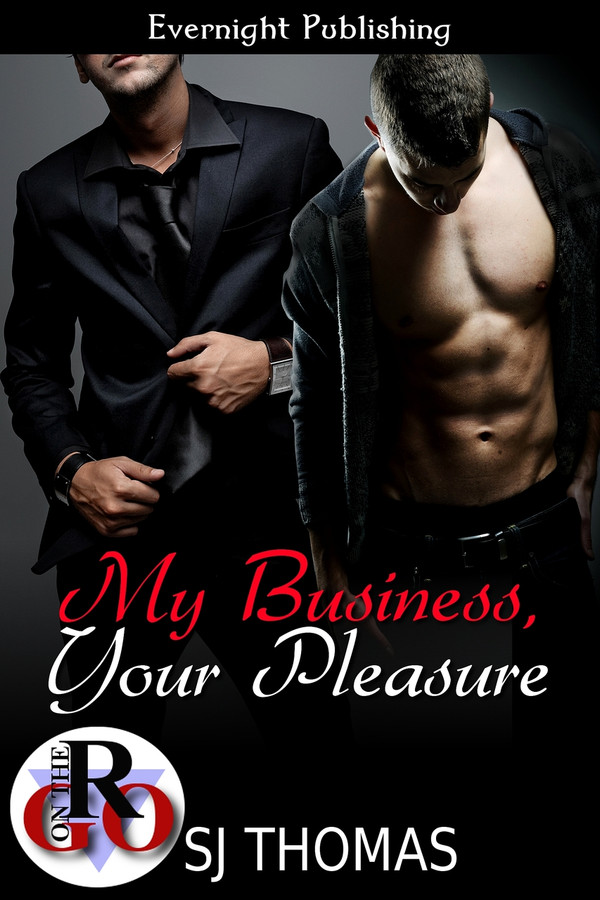 Justin has one rule: never get involved with immortals. It's bad for business and dangerous. Trouble is his business partner Elliot—an immortal being with undeniable sex appeal—makes him want to break that rule.

Hoping a night with an immortal will get this infatuation out of his system, Justin visits a rival club looking for a one-night stand.

Elliot has wanted Justin for ages, but despite his best efforts has gotten nowhere. So when he learns about Justin's plans, he turns up at the club, hoping one night will turn into many more.

Will Justin let down his guard and let Elliot become his partner in more than just business?

Elliot ignored the bitter accusation in Justin's voice, shrugging out of his jacket before he closed the curtains. When Elliot faced him, Justin stood with his arms crossed over his chest, his tousled dark blond hair falling across his brow, his usually calm, almost delicate features brimming with anger. Elliot suddenly found his courage failing him.

When he didn't speak, Justin narrowed his eyes. "Well? You wanted to talk, so talk. How did you find out about this tonight?"

As he looked at the man he wanted, Elliot knew he needed to be honest with him. "Kara helped me."

"Yeah, she figured out your plans and clued me in."

"She what? I can't believe this. She is so fired." Justin paced back and forth for a few seconds, and then stopped, his head jerking toward Elliot. "How did she know what I was up to?

"Kara's smart and she knows you too well. Plus she worries about you. She thinks you work to hard and worries that you're lonely."

Justin's brow furrowed as he shook his head. "But why did she tell you?"

"She's a good friend, and she knows how I feel about you."

A sharp intake of air was Justin's only reaction, and Elliot forced himself to carry on. "I've wanted you for ages, Justin, but I knew you'd never go out with me. Your damn rules about not getting involved with immortals would stop you. She thought if I got you away from work, then you might admit your feelings for me. If I could get you to see me as something other than your business partner." He gestured down at himself.

Justin followed the movement, his gaze sweeping over Elliot. His full lips parted, eyes darkening with obvious lust and Elliot's cock swelled in reaction, body growing hard with desire. His tongue darted out to wet his lips, and Elliot stifled a groan.

Justin spoke in a husky voice. "I'd have never thought you could pull that look off."

Elliot shrugged. "I've had many different looks in my life." He offered a cocky smiled. "And I've rocked them all."

Justin's mouth twitched and hope flared within Elliot, until Justin shook his head. "This," Justin gestured to the champagne, "and you," he nodded toward Elliot, "doesn't change anything. Why would you think it would?"

"I know you are attracted to me, but you've never acted on it. I tried so many times to take our relationship further, but you always shut me down."

Justin's brow furrowed, his expression turning pained. "You know why I have my rules. The club runs better if we don't get involved with the clients—"

"I'm not a client." Elliot's voice was harsh in the snug confines of the booth.

"No, but you are an immortal. How can I tell our staff to keep their distance if I can't myself?"

"So, what is this all about then?" Elliot tilted his head toward the club. "You came here for a one-night stand with an immortal, a stranger. Is that keeping your distance?" Anger and frustration flowed through Elliot. The thought of Justin fucking some random immortal who'd do God knows what to him, filled Elliot with rage. Vampires bit, werewolves clawed, and some breeds of demons tasted their lover's souls. Image after image of immortal creatures hurting Justin flitted through Elliot's mind.

"I was doing it to get over you!" Justin shouted, and that nasty little creature called hope once again flared inside Elliot.

"You do want me then." Elliot spoke it as a statement, not a question.

Justin ran his fingers through his hair. "Maybe I do, but I'll never act on it. I am not going to risk our relationship for one night of sex. And I couldn't face myself if I was such a hypocrite." Justin shook his head. "This isn't what I wanted tonight."

Despair and frustration fueled Elliot's next words. "No, I know what you wanted. A night of make-believe with some random guy. Well, get this straight, if you aren't going to be with me then you're not going to be with anyone else, mortal or immortal. I'm not letting any other creature get his hands on you."

Elliot didn't answer. He just lifted his chin and set his lips in a stubborn line.

Justin laughed bitterly. "You immortals, thinking you own the world. This is exactly why I don't want to get involved with your kind. I see the possessiveness, the control you want over your lovers." He stomped over, getting right up in Elliot's face, sexy as hell in his anger. "No man, mortal or immortal, owns me. No man will control me, got that?"

He'd never seen Justin so angry, so forceful. All Elliot wanted to do was take Justin in his arms and crush their lips together. "You're sexy when you're angry, you know that?"

Justin's lips parted and he gave a sharp exhale. "You are unbelievable. And I am not going to do this."

He went to step away, but Elliot gripped his arm, stopping him. The look Justin gave his hand would have sent an enraged demon running, but Elliot refused to be frightened off that easily. "Justin, please. Don't walk away from this. You have no idea how good this could be."

Justin’s gaze flicked up to Elliot's face, and for the briefest second Elliot saw indecision in those hazel depths. Then Justin's jaw tightened, and with a methodical movement he took Elliot's hand and forced it away from his arm. "I can't do this with you." Justin's voice was strained, full of anguish, and as he yanked aside the curtains and walked away, pain speared through Elliot's chest.

Elliot let out a ragged breath, his gaze tracking Justin as he weaved his way across the dance floor. Shit, that couldn't have gone any worse. He stood for a moment, unsure whether to follow or just let Justin go.

No. This might be his only chance to have Justin, and even if all he got was a single night, Elliot wanted it too much to give up without a fight. Elliot squared his shoulders and stalked across the dance floor.

Justin has a hard and fast rule at work – staff does not fraternize with the patrons. Just causes heartache and is dangerous (as evidenced by the near-miss of the barman with the siren). This rule applies to himself as well. Very difficult since his business partner, Elliot, is an immortal, is a gorgeous incubus and Justin wants him more than anything. But no, not going to happen. In an effort to get the lure of Elliot over with once and for all, Justin decides to hit a rival club and hook up with an immortal. All in vain, however, when a coworker clues Elliot in on the hook up plan and it is Elliot that Justin meets at the club. The meeting doesn’t go well. Despite Elliot’s best efforts (and I loved seeing the incubus shy) Justin isn’t happy Elliot found him, he’s pissed at Elliot’s possessive manner and then he’s about to be the hook up of a vampire. This just can’t get worse. Well, until Elliot protects him and is injured by that same vamp. This was an interesting take on the incubus because Elliot wants more than just sex and Justin isn’t going to give him more than that (and even that is questionable- he wants to help Elliot heal from the vamp attack is all). Justin is protecting his heart and that’s going to take a lot to overcome. I liked them and I liked the world very much, if the ending was a little rushed. I would definitely read more of this.

MY BUSINESS, YOUR PLEASURE is the perfect short novella with a well-developed romance set in a good paranormal world. Justin has always wanted to explore a personal relationship with his business partner and sex demon, Elliot, but he&#039;d be breaking his own rule of no messing with immortals. Justin decides to have a one night stand with any immortal to attempt to work out his attraction, but Elliot learns of his plans and shows up at the club. Elliot uses every trick in his seduction arsenal to convince Justin they should be partners in more ways than just business. I loved this novella. Justin and Elliot are complete characters and I could see their attraction to each other. It&#039;s rare that an erotic novella manages to simultaneously build an emotional connection between the leads but this novella does it. The novella wisely had Justin and Elliot know each other well before the night their relationship changes so the romance develops in believable ways. I especially liked that Elliot is so open about his feelings for Justin and how he uses sex to show Justin. Justin&#039;s rule of not having a relationship with immortals is the perfect tension to keep the men apart initially and I really liked how this unfolds. The other great thing about this novella is that it&#039;s set in a strong paranormal world but it doesn&#039;t overwhelm the romance. Elliot is a sex demon and how this plays into who he is and his relationship with Justin is all integrated so well. I like this world of immortals so well that I hope the author continues to set novellas in it. MY BUSINESS, YOUR PLEASURE is a wonderful romance I highly recommend to MM readers.

Elliot is an incubus who’s a business partner to Justin. Justin has one rule, never get involved with an immortal but rules are meant to be broken when love is involved. This is the first book I’ve read by SJ Thomas and I was pleasantly surprise. The book gets right into the story but it’s not in the middle of some scene to confuse the reader. It was well done and I instantly connected with Justin. From how he talks about Elliot, I couldn’t wait to get to know him too. Elliot was fabulous, a sex demon who never missed the opportunity to flirt. The story was quick but really well done. I enjoyed it so much. The characters are still lingering in my mind. My Business, Your Pleasure is a hot, entertaining read.

This is the first book I’ve read by SJ Thomas and I was pleasantly surprise. The book gets right into the story but it’s not in the middle of some scene to confuse the reader. It was well done and I instantly connected with Justin. From how he talks about Elliot, I couldn’t wait to get to know him too.

Strokes of Pleasure by Anne Rainey