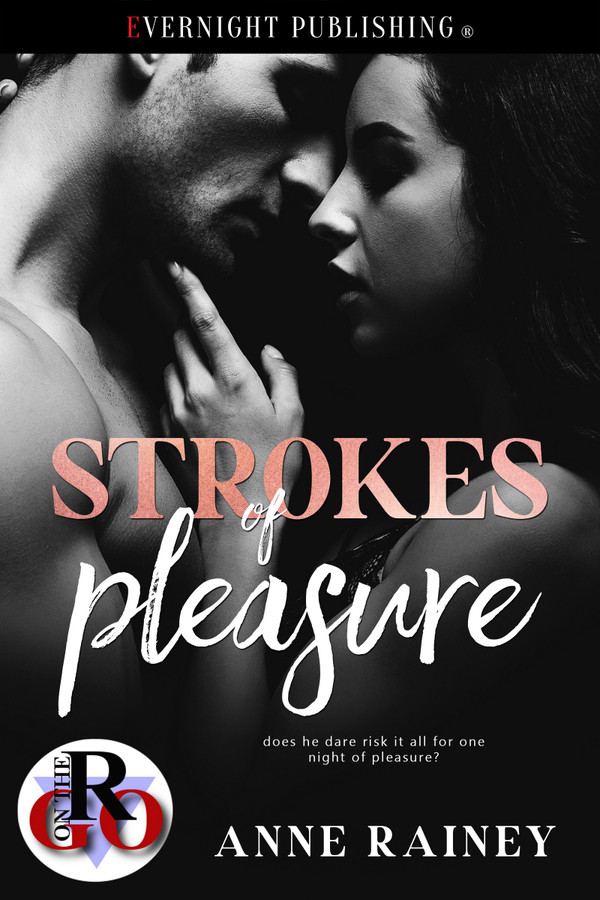 Mila Porter’s curvy figure is half the reason Slade River friend-zoned her years ago. Does it matter that she’s had the hots for him for as long as she can remember? Sure, but she’s a realist. So what if she does fantasize about him from time to time? That’s her business. When the annual charity dinner at Mila’s work comes up, Slade offers to be her plus one. An act of kindness, that’s all it is. Or is it?

Slade would be lost without Mila. She’s the most important person in his life. And imagining her naked is a huge no-no. Sex would mess up everything. But when Mila starts talking about a co-worker she’s dating, Slade begins to see his best bud in a whole new light. A sexy, curvy get-his-hands-on-her kind of light. But does he dare risk it all for one night of pleasure?

Slade drummed his fingers against the granite countertop in his brother’s kitchen. All he could think about was Mila. And her date. With Mister Romantic. Why did the image give him a sick feeling in his gut? He tried to imagine her as she’d been earlier. Sweaty from her workout. Blotchy cheeks. Breathing hard. It shouldn’t be a turn-on. And yet, his body responded with a great big salute. What would she wear for her date? A skirt or jeans? He’d never seen Mila in a skirt and yet he could still picture it in his head. Those long, shapely legs and her round, squeezable ass. His hands itched to touch her. Damn it already.

His brother slid a beer toward him, then leaned back, crossing his arms over his massive chest. Like Slade, Ari worked out. Lately, it seemed as if he’d gained a solid twenty pounds of muscle, though.

Ari ran a hand over his shaggy chestnut brown hair, then asked, “What the hell is wrong with you?”

Slade didn’t want to share his thoughts. Whatever the hell he was feeling toward Mila was private. “What are you talking about?”

“You’ve been piss-poor company all evening. What gives?”

His brother was bulldog stubborn when he wanted something. “It’s Mila,” he blurted. “She’s on a date.”

Slade shot to his feet and paced the room. “So, she barely knows the guy!”

“Yeah, that’s sort of the point of the date.” He tilted his head, his eyes narrowing. “Why does it seem like you’re jealous? You and Mila are just friends, right?”

“Jesus, Ari, of course.” Until today. Until he’d started imagining her naked. Fuck.

“Do something about it!” He shook his head before adding, “You two would be great together. She’s sweet and puts up with your shit. You could do worse.”

And sexy. “And if it doesn’t work out, I’ve lost my best friend. Bad idea.”

Ari sighed. “Listen, she’s pretty wonderful. How long do you think a woman like that will stay single?”

Slade imagined Mila in a wedding gown, walking up the aisle to kiss another man’s lips. It wasn’t a pleasant image. He pounded back the last of his beer and slammed the bottle onto the counter. “Enough about Mila. I didn’t come here for that.”

“Fine, let’s go over that bid for the grocery store chain. We get our ducks in order this could be a big deal for us.”

“We need it. I swear, I’m running on fumes lately.”

Ari grumbled a curse. “Yeah, I missed a payment on my truck. If Mom was alive still she’d rip me a new one and tell me to get my ass in gear.”

Slade smiled thinking of the woman who’d raised them. She’d dedicated her life to being a mother. Then a heart attack had taken her from them. “She never cut us any slack,” he replied.

Slade shoved a hand over his face. “Well, we won’t be doing her memory proud if we sit around wallowing in self-pity.”

They spent the rest of the evening working on their bid. Slade and Ari had gone into the painting business together right after high school. River’s Painting Plus hadn’t been the most lucrative, but they weren’t throwing in the roller just yet.

On his way home, Slade’s thoughts strayed back into forbidden territory. Mila and her date. He checked the time on his dash. It was midnight. Was she still out with Nash or had she sent him home with a peck on the cheek? One way to find out. He made a left and headed for Mila’s apartment. It was dumb and none of his damned business, but his brain wasn’t listening to reason. As he turned into the parking lot, Slade spotted Mila’s little red sedan. Didn’t mean she was home though. Was she still out or had she gone home with Nash? Slade gripped the steering wheel tighter before putting the truck in park, content to watch her bedroom window. The lights weren’t on.

“I’m an idiot,” he grumbled under his breath, even as he sat staring at the dark window. “She’s out having a great time and I’m sitting here like a chump.”

Then the curtains fluttered and Mila appeared. She wore a grey nightgown with spaghetti straps and her hair was down around her shoulders. “Goddamn,” he mumbled. She was beautiful. And by the looks of it, alone. That pleased him. Too fucking much. When she reached up and tucked a lock of hair behind her ear, peering down, Slade sucked in a breath. She stared directly at his truck. Did she recognize him? The parking lot was dark and he was too far away. The temptation to go to her was strong. Slip her nightie off and make love to her until the sun came up.

He needed to remember that. She wasn’t into him. And he’d been honest with Ari. Sex would mess up the one good thing in his life. He couldn’t risk it.

When Mila moved away from the window and the curtains closed, Slade let out a heavy breath. It’d been touch-and-go as to whether he was going to shut off his engine and go to her. Now. Just take her into his arms and erase all thoughts of Nash from her brain.

Slade put his truck in gear and took off before he did something completely idiotic. Tomorrow morning they’d go on their hike and things would get back to normal. Sure, he was destined for a few sleepless nights, but if it meant keeping his friendship intact it’d be worth it.

Nice fast-paced story. I was able to read in about an hour. Mila and Slade were great characters even if they were both a little clueless. They have put the other in the &quot;friendzone&quot;. Needless to say that line gets crossed...multiple times!. I received a free copy of this book via Booksprout and am voluntarily leaving a review.

Slade and Mila are well written characters who were best friends. She starts dating and he realizes that he is jealous. The story is well developed and I enjoyed reading it.. I received a free copy of this book via Booksprout and am voluntarily leaving a review.

This is the 2nd book I&#039;ve read written by Anne Rainey; I can’t wait to read more of her books. This is part of the Romance on the Go Series; it is a stand-alone short story. The story is about Mila &amp; Slade; they’ve been best friends for years. When her annual charity dinner for works comes up he offers to be her plus one. I received a free copy of this book via booksprout and I’m voluntarily leaving a review.

This is a short and quick read about friends that become so much more. Slade and Mila have been best friends and workout buddies to a long time. She has wanted more for sometime. He put her in the friend zone and that is where she has stayed. That is until she has a date and he starts noticing her in a different light. Then she needs a date for an annual benefit. He jumps at the chance. This is a sweet and sexy story. I like the characters and the chemistry between them is good. *I voluntarily read and reviewed an advanced copy of this book.*

My Business, Your Pleasure by SJ Thomas