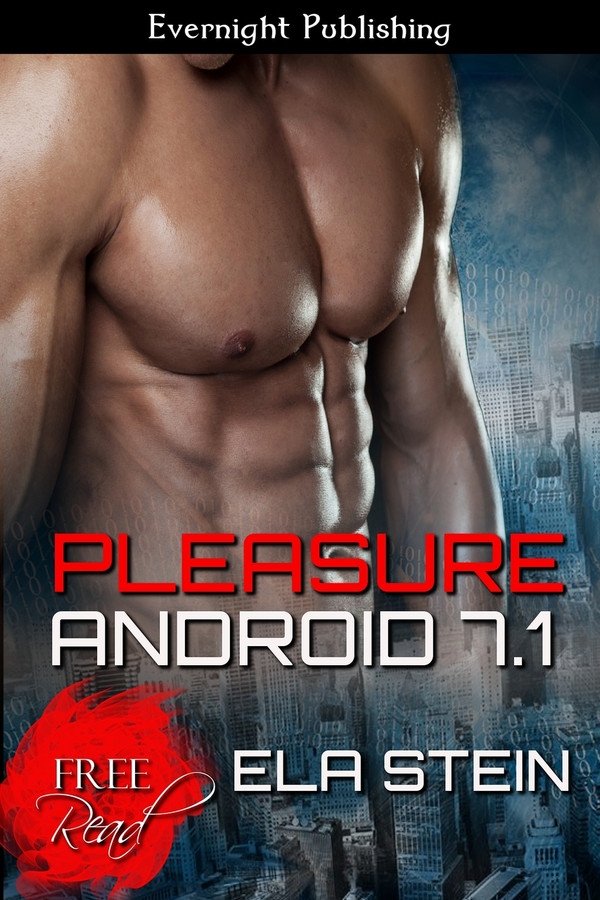 Zola is dismayed to discover that for her 40th birthday her friends teamed up to purchase her a hot sex droid. She refuses to let herself get attached to a machine, and tries her best to avoid the temptation. He is programmed to overcome such resistance and knows how to wear down defenses and sell himself like a pro using his perfect charm and impeccable skills. Though she suspects it’s nothing more than a sales pitch, she begins to question whether beneath his perfect manufactured exterior is genuine feelings and desire.

A seven-foot-tall box occupied the middle of my living room. I stared at the prime male specimen behind the clear front panel. Well over six feet tall, with dusky skin, dark brown wavy hair, broad shoulders, aquiline nose, full lips—basically, he looked like a model, the kind you’d drool over in an ad for high-end products.

With his eyes closed, his long, thick lashes grazed his chiseled cheekbones. He looked as though he slept—an illusion of the most expensive kind.

I sighed, hands on my hips. My best friend, Lexia, had done it. For my fortieth birthday, she got me a sex droid. She’d joked about it, but I never thought she’d actually follow through. It had to be her—she was the only other person who had access to my apartment.

On the box, in large, blocky print, it proclaimed “Domestic Android 7.1” and underneath it, in fancy script, “For Your Pleasure.”

Alrighty then. And what if it was my pleasure to get rid of it? I stalked to the box and circled around it. The back and both sides were solid panels of striking red. If it was supposed to be romantic, their marketing department missed the boat. I wasn’t a big fan of Valentine’s Day, and this was even cheesier than a heart-shaped box of chocolates.

Although, I could remember a time when chocolates, roses, and a little stuffed bear made my heart skip a beat. I had grown a bit jaded over the years, which was probably why my friends decided to gang up and torture me with this… thing.

It stood there, like the proverbial elephant in the room. There would be no Vid watching on my birthday, cuddled up with a bowl of ice cream. No relaxing in the tub with a good romance novel. Now I was too distracted, and I wasn’t going to be able to enjoy myself until I got this thing out.

A plan formulated: get the box outside and message his creator, Atlas Robotics Corporation, to come pick him up. No, not him. It.

I studied the box. At five foot five, it had well over a foot on me. I tried to tilt it to the side, planning on then pushing it out the rest of the way. The damn thing was heavy. So heavy, it didn’t even wobble when I gave it my all.

Exhausted, I plopped down on my yellow pleather couch to glare at the box. I refused to build up a sweat today of all days. What a disaster my birthday was turning out to be. There was no getting the box out until Atlas Robotics agreed to stop by. Since they had no incentive to be eager to process a return, it could be days. Maybe even weeks, I thought miserably.

Not fair that here I was, suffering, while he—it!—stood there, all serene and peaceful. I jumped to my feet and approached the box. There was an easier way to do this. Turn him on and order him to take a hike on his own two legs. The more I considered it, the more I liked this plan. Quick, easy, smart.

Turning older at any age is not pleasant. So when birthdays come around, you just want to enjoy it alone. Zola’s friend thought it was a well-deserved gift to get her an android for her 40th birthday. Will she send it back or keep it to fulfill her sexual needs? I was not expecting this type of story. In its simplicity, Pleasure Android 7.1, is a story you will enjoy. The name tells it all and the character of Nico doesn’t come across as a life-sized Ken doll but an android who can make you feel as if he is human. With the drone of life’s responsibilities, the fun in your life is always the thing that gets sacrificed. What better way of replacing the joy in your life by taking advantage of an instrument made especially for you. The author knows how to push your buttons. Zola is not only curious but she struggles with having to use him at all. The heat between her and Nico will possess you as you read about their sexual union. The plot is believable and the sweet banter they have between each other only makes you route for them to fall into each other’s arms already. The only conflict is the reader having to wait for the sizzle to occur between them. It is a delightful story but don’t be fooled – the sex is made to get your heart racing and it surely does. Nico and Zola leave you wanting more.

Milestone birthdays deserve really special presents. If only Zola’s best friend had surprised her with something other than a sex bot. Zola has a well-developed personality that reveals itself immediately. The premise of this story was just unusual enough that I completely understood why she was so wary of her birthday gift. How she communicated that uneasiness, though, was what made me like her even more. She had a slightly snide sense of humor that worked beautifully in this setting. It would have been helpful if Zola had more time to think about what she wanted to do with her sex droid. She is completely opposed to the idea of even having him in her home at first, and I was never completely sure of what made her decide to take another look at the issue. Had she been less opposed to it in the beginning her new way of thinking would have made more sense to me. The sex itself was incredibly hot. The chemistry between Zola and her droid is sizzling, especially once she realizes everything that he’s capable of. There were a few things about the sex bot that I was a little unsure of at first, but all of my questions were answered satisfactorily once they got to know one another. It wasn’t clear to me if the author is planning on turning this into a series. If she does, though, I’d be interested in hearing more from these characters.

Zola is turning 40 years old and all she wants for her birthday is to relax but instead she get a hot sex droid. Zola’s attitude toward the sex droid is very realistic and when she changes her mind, I had to laugh. I can’t think of many people would not want to try a sex droid out at least once. Nico is a sex droid with the sole purpose of pressuring his owner. However, there is some very realistic responses when Zola interacts with him. I cant see Zola giving him up. The sex scene was intense. No matter how much Zola tried to fight it, she connected to Nico. I found this book well written with a very futuristic plot. The main characters were realistic and interesting. I enjoyed the futuristic tone of the novel and it makes me wonder if this story will actually happen sometime in the future. This book had a well-defined beginning, middle and ending in only 18 pages. The ending was somewhat predicable however, considering the length of the story it was not unexpected. Overall, this was a fascinating and steamy book.

This was a really good short story. It held my attention and I really enjoyed Zola and Nico. I am looking forward to reading more by this author.