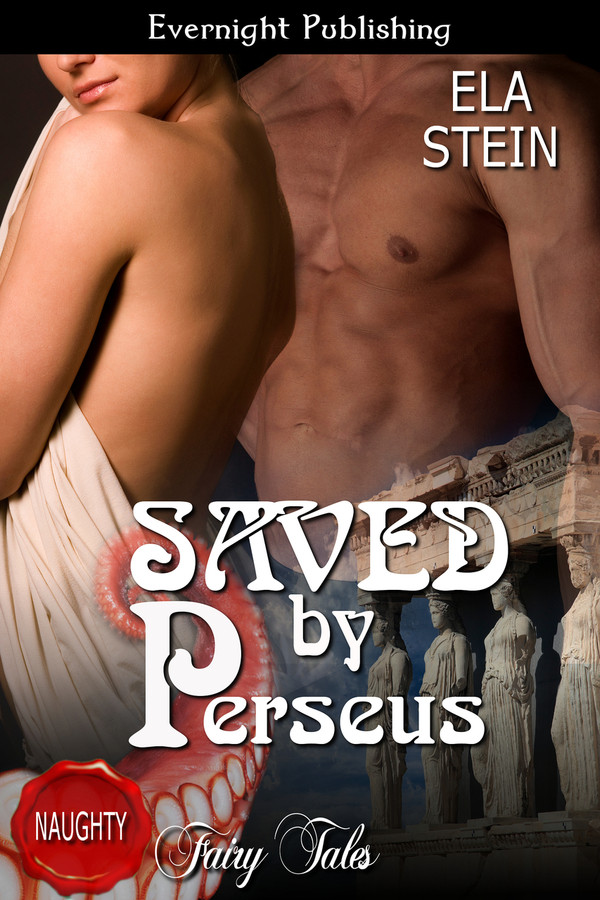 Andromeda’s world comes crashing down when the Gods proclaim that she is to be chained to a rock and offered as a sacrifice to the sea monster that has been ravaging her lands. Terrified, she has no choice but to obey, though the tentacled creature is her worst nightmare come to life, and he has ominous plans for her. Perseus witnesses her plight and comes to her rescue, but liberating Andromeda requires more than just skill with his sword. Will his love be enough to save her not only from the monster, but from her dark past that conspires to never let her go?

When I was a little girl, a snake bit me on the ankle. My mother told the story of how I barely survived, how I had gone in and out of consciousness, flushed with fever, eyes glazed. When I dreamed, I called out about falling into a pit of vipers.

And now before me, my nightmare came to life. Tentacles surged out of the water, but they far more resembled teeming snakes. Unlike octopus arms, they had no suction cups, and ended in blunt tips. Glistening and sinuous, they blindly explored the harsh rock, covering its entire surface, exploring each crevice, and inevitably coming closer and closer to me.

I dug my heels into the rock behind me and curled my toes in. I turned my head and would have shut my eyes, but I couldn’t force myself to stop staring at the monstrosity. Tugging at the shackles did no good and only made the panic surge to a higher pitch until I felt like a wild animal about to become prey.

Only a foot from my toes now, the snake appendages roamed over the rock, some thick and large, like a man’s thigh, and some thin like my little finger. One, about the thickness of my arm, separated itself from the others and moved higher up the rock, coming toward me. I gasped and pulled away from it as far as the chains would allow.

It slithered audibly over the rocky surface and nudged at my toes. I did shut my eyes then, and turned my head into my arm.

It slipped over my foot and wrapped itself about my ankle. I raised my leg and tried to shake it off, but it only coiled tighter about me, digging into my flesh as though to warn me. It wrapped more and more around my lower leg and then began to slowly travel upward, twisting over and over, over my knee and then over my thigh.

I clamped my legs together to halt its progress, but it was far stronger. It wormed its way between my limbs and under my skirt. Slowly it came ever closer to the apex of my thighs, and when it finally reached it, and brushed against my sex, I jumped. The strong muscle rubbed against my clit as it continued to flow upward, along my torso, slowly winding its way. The friction of it rubbing at me terrified and excited me at once. My eyes still closed, I only felt it when other snake limbs joined this one. Another one twined around my other leg, and still others wrapped themselves about my arms.

“My bride,” a rough voice whispered, loud as a thunderclap and yet so quiet I was sure I only heard it in my mind. It carried the same implacable weight of power as the words of the Oracle.

My eyes flew open, and I came face to face with Cetus.

All the necessary components of a Greek myth are evident in SAVED BY PERSEUS. There are gods, sea monsters and incestuous desires. In this naughty reinterpretation, Andromeda is the virgin princess desired by her revolting uncle. Betrayal at every turn is leading to Andromeda&#039;s sacrifice to a sea monster. Honestly, in this story, I had hoped for some dark, depraved tentacle sex or violations in every orifice of this virginal female. This story has none of that, so if that is what you are looking for, this story is not for you. Instead, this is a story where the white knight swoops in to save the day. Perseus spies upon the doomed princess and fights for her. For a Greek-themed story, there is a surprisingly little amount of ultra-violence, bloodshed, sexual violation and tragedy. This tale is short and sweet. There are the typical challenges to the death as well as a familial treachery. The world building is light. The character building is minimal. It&#039;s an easy story to follow, especially for Greek mythology lovers like me. This is a story I categorize as mind candy. It&#039;s sweet and devoured quickly. Will a reader remember this story after they read it? Maybe. It&#039;s a bit forgettable because there isn&#039;t enough naughty erotica. It feels as if the author was going to try for more taboo scenes only to be pulled back and edited to a more vanilla version. There is nothing wrong with this, it just makes a little less of an impact. Overall, it is an enjoyable read. Recommended for romance readers who love heroes saving princesses with a happily ever after.