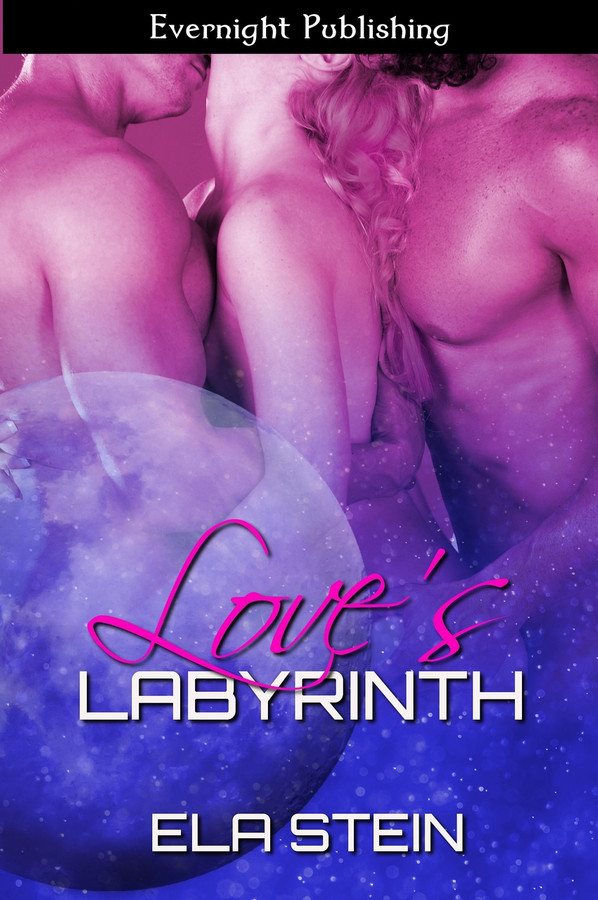 Auria enters the magical Labyrinth on New Year’s Eve, and its halls guide her to the two men she is fated to be with. Brener has loved her from afar since they were children, and Jhennen is a Warrior-Guard, commanding in personality and intimidating in physical presence.

They share a life-changing, passionate night together, but come morning, they must decide if their one-night menage can be the beginning of something new. When trouble threatens to tear Auria away from her life and the two men she is starting to develop feelings for, their connection just might be her only hope for salvation.

Brener’s tongue flicked masterfully on my clit. He knew what he did to me. I held my breath, feeling my insides begin to gather, ready for that final moment.

But just before it came, Brener stopped and jerked back, leaving me alone. My pussy protested, my clit throbbing almost painfully. My eyes flew to him in protest, in supplication, but then my whole being froze.

Brener was sitting back on his heels, his lips wet from his ministrations, his body stiff with shock. The same shock I myself felt, as I stared up at the stranger that seemed to have appeared from nowhere.

He was gigantic, appearing to loom like a mountain from my prone position. Whereas Brener had an athlete’s body, this stranger had a warrior’s body with a broad back and wider hips and his entire physique encased in bulky muscle. Blond hair, almost white, was pulled back in a long ponytail—I could see its bottom reached to his lower back. My eyes flew to his face, his cold, pale blue eyes. He seemed to regard me with some measure of amusement. A long pale scar saved his face from being almost pretty, as did the rough bump in his aquiline nose. Leaning against the green wall of the Labyrinth with one shoulder, his relaxed stance was at complete odds with the tension that gripped me.

I gasped and used my hands to cover my breasts, while drawing my legs up to cover my splayed pussy.

Seeing this, he chuckled and shook his head. “No need to cover all the loveliness,” he said, and his words held a hint of an accent, the difference in inflection conveying he was not from our village. It sounded like a northern dialect.

“Who are you?” I could think of nothing else to say in that moment. My heart jumped to action, pounding away like crazy with a surge of adrenaline.

“Jhennen,” he replied, as though we were out to tea, having a pleasant chat. As an afterthought, he added, “Jhennen Vayment.”

“What are you doing here?” Brener almost growled, coming to his feet now, bristling. With them standing, it was clear Jhennen was a couple heads taller. All the more sweet that Brener thought to protect me from him, dwarfed as he was by this man, who looked battle-trained and used to combat.

“I suppose the same thing as you are,” Jhennen drawled out almost carelessly. His stance was nonthreatening, but his eyes glinted with definite danger. “The Goddess brought me here, same as you. So stand down, and either watch or participate, your choice.”

Outraged, I sputtered, and would have flown at him to slap that presumptuous smile off his face, but remembering my complete nakedness, I stayed put. “What do you mean, participate?”

“Is it the word or the concept you’re not clear on?” He turned to me now, his tone light.

“You’re not participating in anything here, or with anyone here. Feel free to turn about and go back the way you came,” I shot back, angry now.

“I think not. The Goddess doesn’t make mistakes, and to be honest, I hoped we’d cross paths here.”