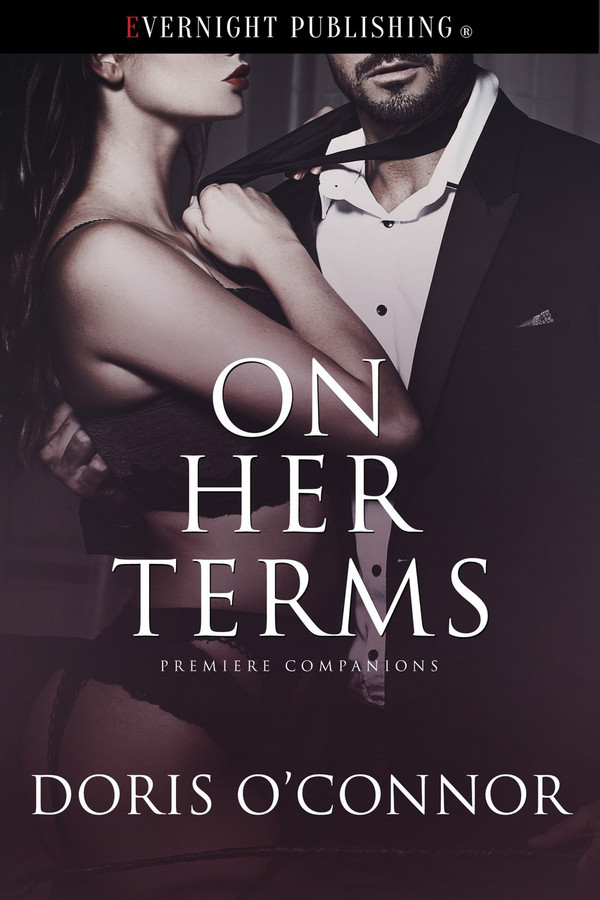 She’ll be no man’s property…

Faced with the prospect of marriage to a man she’s never even met, Nicoletta Cabrizi’s temper gets the better of her. How dare her father use her virginity as a bargaining chip to seal a business deal? A girl’s first time should be special, and who better to give her an unforgettable night than an experienced Dom provided by Premiere Companions?

The reality, however, takes her breath away. The enigmatic Jamie pulls Nicole into a maelstrom of sensation and pleasure, which steals her heart and soul and leaves her doubting her previous decisions.

Jamie is beyond furious at this whole, farcical arrangement, especially when Nicoletta turns out be far from the spoiled princess he was expecting to meet. Her open vulnerability and deep need to submit bring out his protective instincts. Come what may, Nicoletta will be his.

Jamie always enjoyed this process of getting to know what made a woman tick in bed, never more so than when that woman tapped into her submissive streak for the first time. Most needed far more encouragement than his girl had needed. Whether that was simply due to the unusual circumstances they found themselves in or whether she, too, felt the force of their connection, who could say.

From the minute he’d seen her shred the paper napkins, her nervousness pouring off her in waves, she’d thrown his preconceived notions about her out of the window. It wasn’t just the fact that she was ten times more beautiful in person either. Jamie was used to beautiful women, appreciated women in all their forms and guises, but there was something about Nicoletta Cabrizi that had him utterly hooked. Now with her writhing underneath him, her sweet musk in his nostrils and coating his tongue as he licked up the juices spilling past the elastic of the sodden piece of lace barely covering her modesty … now, he stopped analyzing and simply gave himself over to the moment. He knew the moment she was about to explode, because her thighs tightened involuntary around his head, and her hips bucked as she ground her pussy against his face, coming all over it in the process.

The incomprehensible sounds spilling from her mouth made him grin around his mouthful of hugely engorged virgin clit, and Jamie kept up the suckling of that little bundle of nerves, until the last of her aftershocks abated and her thighs went slack. Only then did he sit back and allowed himself to slowly peel her ruined thong away from her moist flesh.

Jamie sucked in a sharp breath as her sweet cunt came into view. Beautifully bare of any hair, it begged to be claimed, and his cock jerked at the thought as her puffed up pussy lips came into view. She jumped when he parted her outer labia with his fingers and ran his fingertips through her inner lips.

“Easy there, my sweet. You’re so fucking wet for me. I can’t wait to claim your virgin hole. All of them for that matter. Will you let me do that, bellissima?”

A groan came from his girl at his words, and her pussy hole quivered and clenched, expelling more of her essence, in which he coated his fingers and brought them right up to her other hole, while he pushed a thumb into her pussy.

A gasp and a tightening of her internal muscles was his answer this time, and when he looked up her body it was beyond satisfying to see the all-over body flush decorating her fair skin. Her unfettered breasts, reddened by his stubble, carried the marks of his teeth, and her nipples stood proudly to attention. Such a glorious, fucking canvas for him to work with.

He swore to himself there and then that he would mark every inch of her skin, so that when she left here in the morning to resume her life as Don Cabrizi’s daughter, she would remember who her Sir was.

Foolish thoughts, perhaps, he had no right to be possessive, after all, but there it was. He wasn’t going to overanalyze this now, just go with his gut and let the chips fall where they may. He’d always known that any dealings with this woman would be dangerous to him, so the urgent need to make her his didn’t really come as a huge surprise to him.

“I asked you a question, my love, I would appreciate an answer.”

Inwardly he grimaced at the endearment he didn’t seem capable of not making. Love had nothing to do with this. It was or should have been a mere business transaction, dammit.

Her halting, panted reply stopped him from pursuing that thought, and he gently thrust his thumb in and out of her pussy, making her groan while he pushed the index finger of his other hand through the tight ring of muscle guarding her ass.

Those muscles flexed around the digit, and when he bent his head to lick across her clit, Nicoletta groaned deep in her throat.

He kept up the gentle licks around and over her clit while he thrust his digits in and out of both her holes. The heavy odor of sex surrounded them. His balls drew tight, and his cock leaked copious amounts of pre-cum, while the wet sounds his fingers made added an auditory stimuli all of their own.

Her words drifted off into incomprehensible moans and sighs, which were music to his ears.

“Oh yes, you can and you will. Come for your Sir, bellissima.”

Nicoletta Cabrizi is fuming. Her father has basically given away her virginity to some stuffy old goat as part of a, wait for it, business deal. But she&#039;s having none of it. Nope. She&#039;s contacted Premiere Companions and she&#039;s taking matters into her own, or rather, his own, hands, in Doris O&#039;Connor&#039;s ON HER TERMS. There are so many aspects to this story that I loved starting with the premise. And the details…the shredding of the napkins is an absolute tell for someone anxious or nervous about something and it&#039;s brilliantly written in the opening scene. And it gets better from there as Nicole quickly gets cold feet only to be glued to the spot when Jamie, her escort, arrives and takes charge. Oh, is now a good time to mention that he&#039;s a Dom and that&#039;s what she asked for? Prepare to be scintillated, to choke on your drink of choice, to swoon, and to cheer on Nicole as Jamie brings her to orgasm over and over and over … yes, and over. Okay the choking on your drink might have been just me, but some of the dialogue was laugh out loud funny. Giggles…there was this one line in particular that well; you&#039;ll want to read the story. If you are a bit skittish about stories with BDSM, this one is on the light side and it&#039;s effectively used in a manner that absolutely ups the hotness level of the love scenes…because that&#039;s what these are. Or at least you will, when you read the story. Go. Go now. Click to buy. - See more at: http://erotic.theromancereviews.com/viewbooksreview.php?bookid=23100#sthash.QOMW3qx0.dpuf

Well, anytime Doris puts out a book, I just have to get it. I love her books and the stories that she weaves. In this one Nicoletta is being married off to a man her father knows for her virginity but she&#039;s having none of that. Instead she hires &quot;Jamie&quot; from Premiere Companions. He&#039;s a Dom and she wants one night of letting go and getting rid of her virginity before her marriage. Jamie thinks he is going to be marrying a stuck up woman and when he finds out who his &quot;client&quot; is, he doesn&#039;t let her know who HE is!! I won&#039;t say anymore about the book because I don&#039;t want to give any spoilers away but this book is over the top HOT and I can&#039;t wait for the next book in this collection!

*Sigh* Or, as a dear writer friend of mine Raven likes to say, Le Sigh. Why am I sighing? Because. That’s what Doris O’Connor’s books make me do. Along with require air conditioning, ice, a new set of panties, possibly my friend BOB, and other unmentionables. On Her Terms is book Two in the Premiere Companions series. (It’s terrible, and I can’t really help it, but I always think of that show Gigalos when reading one of these. I love that show) Nicoletta Cabrizzi, or Nicole, is the daughter of a mafia don. He’s decided to auction off her virginity to the highest bidder and is marrying her off. Now, Nicole isn’t too happy about this turn of events and decides to take back some control of her own by ridding herself of her pesky virginity by hiring an escort. So, in comes Jamie from Premiere Escorts. He’s much older than her, (nineteen years) and he’s a Dominant. (Here’s where all those sighs come in) So will she or won’t she? And does she follow through with her marriage? You’ll have to buy a copy of On Her Terms to find out. I positively loved this book, even if it was a short, though Jamie sounded a lot older than his actual age. He was awfully silver for 42. Must have been premature? Anywho, still an amazing read as always from Doris. I received an ARC of this book in exchange for an honest review.

Her Imaginary Lover by Doris O'Connor