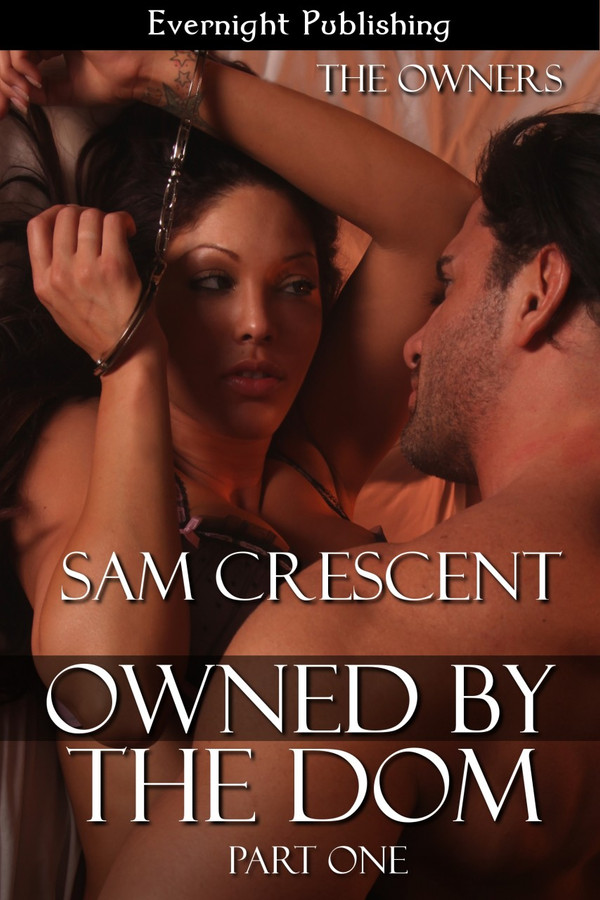 Part One of Two

James Castleden has had enough of the press surrounding him and his club. Ravage is his place to let loose. He is possessive and dominant. When the younger sister of the woman he used to date walks into his club, James is not ready for the instant attraction he feels toward her.

Prudence Star fell in love with James seven years ago. She is no shy virgin and knows what he is. James does not scare her. She’s read the reports about his association with club Possession and she craves what only he can give.

When their flirting deepens, James cannot stop the craving inside him to own, to claim, and to take Prudence as his woman.

But Possession and Ravage are under serious threat. Dominic and Eugene were just the beginning. There is nowhere to hide and no way to keep his woman safe. The Owners have no idea who they’re really dealing with.

How could he fight this?

There was no one else in the world for him. James didn’t want to let her go. She moved his hand down to her left breast. Her full mound filled his palm. She was just the right size for him. Prudence took his other hand and placed his palm between her legs.

“I’m not going anywhere, Sir. I want you and will do anything to be owned by you,” she said.

Her words were not lost on him.

He removed his palm from between her thighs to sink his fingers into her hair. James brought her close to him as he thumbed her nipple feeling her tighten against him.

“Do you have any idea what those words mean?” he asked.

“I was listening to you, James. I want that, too, and I think you do as well.”

James didn’t argue with her. It was true. The possessiveness that swamped him, the aggression he’d displayed—he’d seen it all in his two friends.

James couldn’t fight it anymore. The longer they were together, the harder it was to deny himself. He hated other men talking to her, and he’d been the one to put her in this position in the first place. Through his own actions, he’d taken her own job away, giving her no choice but to accept what he gave her.

“I want you, James,” she whispered. Her blue eyes darkened with her arousal. The kisses they’d shared over the past few weeks had done nothing except ignite a flame inside them. He sensed it strongly within her as he did himself. James knew he was a fool to have allowed one kiss let alone all the others.

No other woman could tame the monster inside him other than the woman standing before him.

James slammed his lips against hers. There was nothing nice or subtle about taking her. He needed to rid every memory of the men she’d dated before him. Prudence was all his, and he was going to show her what it really meant to be owned by a dominant man.

“There is no backing out, Prudence. I take you now, and you’re mine. No one gets to touch what is mine.”

She cupped his cheek. Her fingers stroked his skin. “I’ve always been yours, James.”

Her words unleashed the monster within him. He pushed her back until she was pressed against the wall. In the next moment her blouse was torn from her body. The buttons sprayed around the room. He worked her bra off until her tits spilled out.

A groan escaped him. She was ripe and ready to be fucked. Her pale mounds were tipped with cherry red nipples. They were tight and pointing up at him. He dropped his head to one nipple, taking it into his mouth. Prudence cried out. He covered her mouth with his palm, pulling away from her.

“Be quiet. We don’t want anyone running in here wondering what I’m doing to you.”

Her gaze flashed to the door then down at him. James went to remove his hand. She placed her hand over his not allowing him to let go.

James smiled. “Don’t make a sound.” He went back to tonguing her nipple. James knew that no one would dare enter his office without his permission. They were both safe inside his four walls. He saw the arousal intensify in her gaze. She was turned on by the possibility of being caught.

He ran his tongue over her skin and glided the tip of his tongue around her other nipple. With his free hand, he fingered the wet bud he’d left.

His cock pulsed in his pants. The pre-cum leaked out of the tip and into his pants. He knew the first time with Prudence wouldn’t be enough.

Leaving her nipple, he moved down to unbutton her jeans and lower the zipper. He slid the metal zipper down before placing his hand over her mound. Her panties didn’t hide her arousal. She was soaking wet. Her feminine scent teased the air. She smelt amazing.

James let go of the nipple and dropped down before her. Prudence looked down at him as he eased the denim down her legs. Her mouth was uncovered, and he heard her moaning. The sound filled the air around him like the scent of her pussy did.

“You’re soaking wet for me, baby?” he asked.

She licked her lips, gazing down at him.

Pru has always been in love with James. Her sister dated him and she always felt bad because she wanted him for herself. She knows that she shouldn’t but there is just something there between them. James owns Ravage which is a club with a BDSM club underneath. He has always felt something with Pru but knows she is too young and he also went out with her sister and he saw how she reacted when she found out that he was a Dom. I have really been loving this series. I didn’t think that I would be liking James because he just seems to care about his club and that is all. I have to say that after reading this book and getting in deeper with all these men and the women they love and are with and what they do to keep them. I have really become to love them and understand them. There is just so much going on in this series. I really hate to think that these men will lose everything they have if they don’t get to the bottom of what is going on and who all is involved. I am second guessing myself every time with all that is going on. This author sure does know how to get you so caught up and not able to put a book down. I know I will be going crazy to see what happens next. In one way I want to fast forward with all the books just to see what happens but if I do that then I won’t get the great story in between. I will miss the love and possessiveness that every man has with their woman. Yes sometimes I think there is no way I would put up with a man being this possessive. After I read all three of these books I get to understand it more. It is just they want their women with them and don’t want any other man around them. They always try to keep them safe and look out for them. This book has really got me going crazy. I want to just get all the books and read them and then never let them go. I am hooked. There is some BDSM in this book but it makes it more interesting and that is something this author is good at. If you love possessive men that really love their women then this is the series for you.

James Castleden is the owner and a Dom at Ravage, his personal haven and BDSM club that has been invaded by the press along with his partners&#039; club, Possession. James has had an attraction to his ex- girlfriend&#039;s younger sister Prudence for 7 years, but has kept his distance. But Prue has had a crush on the possessive Dom and starts showing up at his club. James fights this attraction at first, wanting to protect Prudence as her sister asked. He finally gives in. But a criminal element threatens not only Ravage and Possession, but the owners and their women, especially James and Prudence. This was an incredibly well written story. All of the characters were wonderful. I would love to explore more stories like this. I&#039;d love a James of my very own. The plot line was exciting and I couldn&#039;t put this book down! Owned by the Dom: Part One is a definite keeper! I can&#039;t wait for the next installment!

This book was so totally awesome! The Owners series is really good and this book has all the twists and surprises of the other books, but left me hanging at the end(probably because it was part 1). I can&#039;t wait for the next book!! It was well written and I highly recommend Sam Crescent and this book!!

Owned by Him by Sam Crescent

The Scarred One by Sam Crescent

One Chance by Sam Crescent