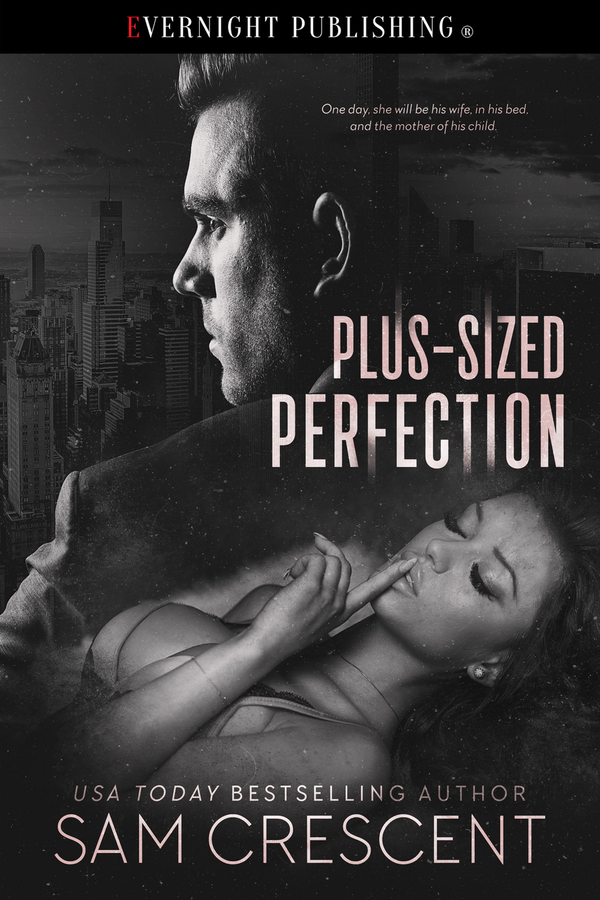 The moment Hunter Reynolds sees Payton Hicks’s ass, he knows he has to have her. He’s partial to a woman with a nice set of thighs and tits, and he makes it his mission to find everything about her.

Being a plus-size model, Payton is used to being ridiculed and turned away. She doesn’t mind, but when she meets Hunter, she’s surprised by how much she wants him. Still, that doesn’t matter. She’s never succumbed to a guy just because he makes her hot. But when an opportunity to model for an exclusive fashion designer comes her way, Payton can’t turn it down, even if the offer is from Hunter’s company.

He loved her ass; now he loves her mind. Payton has gotten under his skin, and the moment he takes her, there is no turning back. Hunter will not risk losing the only woman he has ever loved. As far as he is concerned, Payton is perfect. One day, she’ll be his wife, in his bed, and the mother of his child.

All he has to do is convince her it’s what she wants as well.

Hunter pressed Payton up against the gate, sinking his fingers into her hair, and claiming those perfect lips. Her hand went to his chest, and he expected her to push him away, but she didn’t. Her fingers gripped his shirt tightly, and she released a little moan, giving him the advantage that he needed.

Plundering his tongue into her mouth, he pressed his body against hers, loving how soft she was. She was already driving him crazy, but he knew what he wanted. When some whistles broke through the haze, he pulled back, and stared into her blue eyes.

“I’ve been wanting to do that since the first time I met you.”

Her cheeks were a beautiful shade of pink. “That was some kiss you were saving up.”

“Were you offended by what I want?”

“No. I wasn’t offended. It was nice to meet someone who didn’t take their time, or try to manipulate me.” She leaned her head against the gate, and he still had his hand in her hair. “I don’t do love, Hunter.”

“Good. Neither do I. My work is what is important to me.”

“Then we agree on those things at least.” The smile had his gut twisting. “Also, no sex in the office, and I don’t share.”

He tilted his head to the side, and stroked her cheek. “Are you telling me that you want to fuck me, Payton?”

“I’m giving you my conditions. Do you have any of your own?” she asked. “No sharing, no office sex. Work is work, this is pleasure.” Her hand went to the center of his chest, and began to move down to his stomach, and stopping. “Again, this is all up to you.”

“No sharing, I can do. There’s no woman in my life, and you have to do the same.”

“I can deal with that. I’m trying to find Rick a partner, so it’ll work. Anything else.”

“I don’t want you wearing panties.” This caused her to laugh.

She looked past his shoulder, and around them, and leaned in close so that her lips were right next to his ear. “What makes you think I’m wearing any now?” she said.

Sam Crescent definitely has a way with alpha males and their women and this sexy story showcases that talent. Payton Hicks is a strong successful woman who is at the top of her career. Hunter Reynolds is a powerful man who knows what he wants and in one glance he decides he wants Payton and he&#039;ll do anything to get her. Honestly I want to be Payton when I grow up, not that I aspire to be a model but her strength and confidence is empowering. Her past has sadness and growth and she is by no means one dimensional and that&#039;s what I like about her. I&#039;m a sucker for well written curvy women romance and when the hero has no doubts about his feelings I&#039;m even more smitten. This story made my heart skip a beat and kept my panties damp as well while the characters and situations were smart and savvy. One particular scene had me laughing out loud so hard that I think I scared my housemates. And I&#039;m happy to say that there were more than one of these moments. I want to see Payton&#039;s best friend get his own story as I want to know more about him. I just know that I will be rereading this story over and over again because it was such a feel good one for me. If you like romances that can turn you on and also make you laugh while warming your heart this is a must-read. The Story: Payton Hicks is quickly becoming the it girl of plus-sized modelling and she has no time for anything but her career. But when Hunter Reynolds steps into her life he makes her an offer she just can&#039;t refuse. When they skim the line between business and pleasure will everything blow up?

This book was fantastic! Great writing. All the characters came across as so real and relatable. I loved that Payton was so confident in herself. She was so fun and funny and again, REAL. This book didn&#039;t have any force plot devices to try to add drama. It was just about 2 people who tried to keep it casual but fell, deeply, madly in love. Sounds kinda boring right? But it totally wasn&#039;t b/c Hunter and Payton were so cute and hot, you couldn&#039;t help but root for them. Kudos to Ms. Crescent---this is one of my all time favorite books hour hers. Wow!

Loved it. This book was so good. I just loved the female lead. But more than that the lead male was delicious.

I dont know how Sam does it but she writes amazing books I love her books SL much I recommended her books to all of my friends can&#039;t wait to are what&#039;s next

I Voluntarily reviewed a copy of this book This book was awesome, just what I needed after the previous book I read which was a bit heavy. Hunter started a new clothes line in his business, but for some reason his designer just can&#039;t find the perfect model to do justice to her work. So when he sees Payton, he knew that she would be perfect for this endeavour, but Payton already applied at his company and was told that she didn&#039;t fit in with their Image. Payton decided to become a model after a terrible situation her family went through with her sister. She was proud of the person she was and the women she became, and she didn&#039;t make excuses for anything. She did her thing and that was that. When she meets Hunter she is immediately attracted to him, but she doesn&#039;t have time for relationships so they decide to do the no strings attached relationship. But as with all relationships, feelings get involved and before they know it things become a bit too real for them. This book was awesome, funny, sweet, and the sex scenes between these two were off the charts Smoking Hot! Another awesome book by this author.

It&#039;s always great to see an author writing about the everyday woman&#039;s body. This story for me was perfection. A fairytale relationship of trusting and believing. Very sweet and very sexy.

Plus-Sized Perfection was catchy and inspirational story, teaching that you need to love yourself the way you are and the hell with nasty and short minded people. I liked both, Payton and Hunter. I liked that Payton wasn&#039;t this naive, sweet and innocent little thing. She loved herself and the way she looked, and wasn&#039;t shy about her needs. And Hunter was bossy and possessive. He knew, that he wanted Payton from the first glance of her ass. That man was obsessive with it. Lol

I love these books about a plus size woman. Let&#039;s face it we are not all Cindy Crawford. . This author has a way with words. Words that spins into a Spectacular story that pulls you into the setting. Wow just Wow...

Omg I could not put Plus-Size Perfection down!! It was funny and smoking hot mixed together to give us Hunter and Payton!! Payton blew me away... Payton was freaking hot and I love her confidence in and out of the bedroom!! I loved loved loved the realness you feel with Plus-Size Perfection!! Payton&#039;s sick scene is freaking hilarious and realistic... Freaking awesome!! Hunter is smoking hot and alpha... Yum!! I loved Hunter&#039;s obsession for Payton&#039;s a$$ and possessiveness... Hunter just melts your heart!! I hope we get more books from Sam like Plus-Size Perfection... It was perfect!!

I love this story and all the emotions and feelings that went with it. Payton is a popular plus size model who is truly comfortable in her own skin and it shows. Hunter is the head of a company that uses models. When he finds out finds out she was not hired because of her size, he fires the women in charge and starts his plans of getting her in his bed. Neither of them really planned of falling in love with each other but as time goes by, it becomes obvious. When it&#039;s leaked they are an item by a nosey reporter who used her best friend to get the inside scoop, things change. Her attitude changes and it&#039;s up to Hunter to make her see that he really does love her!! Will it be enough? I have always loved Sam Crescent&#039;s story about &quot;bigger&quot; girls because they make me feel like there is hope for us. Sam writes with feeling and emotion and it shows in her writings! She is an auto buy for me everytime.