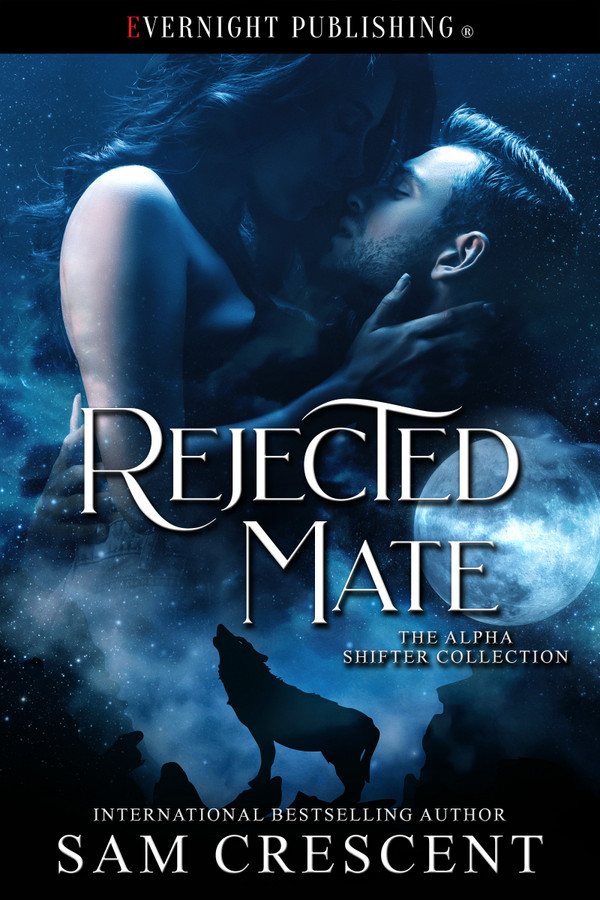 After going through her first transition, Constance finds her mate—who publicly rejects her. The pack wants her to leave, but Gage, the alpha, tells her to stay. His son may have rejected her, but he wants her to stay. At a meeting, Gage declares he will be the unmated male to claim her. She will be his.

All her life, she’s had a crush on the softly spoken alpha, and now he intends to be her mate. Is he doing it out of pity?

He has watched her flourish into a beautiful, curvy wolf, and since his son doesn’t want her, he craves her. He’ll stop at nothing to claim her for his own.

He loves her. He will mate with her.

But he couldn’t have anticipated what would happen when he finally leaves his mark on her.

Will he save her before it is too late?

Pushing those thoughts to the back of her mind, Constance kept her arms wrapped around herself as she stared up toward the main podium.

Gage had entered, and she looked at him, surprised to see his gaze on her.

“Is everyone here?” Gage asked. He looked away, glancing across the main hall. Not everyone was in residence. There was no law to say they had to be here, but anyone missing would get an update at some point. Everyone was a gossip and everyone liked to be up in others’ business.

“As you all know, this is a special meeting tonight. I appreciate you all coming out on such short notice.”

She noticed his hand grabbing the edge of the podium.

Gage was a tall man, and he towered over most of the pack, well over six feet. He had short, black hair and intense blue eyes. She’d seen his wolf a few times when she’d gone camping out in the woods in an attempt to turn herself. He’d been walking by. She didn’t know if he knew she was there, or if he was just enjoying a night’s stroll. Either way, she’d taken her time to watch him, to admire him.

“Earlier this week, one of our own, Constance Button, had her first turning, and during that time, she found her mate. My son, Tanner.”

She stared at her hands.

No one said a word.

This was what Gage was good at, commanding authority. Taking the attention away.

“Tanner rejected her. This was not a spur-of-the-moment decision. I have taken the necessary three days, and before our meeting tonight, he has said he will not have her as his mate. Now, I’m aware that this has caused some … confusion amongst you. I am saddened by your rejection of Connie during this time.”

She lifted her head. No one called her Connie. Gage wasn’t looking at her.

“I’ve heard her position at the library has been removed, even though we all know that place runs smoothly when she’s there. Her parents have kicked her out, again, at a time when a first-time wolf is most vulnerable.”

Glancing across the town hall, she was surprised to see people actually looked ashamed.

“Due to this … circumstance, I’ve had to consult past town chronicles about my position on how I can help this current situation.” Gage paused and his gaze landed on her.

She couldn’t help her body’s reaction. Even now, her crush remained firmly in place.

“According to the books—” He lifted an old book that had certainly seen better days. Everyone was aware of the chronicles. They were available for anyone to consult, if they wanted to. “A rejected mate is not a common occurrence, but it does happen.” He flicked the book open. “I will read what a previous alpha has stated.” He stopped, took a sip of water, and then read. “A rejected mate is indeed cause for much grief, but there is no cause to expel any party from the pack. We are a pack, a unit, and so, after consulting with many elders in different packs, I have decreed a law.” Gage stopped and glanced up. “If all parties have agreed to the rejection, then there can be no other choice. An unmated male or female of the rejected line can come forward and claim the rejected for themselves.” He snapped the book closed. “You all know I’m not mated.” Gage looked at her. “And I claim Constance Button for myself.”

It has been such a long time since I read a shifter book and felt like seeing what the genre had to offer again. Let me tell you it did not disappoint!

This book is very different from the series. This is the only book where a male wolf (Tanner) actually rejects his fated mate (Constance). Tanner publicly rejects and humiliates Constance. Afterwards, everyone in the pack rejects Constance without realizing of how much Constance contributes to the pack. I&#039;m actually glad Constance didn&#039;t end up with Tanner because he treated her so horribly. Then Gage, who is the alpha and father of Tanner, steps in and claims Constance as his own. He makes everyone realize that Constance is a worthy member of the pack and that he had no plans of kicking her out. Later on, Tanner tries to win Constance back, but she rejects him and admits that she&#039;s been in love with Gage for years. In the end, Constance and Gage gets their happy ending. Buy this book now!

From start to finish this was an amazing story about overcoming the worst circumstances to finding your true other half. Constance was always the outcast, which started with her parents and continued until the pack&#039;s Alpha, Gage stepped in. When Constance transitioned later than most she found out her mate was Gage&#039;s son, Tanner. Tanner was always mean to Constance but he really went over the top when he publicly rejected her causing a change of events that left Constance heart broken. She plans to leave the pack but was stopped by the Alpha. Gage was a very fair and friendly Alpha that genuinely cared about his pack. So when he learns of all that Constance, his Connie, has endured.....well, he made a plan. One that ended with him claiming Connie as his mate. What transpires after is a great story about pain, humiliation, betrayal, forgiveness, but most importantly, love. I love how loyal, loving and devoted Gage was right from the start. Great job, Sam!

I LOVED this book! It was such a great flowing story with interesting characters. This is another winner from Sam! Definitely a MUST READ!

This is a short read but man is it packed with all the feels. Connie has been rejected by Tanner as his mate. He doesn&#039;t seem to like anything about her. It caused her to lose her job, her parents threw her out and she is basically shunned in the pack. Along comes Gage, who happens to be the Alpha of the pack AND Tanner&#039;s father. He&#039;s been watching her since she turned 18 and after reading all the rules and bylaws, decides to claim her as his! Will the rest of the pack accept this? And what happens when Tanner suddenly regrets rejecting Connie? This was such a good story. I loved it so much!

I haven’t ever been disappointed by this author!! She is amazing. Always such a wonderful and gripping story—loved this book so much!!

I simply loved the entire story. Characters are so likeable minus tanner and Tiffany. This is a must read!! Gage is dreamy meet your next book boyfriend.

Worth your time. I was really pumped to see a shifter book we’re she goes for dad . Yayyyy wish there was more like that . Dad and uncle books always make forbidden fruit

Loved this .. Sweet sexy hot .. Being rejected was the best thing that ever happen to her , and its a good thing to since she had always been in love with Gage.. I get he is the alpha but he was stupid a couple a times , taking cookies from Lana ..leaving her alone after mating her , yes his son needed him , but he could have Seen her at some point so she knew what was going g on

The Power of Mates by Sam Crescent

Rejected by the Alpha by Sam Crescent