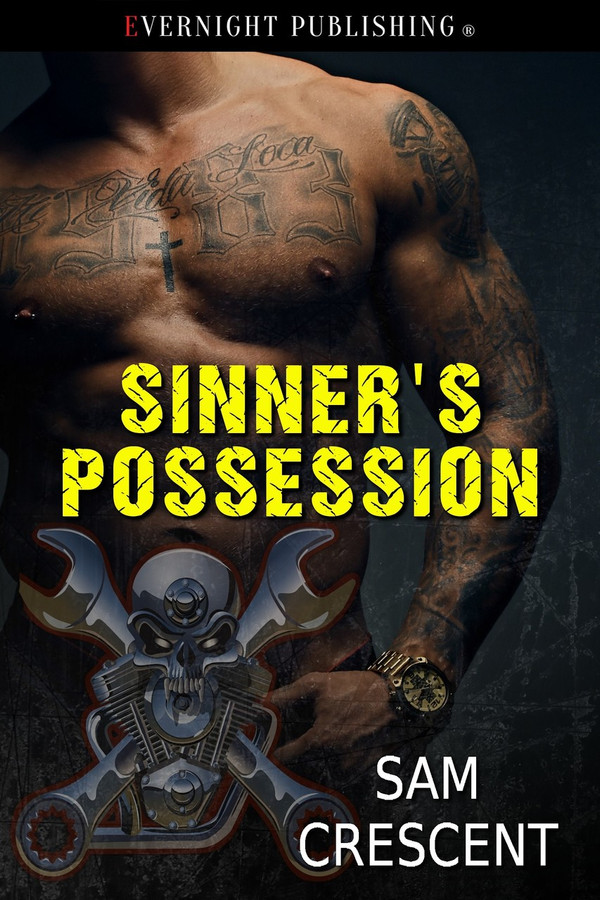 At Master’s hands, Lola went through hell. She was rescued, and she healed her body, but she never healed her mind. Everywhere she goes, Sinner is constantly concerned that something will trigger the darkness inside her. She can’t do that to the man she loves, and right now she can no longer be the woman for him. She has to find the woman that is strong enough to deal with what happened to her, so she can have a future with Sinner.

Sinner can feel Lola pulling away from him, and he doesn’t know what to do. He loves her more than anything, so when Lola tells him she’s going, it takes every ounce of strength he has not to keep her locked up. If he loves her enough, he has to let her go.

Being in Piston County without Lola kills a part of Sinner. He cannot sit around and wait, nor can he go and force her back to him. So, he leaves the club and heads out to the Chaos Bleeds: Nomad Chapter. It’s the only way.

Some relationships don’t follow the same paths. Not everything is easy. Can Lola and Sinner’s love survive the space that her mind clearly needs?

Later that night, Sinner sat a few feet away from the rest of the crew. He had a beer in one hand. One of the guys had actually thought to bring the alcohol. It didn’t matter to him. It was warm, but it was wet. Staring up at the stars, Sinner wondered if Lola had forgotten about him. He smiled, recalling how distracted she used to get.

He was about to give up when his cell phone lit up with her name.

“You don’t have to worry. Did you have a good day?”

“Yeah, I did. Lacey wanted to dye my hair again, but I’ve said I’m going to let the color grow out, and you know, just be me once again.”

He remembered her golden brown locks.

“Sounds good to me. I met up with a few friends, and they’re partying.”

“Did you find yourself a motel?”

“And your friends in the distance? Should I be worried about your safety?”

“They’re allies, babe. You don’t have to worry about me.”

“I thought I may have to call someone to come and find you,” she said.

“I can take care of myself. So, what are you wearing?” He heard some rustling.

“Of course. Lacey’s headed back home, and it’s just me alone in my apartment, and now I’m talking with you.”

His cock thickened. Maybe it was in his head, but he was sure he heard a sultry moan from her.

“Completely naked?” he asked. “No panties, no pajamas?” She used to love teasing him with all the different negligees she used to wear.

“Completely naked. No clothes on at all, Oh, I lie, the blanket is over me.”

He let out a groan. “Tell me if you want this to stop?” he asked.

“I want you to touch your pussy for me.”

Sam Crescent strikes again! Sinner’s Possession is the ninth chapter in the fabulous Chaos Bleeds Series. I’ve read and loved them all but this one is definitely the best book yet. It’s incredibly captivating, emotionally raw, and a page turner all the way. Sam Crescent is one author who never lets me down. This book was complex with a gripping plot and wonderfully rich characters who tugged at my heart. Sinner and Lola were a fantastic main couple who went through a lot of turmoil. Lola had been kept prisoner and raped by the evil Master/Andrew but she still hadn’t fully moved past the horrible experience. She needed to the freedom to face her fears on her own so she left Sinner and her Chaos Bleeds family. Sinner was a really impressive biker hero. He never tried to control the situation. He let Lola go because it was what she needed. He left his club family and rode Nomad with some old friends while waiting for his woman to come back to him. This is where the story got even more intriguing for me because I am really hooked on the series. I remember in the first book that not all of the Chaos Bleeds MC was ready to settle down in Piston County. The Nomad crew were the wilder ones who rode out on their own. Well, now Sam Crescent brings them back in this special book. Let me tell you that these guys are a special breed who really need their own books. Especially Lucius who absolutely tore me up in this story. Sam Crescent left me crying and craving for a next chapter with Lucius. This author is a perfect master at hooking readers with a vivid world, the absolute richest characters and fast moving exciting drama. I did not put this book down for anything, and I already want the next one now.

Loved it!!! Sinner is a very patient and understanding guy for a biker. Few would have waited for Lola to get her act together. I love Chaos Bleeds crew and can&#039;t wait for more please Sam!!

This was Sinner and Lola&#039;s story and it was a very emotional read. Years later Master aka Andrew was dead and the MCs (The Skulls and Chaos Bleeds) had moved on. Lola was not coping well and Andrew&#039;s brutal kidnapping and the acts he committed to her still resided in her head. In some ways, Sinner, the love of her life was making it worst by not giving her breathing room. She decides to go for an interview and lands the job. Did she tell Sinner --- no but he suspected something due to an entry she had placed on her desk calendar. They have an heated argument and she leaves him even though she loved him and he loved her. Months past by and an unforeseen event makes Sinner leave Chaos Bleeds MC and follow the Nomad chapter! He forges a bond with new brothers and discovers the Lucius&#039; best friend, Roxy is dying of breast cancer and he has a promise to keep for both of them... very heart retching!!!!! So in many ways this helps him see that both Lola and himself needed this time apart. What I enjoyed about this series is the subplots throughout the story. Simon and Tabitha&#039;s young long distant romance is so cute and going to be interesting to see with the next generation of the Skulls and Chaos Bleeds MCs will bring about in the next soap opera timeframe for aging kids! Remember in that setting the kids age faster than the adults... lol. Devil and Lexie&#039;s love is still magical and they are having another child, Lacey still can&#039;t cook but still a great friend to everyone; Sally, is stronger after losing her leg and is falling for an older MC member that Whizz won&#039;t like, Nathalie has Slash and Butler pinning and fighting over her and she don&#039;t know what&#039;s going on... the relationships go on and on but they don&#039;t take away from Sinner and Lola&#039;s journey! Really look forward who story will be next ... maybe Nathalie, Butler and Slash will have an untraditional relationship - menage... any things possible with Sam Crescent&#039;s creative writing! LOVED THIS STORY!

I can&#039;t believe I have enjoyed this book so much that I am actually sad I finished it! You rock Sam!

Honestly, not sure how I feel about Lola. I understand that for her wasn&#039;t easy to move on after what she went through, but she made me feel... That&#039;s the problem. I just couldn&#039;t connect with Lola. I couldn&#039;t feel empathy or anything else for her, expect maybe frustration, because I felt that pit between her and Sinner. Maybe Lola wasn&#039;t completely at fault there, but... She was a confused mess. I guess, having devoted overprotective male sometimes is just not enough, when you&#039;re broken and you need to be fixed. And maybe it was one of the problems. Sinner was too protective, making her feel like she&#039;s made of glass. And Lola pushed everything away, instead of dealing with it. Like if she ignore it, it will just go away on its own. So, yeah, I&#039;m unsure about Lola, even at the end. On the brighter note, I so missed Chaos Bleeds. It was nice to meet my old friends. Some even from Skulls. But mostly, I loved to see my man, Devil. I love my man, even more, if that possible. &quot;If you want me to hold your hand, and treat you like a f***ing girl, I&#039;ll do it. I love my men, all of you.&quot; He&#039;s perfect Prez. Always there for his men. He&#039;s perfect man. Always there for his woman. I do hope more of these guys very soon!

Sinner and Lola &#039;s love is so strong and true. They were both there for each other when needed but each could work through their issues on their own. It was so great to catch up with everyone elso, also. Lucia broke my heart and Roxy made me fry. I hope he finds his way back to Piston County in the near future. This book has everything, love,devotion,anger, and a little bit of tears. KEEP &#039;em coming!!

SAM CRESCENT never disappoints. She has gifted us with another wonderful addition to the Chaos Bleeds MC series. Sinner&#039;s Possession is Lola and Sinner&#039;s story, but it is so much more than that. Club members lives were also added. We meet new members. It&#039;s about loss and growing. About leaving the past and moving forward. And let&#039;s not forget making room for the next generation. Outstanding job Sam Crescent !!

Sam Crescent can do no wrong with any of her books!! Sinner and Lola&#039;s story was beyond amazing!! As I read their story I felt as if I was living Sinner and Lola&#039;s pain... That is how outstanding Sam&#039;s writing is!! I always enjoy the glimpse we get to see into the other couples... Its beautiful to see their love still going strong!! I wonder if Im the only one hoping Lucius and Natalie end up together?!? I don&#039;t know how that would work but I think Natalie is just want Lucius needs! All in all another wonderful read by Sam Crescent! I can&#039;t put into words how great of an author she is!! Sinner&#039;s Possession is a must read!

You can never go wrong with a Sam Crescent story, especially the Chaos Bleeds MC. Sinner and Lola&#039;s story was so great! I finished it in a day it flowed so well. I love how even apart their love just kept getting better. Sinner was so sexy and Lola got her self back even stronger than before. I fell in love with Roxy and Lucius as well. Roxy&#039;s story line made me laugh and made me cry. I hope Lucius gets his own wonderful story, he deserves to find &quot;The One&quot; for him. As usual Chaos Bleeds MC guys and gals were a big part of the story and Simon cracked me up through his interactions with his Dad Devil (*swoon*) and the MC guys. I hope Natalie finds her guys or guy...who knows what is in Sam&#039;s mind when she writes about their story. It was great to see the Skulls show up in this book as well, love Whizz, Lacey, Angel and Lash. Cannot wait for the next Skulls / Chaos Bleeds book!

His Possession by Sam Crescent