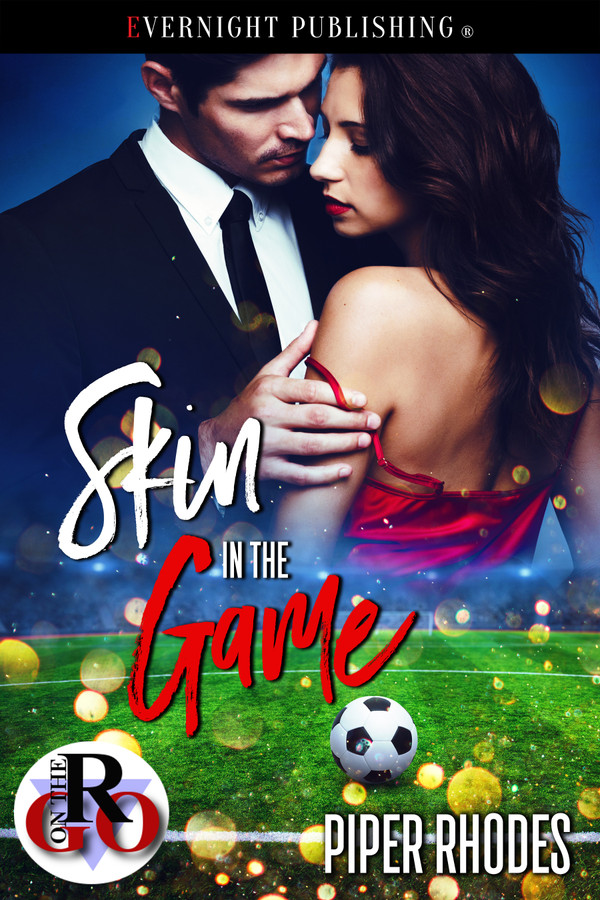 It doesn’t take Julian long to realize he has real feelings for the feisty redhead with the wicked tongue, and he’s willing to do whatever it takes to score her heart. Too bad Josephine knows all about his love ‘em and leave ‘em reputation, and she specializes in defense.

Still, Julian has never been one to give up easily, and this time, he’s playing for keeps.

She was absolutely gorgeous. Wide eyes captured his, set into a delicate heart-shaped face with full, red lips that he could already picture slipping perfectly over his cock. He smirked at her audible gasp.

“Huh?” She stammered, not so subtly sizing him up. He knew he was a good-looking guy, 6’3”, wavy dark hair, deep brown eyes and a great tan from a combination of heritage and plenty of time spent outside. Being a lifelong soccer player meant he was all lean muscle, even under the long-sleeved shirt that he rolled up over his forearms. He dropped one hand into his front pocket, a trick he’d learned pulled the material in just the right way to emphasize his impressive manhood. “I’m sorry, what did you say?”

“I asked if you were lost,” he repeated, more slowly this time. He ambled closer until he stood directly in front of her. Between her natural height and the high-heels, she stood only a few inches shorter than he was, but it was still enough to give him a perfect view down her dress. He had to say, her tits looked just as impressive from this angle as they did from the side. She shifted off the wall so her boobs weren’t quite so front and center, and he did his best to hide his disappointment.

“I’m not lost,” she answered firmly, seeming to regain her composure.

His smile grew as the silence lengthened and it became apparent that she wasn’t going to give him anything else. He made a show of looking up and down the otherwise deserted hallway. “Of course not. I can see now that this is clearly the place to be. VIP area, right?”

“Obviously.” She made a thorough examination of her nail polish. “Only the best of the best super cool party people make it here.”

His eyes sparkled. “Seems like a pretty exclusive club. You gonna kick me out?”

She failed to hide the smile threatening to take over her face. “I’m debating. Consider this a trial membership period while I make up my mind.”

“Fair enough.” He smiled again, quirking his head to the side. He hoped like hell he got past the bouncer to this particular club—he definitely wanted to be inside. Deep, deep inside. “I’m Julian.” He held out his hand.

“Josephine. Jo, if you pass this trial period.” She took his hand, and he felt immediate sparks shooting up his arm and rippling to other parts of his body. Whoa. What is she, made of electricity? Her quick intake of breath let him know that she felt it, too. Off to a good start.

“So, Josephine, soon to be known as Jo,” he winked at her, pouring it on thick. “What made you retreat to this deserted, albeit fabulous, VIP area? Couldn’t take the paparazzi?”

“Well, you know how it is, dah-ling,” she purred. “Can’t even use a porta-john without some paparazzo leaping out of the plumbing, looking for their next cover shot.”

“Too true,” he added solemnly, fighting back laughter. Hot and funny? He didn’t see a ring, but he prayed he hadn’t gotten his hopes up over an unavailable woman. “But surely there’s someone else you wouldn’t mind sharing your club with? A boyfriend, perhaps?” He was obviously fishing, but he didn’t care. With a woman this hot, he had no problem being absolutely shameless.

“Jean-Luc? Oh, you know, he’s busy with the international modeling gig, single-handedly ending war in the Middle East, and developing a cure for space pimples.”

“It’ll be a real problem when we start colonizing other planets,” she assured him matter-of-factly. “And where’s your girlfriend tonight?” she asked, a little too casually.

“People are so busy these days,” she answered without missing a beat.

They stopped speaking for a moment, sizing each other up. Julian didn’t bother to hide his detailed appraisal of every curve of Jo’s body, and the self-conscious warmth flushing her cheeks only aroused him further. He raised an eyebrow and gave an almost imperceptible nod. He liked what he saw, and he wanted her to know it.

She matched him look for look, starting her assessment at ground level and trailing up his long legs, stopping just a moment longer when her gaze landed on his now front-and-center package, before she continued up the V of his stomach and torso and finally arrived back at eye-level. She licked her lips, and his cock strained harder against the fabric keeping them apart. He could read the dirty thoughts written all over her face, and his smile grew as he crept closer to her. He intended to learn every last erotic fantasy, and bring them to life in pulse-pounding detail.

“Now the real question here … is how are we going to busy ourselves?” He was leaning into her now, putting his hands against the wall on either side of her waist. His thumbs just brushed past her sides as he moved his mouth, lingering millimeters away from her ear. “Suggestions?”

She shivered as his warm breath tickled her lobe. “We could … always go back to the party?” The suggestion sounded half-hearted at best, a play at propriety from someone inexperienced in one-night stands and unsure how to proceed. Oh, the things he’d be teaching her tonight…

“I guess we could,” he mused. He still hadn’t moved away from her. “Or we could keep this party exclusive. I kind of like the idea of being in the VIP club.”

“Agreed.” She licked her lips. “Maybe we find a club room that isn’t so … out in the open? Wouldn’t want any non-members gate crashing.”

He leaned in that final inch, making sure she could feel his cock straining against his dress pants and pressing into her stomach. “Best thing I’ve heard all night.” He wrapped his arms around her back, crushing her to him for one brief, searing kiss, and then he took her hand in his and began leading her further into the hallway.

Rock My World by Lee Piper

Rock My Body by Lee Piper