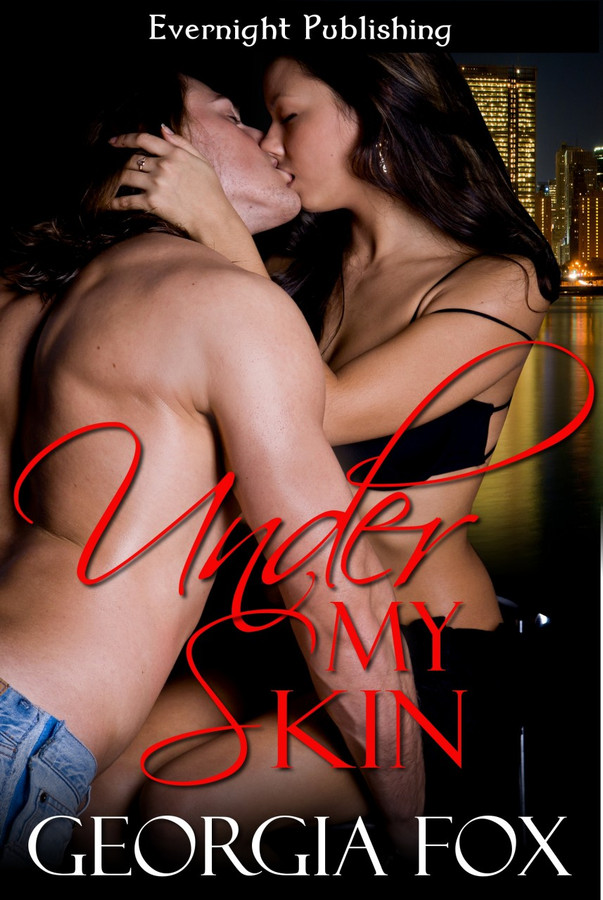 But all that is about to change for Kelly when the mailman delivers to the wrong box and she finds that the sexy new resident in the apartment below is not about to let her reputation as "The Shrew in 4C" stop him from getting to the root of her issues, as well as into her panties. And under her skin.

The door opened and there she stood, one angry-looking brunette, flourishing a baseball bat and wearing a faded, baggy t-shirt that reached just to her thighs. No roller-skates, he noted. But she was definitely doing something on wheels in there. It looked as though she’d been in a struggle of some sort. Her hair was a wild mess and the seam was torn at the shoulder of her t-shirt.
A thin gleam of sweat shone on her face as she scowled at him around the door. “Who the Hell are you? And why are you thumping on my door?”
Her eyes, if he was not mistaken, were purple. Or maybe it was just because they were smoking hot with a fiery rage and...guilt? He’d seen that look before on defendants with something to hide. Usually it was accompanied by a really, really bad alibi.
“Rucchio,” he snapped. “Moved in below you. Would appreciate it if you could decrease the noise level at night and....whatever else it is you do in there. Keep it down.”
The violet color grew stronger as her eyes widened and then she blinked. Was that a flush, or was it simply the heavy heat making her face darken? “Whatever else I do in here? What’s that supposed to mean?” He saw her fingers tighten around the bat and he flinched, but stood his ground.
“I have no idea, Ms. Minton. You could be cutting up a body for all I know.” Definitely serial killer potential. She hardly ever came out of her apartment, as far as he could tell, and no one in the building knew much about her. They didn’t even know how she made her living, or how long she’d been there. He was only surprised she wasn’t wearing a frayed woolly hat and fluffy slippers, and holding a dead cat.
Shadows flickered across her eyes. “You know my name?”
He handed her a pile of mail. “Ms. K. Minton. Apt 4C. Apparently the mailman got lazy and dumped your mail in my box today.”
She hesitated, still eyeing him angrily. Eventually she lowered her baseball bat, stuck it under her other arm and made a grab for the mail. The door opened wider and a wave of heat blew into his face.
“Hot in there,” he nodded toward her apartment. That would explain her state of undress and the sheen on her skin. Her t-shirt was sticking to her curves and two perky nipples stood to attention through the worn cotton.
As she leafed through her mail, he noticed for the first time a slender scar on her forehead, but his gaze quickly drifted back down again to a pair of perfect breasts under that thin drape of cotton. “Air-conditioner broken,” she muttered reluctantly.
“I see.” Trying not to admire her nipples, he wasn’t having much success. “Cooler one floor down,” he stuck a finger under the knot of his tie to loosen it, “in my place.” His gaze trailed a tiny bead of sweat as it trickled down the side of her neck.
“How nice for you,” she snapped, not looking up. “Better go back there and stop banging on my door, disturbing my peace.”
“Disturbing your peace? What about Sinatra blasting at all hours?”
“I’m not blasting anything.” She moved back now, preparing to retreat inside her apartment, but her baseball bat caught on the doorjamb and she fumbled, mail falling from her grasp.
“An interesting selection,” he muttered crisply, watching it tumble to the hall floor. A catalog of sex toys, another featuring rubber wear and one boldly entitled Modern Bondage. Earlier, he’d actually opened a small package before he noted the address on it and although he’d hastily stuffed the contents back the moment he realized the error, he hadn’t re-taped the end of the box. Now, when the package fell between them, a pink dildo in clear plastic casing tumbled out into the hallway.
She bent down and grabbed it, just as he crouched to help.
“I was expecting a package myself, so I opened it without looking,” he explained.
Ms. Minton of 4C shot him a blistering glare that would have given Donald Trump pause for thought before he dared fire her. “It’s research,” she snapped, stuffing the dildo under her chin and retrieving the rest of her mail from his hands and the floor.
“Research?”
She stood abruptly, treating him to a close-up of her long, shapely legs. “Research.”
Her skin smelled of coconut oil and sex. It wafted over him, a hot, spicy cloud of her musk, as she spun around and went back into her apartment. He also caught a flash of blue silk panties and a tight, toned ass under her t-shirt.
One hand on her door, she paused a moment while he scrambled upright, his motion delayed by a sudden, inconvenient arousal. Damn it, this was not what he needed right now. He was off women. Sworn off them, after the last disaster. “Research?” he muttered again, his tongue too thick for his mouth suddenly.
“I’m a writer, Dickwad,” she exclaimed.

Under My Skin is one of those books that will have you thinking WTF one minute and fanning yourself the next. I like Kelly’s attitude, she has been through a serious trauma, and completely deserves to have an attitude. Paul is hotness that I would like to take advantage of too! The ending is the best part of this book, the HEA is sweet, but the very end is what wraps all the “WTF?!” situations up.

Someone was instant messaging Kelly through Facebook, but it wasn’t anyone on her friends list. He could see and hear everything that was going on in her apartment, but she didn’t care or should she? It’s been over a year since Kelly’s fiancé, Will, was gone and she is still having trouble letting go of him. She doesn’t care about much, including cleaning her apartment or stocking her refrigerator. However, having the air conditioning and water going out on a very hot day was just the last straw. She was fuming and decided to take it out on someone, perhaps the negligent superintendent or the annoying downstairs neighbor? Kelly Minton is a writer of erotic stories, living in an apartment building owned by her father. She says what’s on her mind, usually in an abrasive manner, and occasionally including some profanities. She doesn’t have any patience for the usual societal niceties or for anything/anyone who didn’t serve her purposes. Paul Rucchio lives in the apartment right below Kelly’s and inadvertently opened some interesting mail addressed to Kelly because the mail carrier delivered her mail to his box in error. Paul is a lawyer and a nice guy; too nice to refuse requests for favors from anyone, even taciturn Kelly. The plot was clever and worked well because the author skillfully put it together. Kelly didn’t know what hit her, but knew that her life was changing even though she was dragging her feet. Paul was thrust into the middle of Kelly’s life unwillingly, but was drawn in by her need for help. Both of them became stronger for each other and because of each other. At first I really didn’t like Kelly, but as she learned about herself and changed, I understood her more and liked her more. Although Under My Skin was a short story, Ms. Fox had a lot packed into it, weaving in elements of surprise that worked so well that I was a very satisfied reader. I’m still thinking about Kelly, Will, and Paul several days later and re-reading my favorite parts of the story. I highly recommend this steamy short story with a great plot for anyone in need of a quick hot read.

Kelly Minton has a reputation for tormenting the inhabitants and the worthless superintendent of her apartment building. She bangs around and blast Frank Sinatra at all hours. When her new neighbor, Paul Rucchio, gets her mail delivered to him by mistake, he decides to brave her wrath to return it. Sparks fly and tempers clash. Will he be able to tame &quot;The Shrew in 4C&quot;? This was a very cute short story. It is clear from the beginning that there is something other than being a bitch causing Kelly&#039;s bad temper and bad behavior. If I lived in that apartment building, I just may be tempted to kill her. As the reader, I was curious as to what the cause may be. Ms. Fox reveals just enough to keep us interested but not reveal all the surprises. She did a wonderful job of exploring the character of Kelly. At first glance, she is not heroine material, but as usual, there is more than meets the eye. I was hooked right up until the end. The chemistry between the H/H is hot and was illustrated wonderfully. There were some steamy sex scenes, but that is nothing less than I have come to expect from Ms. Fox. It is great when the author writes a hero that you can see yourself with. And Paul is the perfect example of a hero determined not to let her bad behavior put him off. The twist at the end was one I suspected, but was still executed very nicely. This is a great short story to pass the time with enough of a plot to keep you interested!

A little help from a ghostly stalker pushes Kelly into the arms of her new neighbor, Paul. He is too neat to be normal, and too hot for words. But he seems to be just what she needed when she was at her most lonely and vulnerable. Now she has to decide if it is worth it to take a risk with her heart again or if she is better off living in the past. Sultry and sensuous, Under My Skin is a romantic tale about a broken heart trying to survive and unexpected love from the least likely place. Georgia Fox continues to offer seductive stories with unique characters and interesting settings. Her stories are well written and erotically stimulating. I cannot wait for the next one!

Kelly is my kind of heroine, a little bit flawed with a whole lot of attitude. Frank Sinatra brought back memories of “Roger” crooning love songs to me on a hot summer night. Oh, those blue eyes and all the other things that man could do with his tongue… But I digress… Georgia knows how to write a sex scene that will make your ereader sizzle. I especially enjoyed the flinging dildo, the ice cubes, and the anal scene brought back such fond memories of my beloved enjoying the pleasures of my hot little backside. &lt;swoon&gt; There is also a very nice story worked in there amid all the sizzle and spice. Being a spirit guide, I simply adored the ending… Not that I’m gonna give away any spoilers. My only complaint is it took my human way too long to finish this book. I believe it was three times that Jez had to stop reading and give the boy toy an emergency booty text. So, if you happen to be a boy toy waiting for a booty call, this book would make a nice gift for your cougar girl. This story gets my highest praise of 5 swirling snakes. http://witchlitchick.wordpress.com/2012/06/29/