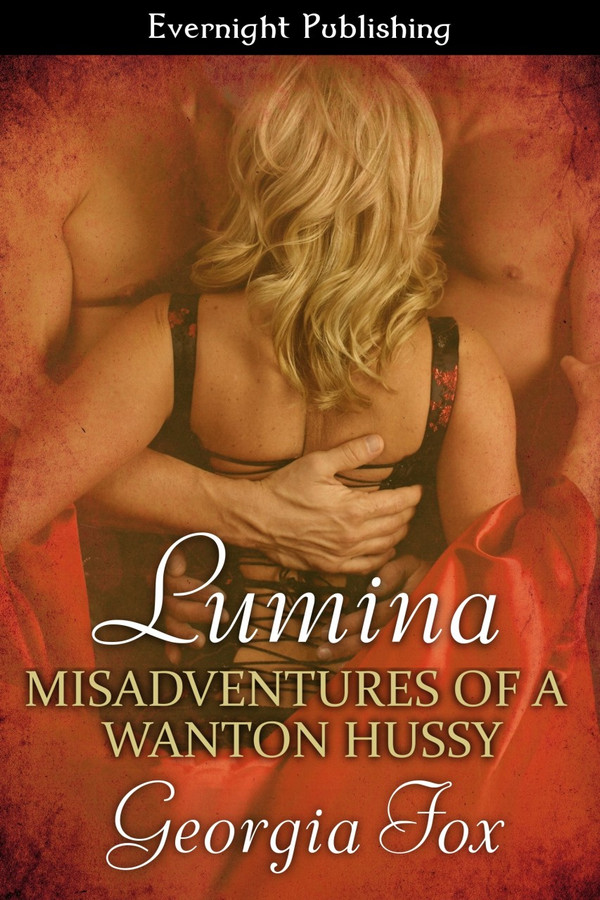 Misadventures of a Wanton Hussy, 1

Isabelle is about to have her virginity auctioned off to the highest bidder. Only stern, sensible Salvatore, her cruel aunt’s solicitor, can rescue her. While he’s been her tutor, she’s fallen deeply in love. But Salvatore has dark secrets that keep him from temptation. Their futures seem destined to be apart.

Her pride wounded by his rejection, and trust broken by a shocking discovery, Isabelle tries to forget him. Determined never to endanger her heart again, she finds another man to satisfy her sexual needs.

Until a surprise inheritance brings her back to Salvatore.

Now named “Lumina”, she wants two things from him – the cock he once denied her. And vengeance.

Salvatore, now a free man, has other ideas. He bitterly regretted losing her before and he’ll do anything to keep her this time, even sharing her with other lovers.

Until she’s ready to commit herself solely to him.

She could barely believe this was happening to her. After all this time of wanting.

“See where she begins to dampen,” she heard him whisper to Etienne. “A man can help this along.”

He bent forward, his head disappearing between her thighs. His fingers parted her labia carefully and his breath tickled her flesh. She gasped as he kissed her down there, very gently at first. His shoulders nudged her legs wider apart and then his tongue lapped over the small opening. “Like this,” he explained to the watching Etienne. “You must make her as wet as possible so that your cock slides in with ease. Especially the first time.”

Salvatore’s head moved and she felt his tongue again sweeping firmly over her sensitive flesh, almost causing her buttocks to lift off the bed. His cool hands were on her inner thighs, stroking. She closed her eyes, hiding the tears of joy as he pressed his mouth to her vulva and flicked his tongue between her nether lips. It was glorious, far better than when she touched herself. Then his tongue went even lower, into the crack of her bottom, licking the tiny puckered hole hidden there, before it swept firmly back up again to her mound. He must have felt her trying to raise herself off the mattress, for his hands tightened, holding her down. Since he would not let her move up and down, she writhed her hips from side to side, her breath shallow and quick.

“What are you doing now?” she heard Etienne demand.

Salvatore gave her another long lick and briefly closed his teeth and lips, gathering and teasing her labia with a firm suck, as if reluctant to stop. He gently blew across her roused flesh and she moaned, trembling, not wanting him to stop either. But he took his mouth off her to answer her husband, his voice gruff. “This is oral stimulation of the woman by the man. It helps produce the softening and moisture to ready your wife for penetration. It also increases her pleasure.”

His mouth returned instantly to its work and she arched, stretching. Little tremors flowed upward from that tiny spot he massaged with his tongue. She knew he was getting into the lesson himself when she felt the bed move and heard him removing more of his clothing, even while he kept his mouth on her trembling slit.

She turned her head, opened her eyes and saw his breeches and shoes discarded to the floor. He was going to use his cock. The mere thought increased the flow of juice between her thighs so that she was almost ashamed of it. Salvatore would know how much she wanted him, yet she could not see the state of his arousal, couldn’t see the effect she had on him.

Isabelle needn’t have worried about what she might miss, for her husband was there to give a loud narrative of every move the tutor made. Moving closer to the bed, as Salvatore’s tongue pressed deeper inside her cunt, Etienne observed aloud in a casual, drunken tone, “It stimulates you too, monsieur. Your cock is aroused and hard as marble.”

She groaned, bending her legs, pressing the soles of her feet down on the bed to push herself into his mouth, wanting more than his tongue. Much more.

“My God, monsieur, your cock is magnificent.”

Isabelle opened her eyes, longing to see this organ that caused Etienne such amazement that he blurted it out, but Salvatore’s tongue had found her nub and now sucked upon it, sending her over the edge into oblivion. Hot waves of desire stroked her vaginal walls. She jerked, lifting her lower body off the bed, crying out, sweat breaking over her skin.

Somewhere in the distance she heard her husband still commenting on Salvatore’s prick and the size of his balls. She realized he was more interested in that than he was in learning how to service his wife. The man between her spread legs lapped up her juice with a greedy appetite, making her even wetter. She’d never seen him feast so contentedly and wildly at her aunt’s table, she thought wryly, a quick giggle bursting out of her. Now he kissed her pubic mound, her belly, her navel, moving up her body until his narrow hips nestled betwixt her thighs and she felt the head of his sturdy cock pushing at her sex, probing slowly through her tingling folds.

Praise be, he was going to fuck her. At last. He pulled her chemise down over her shoulders and then her breasts popped free, so eager they almost hit him on the chin. She squirmed, her breathing labored as his heavy length stretched over her and his white-hot gaze stroked her roused nipples. She heard a small sound, deep in his throat and then he lowered his mouth to her left breast, closing his lips around the areola and tugging on the nipple. His eyes remained open, watching her face as she flushed and mouthed at him to take her. Take her hard and fast. She did not care that Etienne watched.

Salvatore moved his lips to her right breast and back again, playing with those little pink pebbles at their peak, rolling them on his tongue, pretending to bite them, nuzzling his face between them and grunting softly, strange words she didn’t understand.

Meanwhile Etienne stood and moved to the foot of the bed to watch, his eyes afire with lust as he stared at Salvatore’s bared buttocks.

She felt that thick cock head begin to breach her opening, but only a half inch. Her arms around his neck, she kissed him and tasted her musk on his tongue. She slid her legs around his waist, rolling her hips up, wanting him in. Every fine inch.

“Yes, Monsieur,” Etienne urged. “Fuck her. Let me see that big cock do its work.”

This was one hot story and the moment I opened it, I wondered who the woman was and what was going on. The author didn’t make me wait and little by little, with clear, vivid descriptions that sent my pulse racing more than once, she built the fascinating story of Isabelle or Lumina and how she came to be where she was. Isabelle tugged at my heartstrings. We watch how she grows from a naive, playful, chattering girl, to a woman, determined to get what she wants. Like real life, her path is full of hardships and mistakes that will show her life is no easy stroll through the park. I liked Isabelle but, my heart belongs to the male hero of Lumina, Salvatore. Usually, romance novels have a handsome hero. In Lumina this is not the case. Oh, there is definitely an incredibly hot and sexy masculine figure: Alexander Deschamps, also known as The Chevalier. However, Lumina’s love interest lies on the not particularly handsome, Salvatore. The character is built in such an artful way that, to my mind, he was truly beautiful. He was a man of worth; kind and good, deserving, even with his mistakes and errors. Through Ms. Fox’s way with words I felt every moment of fear, yearning and pent up desire of the characters as if it were my own. Oh, how I wished Salvatore was not so proper or Lumina was not so impulsive! But the moments of happiness were also mine to relish. A forbidden kiss! A mirrored room! And one naughty, naughty Salvatore! If you want to read something deliciously hot and naughty, with imperfect characters sure to leave an imprint in your heart, then Lumina is the book for you.

Lia&#039;s Review Lumina, by Georgia Fox, is the story of a woman’s transformation from a naïve little girl to a wanton hussy. Isabelle was ripped away from everything she knew and thrown into a world as different from hers as night from day. While living with her mother and siblings, Isabelle was exposed to a poor country girl’s life of hard work, no fortune, but the belief of true love. But when her wealthy aunt takes her on as her newest ‘project’, Isabelle is now fortunate to live the life of riches, education, and culture. There is only one price; no true love. Her aunt wants to auction off her virginity to the highest bidder. After all, only a man of money could be worth this girl, even if she didn’t love him. Devastated, Isabelle sets out to rebel against her aunt and make her own decisions, and her own mistakes. I instantly liked Isabelle. She was smart and passionate. Behind the naïve girl, there was a strong, brave woman wanting to emerge, and as the story progressed, we saw the transformation in her, as well as the events that led her to it. Salvatore was a flawed hero. I loved his imperfections and hypocrisy, and hated it at the same time. He was a hero who sinned and needed redemption. Although he redeemed himself in this readers eyes. The story as a whole flowed wonderfully, with the words painting vivid pictures. There were no dragging moments, no dullness. I was pulled in from page one and not let go until the final page. It was a truly great read and I would highly recommend this to anyone who likes a good story along with hot sex. 5 Tea Cups!

Lumina/Isabella was a diamond in the rough and she ruled with bigger balls then the men she slept with. I really loved this character which is why Lumina has a good 3 star rating. She was a refreshing twist on a historical woman. The sex is also hot and creative. Although Salvatore never recovered his good name in my eyes, Lumina was worth reading this. This book was pleasant but I suggest you read Ms. Fox’s other books, they are fabulous!