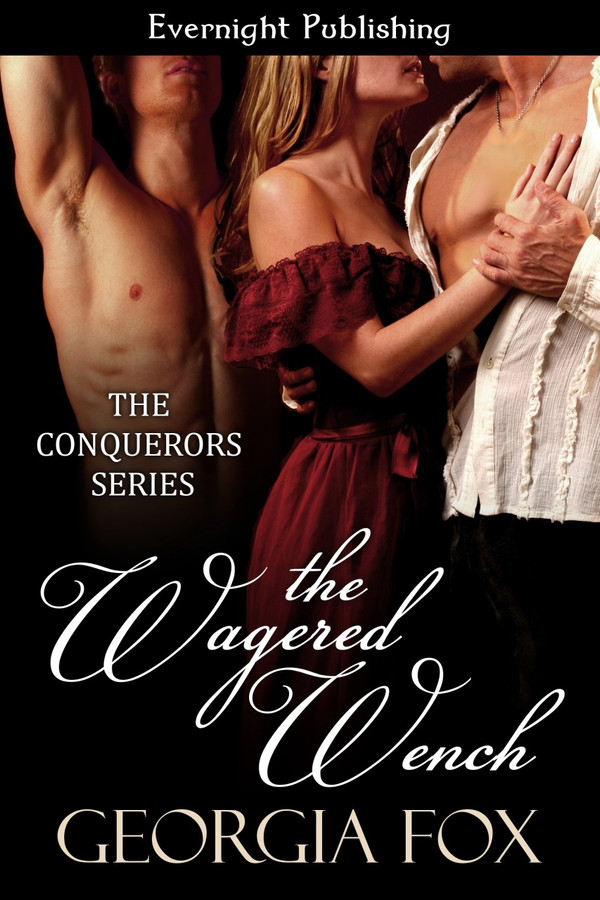 As her father's only child, Elsinora must take a husband to help her run the manor of Lyndower. Although capable of managing the place herself, no one trusts a woman to lead. She can be a wife and mother, nothing more. But she's determined to choose the man for herself and she has just the one in mind—handsome, clever, chivalrous and kind-hearted.

She hasn't met him yet, but he's out there. Somewhere.

However, when her father returns home drunk one evening after a game of tavern dice, Elsinora soon discovers that sobering him up is not her only problem this time. The scarred Norman beast with the crude manners and insulting tongue—the one who brought her father home slung over the rump of his horse, has won not only the manor of Lyndower as his prize after a night of gambling. He's also won Elsinora.

The wench's haughty pride was not in evidence at this moment. He almost wished it was and then he wouldn't feel so much warmth toward her. It would be better if she stuck her nose in the air and insulted him again.
But surely it was impossible to break a heart twice. He should be safe.
Slowly she pulled up her gown and raised it over her head. Aha! The laces were an excuse. She could get in and out of it without undoing them. Now she wore only her thin shift. The rain had dampened it, made it translucent in places. He could see her pale pink areolas through the cloth as it swayed over her breasts and when his gaze swept lower, he thought he could see a hint of pubic hair—golden like the hair on her head. His cock pulse quickened, but he resisted the urge to touch himself.
She glanced down at the organ twitching and stretching up from his lap. He let her look.
"It's not going to fit," she murmured, eyes widened, reflecting the flames of the candles in the iron stand beside the bed.
"We'll see," he replied, amused. "Let me look at you."
Her saw her shoulders square as she took another, deeper breath, and then she lifted her shift over her head, dropping it to the floor.
Somehow he kept breathing. She was not so skinny as she appeared when clothed. In fact she was quite pleasingly rounded. Could still use a few heartier meals though. Her skin was not so pale as he'd imagined, but lightly tinted, like a peach not yet ripened. He held out his hand again. This time she finally accepted it and he pulled her closer until her knees touched the edge of the bed.
"Climb up here," he said, tapping the mattress beside him.
"Why?"
"So I can see whether you might take all of me."
She frowned, still wary.
He lay back, his head resting on the bolster. "Kneel up on the bed, astride me so I can examine you."
After a moment she did as he suggested, a knee on either side of his waist. Dominic felt his excitement mounting with every breath. She was exquisite, more finely made than any woman he'd ever seen naked. Her breasts were not large, but shapely, crested with delicate pink nipples that looked almost too fragile for his mouth and fingers. At the apex of her thighs, a nest of soft, downy hairs covered her mound.
"Closer," he whispered, beckoning her further up the bed.
She shuffled forward on her knees, inch by inch, straddling his chest. He could see the sweetly blushing lips of her cunny and his seed responded to the sight until his balls grew uncomfortably heavy.  He parted his legs, drawing his knees up. Again he beckoned her further.
"But then I will be..." She was flustered.
"Over my face," he finished for her. "That's where I want you." His voice sounded strange in his own ears. There was a dangerous amount of need in him. He had not realized, until then, how much he was looking forward to his wedding night. He should tell her to close her eyes, he thought, so she did not look down at his scarred face. A shudder of anxiety rendered him powerless suddenly to move or speak again. No wonder she was so reticent now. The poor creature was curious about the act of coupling and clearly had needs of her own, but if she had a choice, she would have chosen any man but him—any man but the scarred, ugly monster in her bed.
Apparently she overcame her doubts enough to move again, resting her knees on the bolster, on either side of his head. Now he looked up at her and exhaled, trying to steady his pulse. He had to take his time or she might bolt.
"Close your eyes," he murmured.
She frowned slightly. "No."
Aha, defiant creature! Feigning bravery now after her initial display of timidity. She stared boldly down at his face, evidently determined not to flinch at his scar. So that was how she wanted it, he mused darkly. How far could he make her go before her squeamishness set in and she recoiled from his touch again?
"Reach down and open yourself so I can see if my cock will fit inside that lovely, tight, little cunt of yours."

Other Books in The Conquerors Series:

As the only heir left at the manor of Lyndower, Elsinora, now nineteen, knew she would one day have to take a husband to produce the next heir. The most persistent was neighbor Stryker Bloodaxe, but Elsinora knew he wanted the land more than her. She had no use for men and wanted to run the manor herself. Then her father lost both his land and his virgin daughter in a drunken game of chance. She was now the bride-to-be of a Norman swine, Dominic Coeur-du-Loup, who conquered the manor without even unsheathing his sword. At least until Bloodaxe returns as his competition for Elsinora. This is another winner for Georgia Fox. Dominic Coeur-du-Loup was the second-in-command to Thierry Bonnenfant in Book Four of The Conquerors series. This time, he’s off on his own adventure and faced with a beautiful, if not exactly cooperating, bride. Can he win her love and loyalty? The writing is superb, sexy, emotional, and well crafted. The characters are likeable, especially Dominic who has some guilty second thoughts about how he won the land and the wife. Ms. Fox has a knack for creating the kind of characters you care about, even in this risqué kind of story. Like the others in the series, The Ever Knight, The Virgin Proxy, The Craftsman, and The Good Sinner’s Naughty Nun, The Wagered Wench (Book Five) shows snips of Saxon lands after the Norman conquest and how the two cultures attempt to blend into one. The wild, sexy version of the time. I’m off to read the last installment, The Barbarian. I can recommend the whole series as the kind you’ll keep and reread.

This is my favorite book in Georgia Fox&#039;s Conquerors series. Dominic is everything a hero should be. Honor and fidelity are very sexy. Elsinora is a strong woman and such a good match for Dominic. She yearns for something but even she isn&#039;t sure what. The storyline is delightful. There&#039;s such passion in all of Dominic and Elsinora&#039;s encounters, not just the sexual ones. And speaking of sex, yet again the author pens scorching and creative scenes. There&#039;s a strong connection between the characters and that includes the menage scenes. Strong dialogue and detailed writing bring this story to life. I thoroughly enjoyed this tale and I hope there are more to come. Elsinora&#039;s father lost her and his estate in a dice game. She couldn&#039;t believe the claims of the Norman oaf who returned her drunken father home. All she&#039;s wanted was her rightful place and now she&#039;d have nothing if she submitted to her father&#039;s plan. Dominic recognized the passionate woman that lay beneath Elsinora&#039;s disdain. He was patient man; he would tame the shrew and claim the woman. But all is not as it seems and there&#039;s a rival for the Lady.

Elsinora is the most beautiful woman Dominic has ever seen. She is so beautiful that he can almost completely overlook the fact that she is a harridan. He should ride out on his horse and never look back, but he cannot leave the delicate woman to fend for herself with such a frail father. It is also a bit unnerving that he had a vision of this very beautiful woman just that morning. Now he must decide – stay and claim her or walk away from his vision for good. Georgia Fox has written four previous books in the Conqueror Series, and each one keeps getting better. This installment is wickedly wanton and heartwarming all in one delicious story. The characters are captivating, the setting is vividly described, the conflict is enough to grab you but not put you off – and wow, do I love the way Elsinora resolves the conflict! The story is fast paced and hard to put down. You need to read this book!