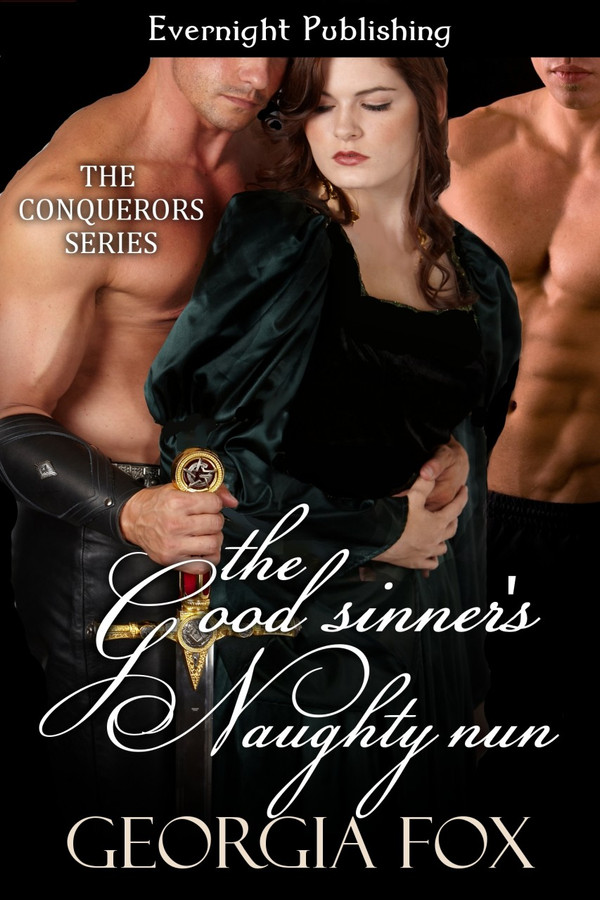 Thierry Bonnenfant has a mission to fulfill - transport a padlocked casket of holy relics across the sea to Normandy. Sounds easy enough, until he finds that his fellow travelers will be none other than a group of ...nuns.

Thierry was hoping for different company, something decidedly less virginal. Now, resolved to a very dull journey, where his only pleasure is arguing with a naughty, quarrelsome nun named Sister Vivienne, he has no warning of the storm ahead.

Vivienne is also on a mission. The priceless vase hidden inside that casket of relics is her pass to freedom. All she has to do is find the key in Bonnenfant's breeches. Apparently he's all brawn and no brains. Seducing him to get that key should be her easiest task ever.

But she's reckoned without this particular sinner's last remaining scruples. And the reckless, bloodthirsty warrior's only fear. Of nuns.

From the stories she'd heard of his sexual exploits, Bonnenfant was a man who would swive anything. The only way to get close to the casket of relics had been to disguise herself as a nun, but she'd fully expected the costume to increase his interest, not hinder it in any way. Surely the corruption of an untouched virgin would be just another challenge to him. But she'd reckoned without the last few remaining morals of Thierry Bonnenfant. A sinner with scruples.

She stooped, retrieved his goblet, carried it to the tray and poured the last of the wine from his jug. Perhaps she needed to get him drunk, like those men by the campfire, and then he'd lose his fear of nuns. He watched her through his fingers; she knew it, felt his heated regard on the back of her head. It was enough to curl a woman's hair. With her gaze lowered demurely, she carried to goblet of wine to him.

After a pause, he took it. "Why did you become a nun?"

She wasn't expecting that. It was rare for a man to take an interest in a woman's reason for anything. "It was chosen for me," she replied.

She thought quickly. "By God, of course."

He gave a low grunt of disgust and sipped his wine, lantern light fluttering over the hard planes of his face. "Mistake."

"If God wished for you to be a nun, why build you that way? You're made to please men with that shape, that hair and those lips..." He raised his eyelids and stared at her over the rim of his goblet. "And all the rest of you."

"You have not seen the rest of me. How do you know?"

He laughed, a sharp, curt sound. "I'm familiar with the female form. A nun's habit is not enough to hide your charms from me."

"Is that why you are aroused." She looked down again at his lap. "Like that?"

"Do you really want to know why I'm rampant, Sister Vivienne? I'm imagining what it would be like to rut you from behind. If you weren't a nun I'd be over you like a wild cur on a bitch in heat."

She knew he meant to shock her into running off, leaving his tent. Wanting her out of there, away from him, but apparently incapable of finding words to command it this time. Or the will to call the guard again, so he tried frightening her instead with this coarse statement. She leaned against the arm of his chair, staring down at his rearing manhood. It must be aching, she thought, her own desire swelling, her pussy contracting. Time for flattery.

"So big," she gasped. "I never knew a man's weapon could be so large."

"You've never used it to harm?"

"Never. Whatever you and your sisters think of men, we are not all beasts who cannot control ourselves."

"Like your men just now, grabbing at me, pawing at me."

"But you just said you'd be over me like a—"

"You wouldn't be fighting me. You'd want it as much as I. Of that, Sister Vivienne," his eyes gleamed wickedly, "I'd make certain."

"Women are not supposed to enjoy the act of procreation. Masculine lust is simply a burden women must bear to provide offspring."

This time his laughter was warm, indulgent. He leaned back in his chair. "Is that what they teach you?" Then he took another gulp of wine and shook his head. "Such a waste of a beautiful woman."

She walked slowly around his chair, ignoring the foolish joy she felt when he said that. "You lust for me because I am a nun. Your lust would fade if I was available to you. An ordinary woman."

"You are a wicked man, easily lured by forbidden fruit."

"You're no better, Sister Vivienne. All that curiosity stifled is not healthy for the blood. And your blood is no different to mine." He glanced over at the flap of his tent where it billowed slightly in a warm evening breeze. "You should leave. Go back, Sister Vivienne and do not venture out again. You might not be so fortunate next time."

She stayed where she was. "Perhaps I would be safer in here. With you."

His eyes flared and then he laughed, shaking his head.

"You said you are not like those men and have never harmed a woman that way."

"Sister Vivienne you try my patience. If you stay here in my tent those wide brown eyes of yours will get an education for which they might not be ready. I don't need to lay a finger on you to get my pleasure."

She looked at his lap, her own sex blossoming with yearning. "Oh?"

"Shall I show you?" He drew the words out so that they touched her intimately somehow, as if he'd stroked her pussy with his lips. "If you don't leave now and go back to your tent, I'll do it in front of you," he warned huskily. "I must release my seed. I can't wait longer. When a man is pushed to this point he has no choice."

Again he was brutally straightforward, trying to scare her into retreat.

It wouldn't work. She sat on his pallet, hands in her lap, watching.

He stared hard at her, his cheeks sucked in. "Very well, Sister Vivienne. Let this be your punishment for straying from your tent again. At least I warned you. Perhaps this will scare you enough to obey my commands in future." He began unlacing his breeches until a long, dark cock protruded from his lap, arched toward his belly, the head bulging and crimson, the veins prominent, filled with blood.

While she watched solemnly, he seized it in his hand.

Other Books in The Conquerors Series:

Thierry and Vivienne were an unlikely couple. This was a nice short story.

Thierry Bonnenfant and his men were charged with safely transporting holy relics from England to Normandy. As they spend their last night in England they discover the relics comes with eight nuns. Thierry was a lover of women, all women, all except nuns. He had little consideration for the intruding Brides of Christ. Sister Vivienne, a very undignified nun, made demands for the comfort of the nuns but her real agenda was stealing the key Thierry held for the priceless treasure hidden with the relics for her master, a wicked Bishop in Normandy. Could she seduce the warrior who had few scruples beyond his fear of nuns? This series just keeps getting better. Each book is sexy and true to the historical time period, the Norman conquests in Saxony. And each installment of The Conquerors tales shows more of the personalities and emotions of the characters than the one before. They are all connected as a minor character in one book will be the main character in the next so you feeling like you already know these people. Vivienne is a sly seductress that has met her match in Thierry. He has his suspicions about what she is but what is he going to do with her? Be sure to check out the previous erotic books in The Conquerors series: The Ever Knight, The Virgin Proxy, and The Craftsman. The ending of The Good Sinner&#039;s Naughty Nun was a total surprise and one of the best I&#039;ve read in a long, long time. The next installment, The Wagered Wench, promises to be just as good.

The Good Sinner’s Naughty Nun is a deliciously wicked story of ‘if only’ and ‘what if’ becoming ‘never ending love’ and ‘dreams come true’. This fourth book in the Conquerors series is the best installment yet. Thierry Bonnenfant married a harridan to save his best friend from having to marry her, and as a reward, he was given a title and lands, neither of which he wanted. He is but a soldier out to do the king’s bidding and spread his loving attentions among the appreciative females of the populace. Vivienne is a captive of her guardian’s schemes and she wishes for nothing more than freedom...until she meets Thierry Bonnenfant. The horrid things she has been forced to endure have not weakened her spirit, and her dreams are now filled with loving and being loved by that most notorious sinner. Ms. Fox has written passion and zeal into her characters, making them high energy and lovable. Twists and turns and unexpected events help these characters find their happily ever after in a book that boasts a tantalizing nun, an irreparable rake, and exhilarating sex. A few minor grammatical errors were noted, but not enough to detract from the heartwarming (even though erotic) love story

I enjoyed seeing the playboy and tough heroine fall in love. Georgia has a brilliant way with words! Another great book in the Conquerors series!!