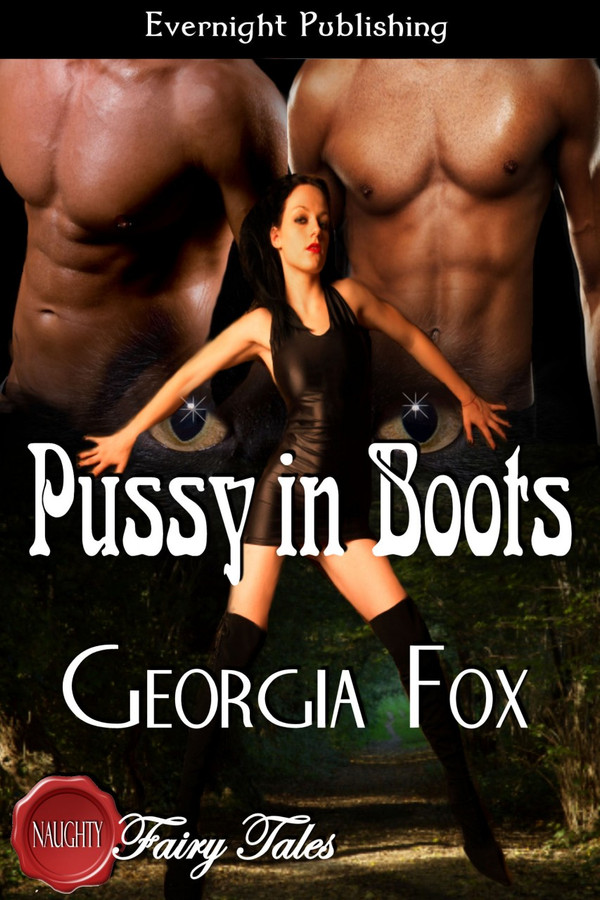 Cate was once a mischievous milkmaid. Now the victim of a witch's spell, she's simply Cat—feline by daylight, female by night. For one who knows how to make the best of a bad situation, it's not just a curse, it's an opportunity. Naughty adventure beckons.

Until she meets a man who makes her yearn for a permanent woman's body again.

Will Cat's heart pay the price for Happily Ever After? Or will Peter find that dreams can come true?

He couldn't believe his luck. The Lady Serena met him ever day by the stream in the forest and, after a few days, even went so far as to allow him a kiss. But she said it could go no further.

"I am to save my maidenhead for marriage," she told him in her soft, lisping voice that made him want to wrap her in fleece and protect her. "My uncle will soon find me a husband and I must remain pure for him on my wedding night."
Peter was frustrated. Good thing he had his dream lover every night on which he could play out the fantasies he was forbidden by Lady Serena.
His midnight bedmate came to him now, each time, as if she was a shy virgin. There was always slight resistance followed by complete submission when she joined him in that wild coupling, their bodies beating together, skin slapping skin, his cock like a battering ram. She knew what he wanted and how he wanted it.
"My naughty lady," he whispered one evening, nuzzling her long straight hair, parting her buttocks with his rigid phallus. "I'm going to rut you hard tonight. Will you take me here?" He prodded her anus.
"Oh no, sir," she purred, back bent, pushing her bottom upward, her hips rocking in his hands. "Don't ask me for that. 'Tis wicked, sir. I cannot."
"But you will," he choked into her soft hair. "You must, I demand it."
"Won't it hurt me, sir?"
"If you resist. Better spread your legs and relax. Then you'll take me into your arse all the way. As I desire." He sat back on his heels to look at his long, thick cock, poised to breach her tiny hole. For the first time ever in these torrid dreams, he opened his eyes. He had to do it.
At first he saw only differing degrees of shadow for there were no candle stumps still lit and the fire gave out nothing more than a soft, flickering glow. But gradually her shape appeared. He saw her shoulder, her round bottom, the curve of her back with a sheen like satin. And her hair as it spilled over her shoulders. It was black as soot and he had not expected that in his dream. Why would his fantasy have dark hair, when Lady Serena was fair?
"But sir you will despoil me," the woman under him murmured, breathless.
"Yes," he grunted, hands holding her cheeks wide apart, his eyes fixed on the winking anus over which he rubbed the wet tip of his manhood. "A million times over I will despoil you. Every part of you, my fine lady. Fuck you and fill you up with my seed, so there is room for none other." His sac throbbed with need to empty already and they'd only just begun their sport.
"I will not be fit for any other man after you."
And the was just the way he wanted it. Surging forward, he began pushing his cock through that tight circle, forcing it open. The woman groaned, her soft cheeks trembling under his palms.
"Oh, sir," she cried. "Oh, master!"
He liked it when she called him that. He withdrew a little and then thrust forward again, felt her body giving way reluctantly to the rude invasion. Reaching under her soft belly, he slid his hand between her thighs. He stroked her moist valley, heard her breathing change, become raspier, quicker. He slid two fingers into her quim and felt her push back, struggling to take more of his shaft. Her walls tightened on his fingers, as his cock began a slow, in and out, each time working its way further, plundering another half inch.
"Oh, master, will you leave no part of me pure and untouched?"
"Never," he grunted, changing his tempo, wanting all the way in now and quickly. "I'll do as I please with you my fine lady. I'll put my cock where I please and you'll deny me nothing."
He thought of Lady Serena, dolling out parts of her body for his kisses - hand, arm, shoulder, cheek —as if they were alms to a beggar. He was deemed not good enough to swive her, not noble enough to go all the way inside that aristocratic little pussy. Angry now, his thrusting became faster, harder. The woman under him screamed and mewled like a wounded tigress—or what he imagined one would sound like.
But her cunt melted, creaming all over his fingers and her bottom pushed into his groin, urging him on. With his free hand he spanked her hard on the right cheek. Then, because it felt good, he did the same to the left. She cursed at him, but her voice was deepened by passion and her bottom opened around his cock, allowing him further inside. His fingers found her hidden nub and diddled it without mercy, forcing her over the edge in a climax that tightened both holes. As she shook and her juices flowed, coating his fingers, he put his other hand to use again, smacking her bottom hard until it glowed hot. Then, when he jerked out of her and emptied his seed, it made a thick white stream across her scarlet, throbbing cheek.
He closed his eyes, fell forward and landed face down on his fleece. The dream had evaporated. The last thing he remembered was the rattling purr of his cat as it nestled beside his head and licked his ear.

How can you not love a heroine like Cat? Cat used to be Cate, until she insulted a witch and was turned into a four-legged animal with an attitude problem. Cat was somewhat selfish, self-centered, and sassy as can be. She was the perfect - or actually, very imperfect - heroine. I love the way she would get distracted and get herself into trouble. While Cat is, well, a cat, she does turn into a human late at night. At first, her life is simple as she sleeps all day and indulges in all her sexual fantasies at night at the hands of Peter, her &quot;owner&quot; (those of you who have even owned cats know that they actually own you, right?), who conveniently thinks he&#039;s dreaming. But when Peter starts to lust for another instead of his phantom dream woman, Cat gets a little (okay, a lot) jealous and starts getting into trouble. And I will leave it at that as I don&#039;t want to spoil anymore of the story, but believe me, it&#039;s so worth reading. The rest of the cast was interesting. The way Ms. Fox described the setting, I could actually visualize it in my head, and at times I felt like I was right there inside the book. I read this story in one sitting. I tried to take breaks but couldn&#039;t. This book refused to be put down. And once I was done, I was a bit sad to say goodbye to Cat. The story ended beautifully. Cat got her happily ever after and all questions were answered, all issues resolved, and I knew there will not be a Cat book two. I kinda wish Ms. Fox would have left some loose ends so that readers could demand (sorry, I meant to say &quot;politely ask for&quot;) a sequel. If you&#039;re a fan of truly hot erotic romance, a great set of characters, an amazing setting, and an entertaining plot, than you CAN&#039;T go wrong with this story. You will not be disappointed and if you pick up this story, I bet you will fall in love with it as much as I did. Now go on, buy it!

Cat was once a milkmaid, until she angered a witch. Now she suffers from a curse. During the day, she is a cat. She&#039;s only allowed into human form at night and her master thinks she&#039;s a figment of his dreams, so she keeps it that way. Peter enjoys his imaginary lover and is happy the way things are. When he meets a woman he thinks to be his real love, will he leave Cat? Can Cat help him win his true love, even if it means losing him? I love this series from Evernight Publishing, Naughty Fairy Tales! These books are a fun take on some of the classics. In this installment, the exploits of Cat are hot and sensuous. She is a very mischievous girl and content with her lot in life. Then Ms. Fox shakes things up with the introduction of new characters. What follows is a super sexy journey into a sexual awakening for Cat. It was definitely hot reading. She is introduced to some sexual foibles that she never imagined and she loves it. The addition of a hot alpha male makes this story just that much more interesting. Once the annoying, simpering female character is out of the picture, a happy ever after is found for all! You should definitely pick up this addition to the Naughty Fairy Tales. I look forward to the future stories.

I&#039;m a great fan of Georgia&#039;s work, so naturally this jumped straight to the top of my reading pile. I read this is one sitting in the bath, turned a bit prune like, but could not put it down :-) A very hot retelling of the classic fairy tale. I adored the heroine, the way she turned the tables on a certain someone, well you have to read it, but left me grinning like the proverbial cat, lol.