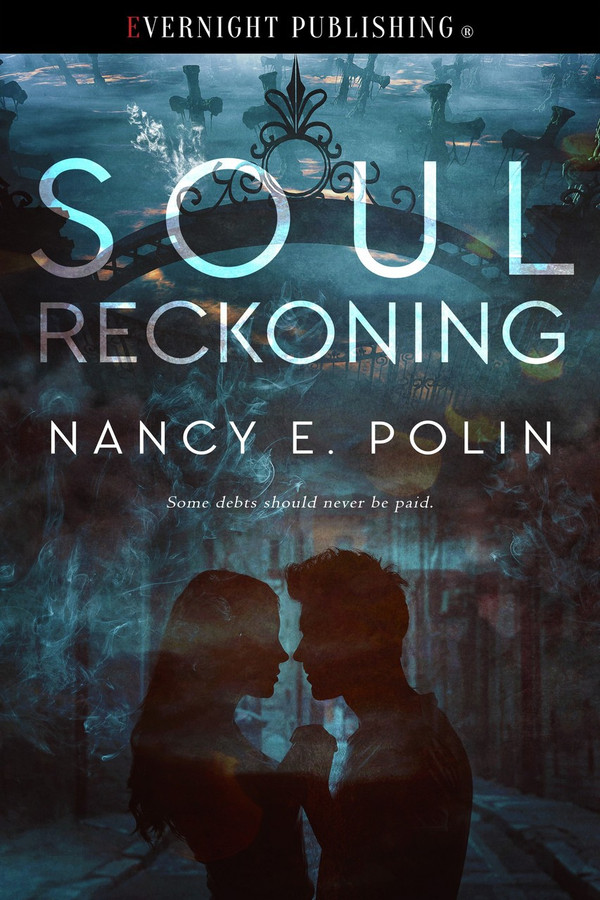 Rowan O’Herley figures the old tavern bequeathed to her by her uncle is a chance at a fresh start. When otherworldly presences begin to make themselves known, she soon realizes she inherited much more than just a 200 year old building.

Luke Meunier holds a tragic past close to his chest. When he sees Rowan O’Herley for the first time, he’s drawn to her but can’t bear the thought of getting close. He’s determined to erect a wall between them, but when he realizes she may be in the very same danger that killed her uncle, he can’t help but get involved.

Rowan wove around a few more people before she was able to pull the heavy door open and slide out the front. Sidestepping to avoid getting smacked at the entry, she leaned near the narrow block wall of glass and tried to rein herself in.

Her heart pounded in her temples, blood rushing heavy and hot. Sweat coated her face and trickled down the small of her back. Night air dropping into the low sixties rushed in, but relief was slow, achingly slow.

“What’s the matter with me?” she murmured, the words not even reaching her through primal senses gone awry. Luke had her twisted around and baffled, and it shouldn’t have even been an issue. The man was rude, aloof, damaged, and couldn’t even stand her. Why did a simple dance throw her into such a tangled mess?

In that moment, she wished she hadn’t come to Louisiana. She should have sold the damned tavern instead of hauling herself almost 2000 miles to deal with an asshole employee and a haunted bar.

The jury was still out on that one. Her logical brain continued to vie for a reasonable explanation, sure it could be found.

Her emotions told her another story, but she endeavored to squash it.

Closing her eyes, she pressed her hand to her forehead, expecting it would be pulsing under her fingertips, relieved when it wasn’t. Tomorrow she would call her parents. Just to check in, hear their voices, even if her mother annoyed her.

Rowan nodded and good manners stifled the urge to tell the Samaritan to go away and be concerned about someone else.

“Sure? You look a little pale.”

She cracked her eyes open, any words lost in a gasp. Jerking backward, she flattened her body against the block glass, inadvertently smacking the back of her head. A spin of dizziness chased a few painful sparkles around her until she blinked it away.

The green-eyed man stood less than three feet from her. He tilted his head and smiled. “Ah, you’re a difficult one, oui?”

“An acquaintance of your uncle’s.” He slid one foot forward and his face filled her vision. “His death was very unfortunate for me, but then voilà! Here you are. It’s important for family to take care of family, do you not think so?”

“I don’t know what the hell you’re talking about.” Rowan kept her voice from shaking and considered it a small victory. Her next victory would be kneeing him in the balls, if at all possible, but her body felt too heavy, too ineffectual. “What do you want from me?”

“I guess this is all very confusing for you, but it doesn’t matter. I’ll make it simple.” He leaned in and she thought she could smell smoke on his breath. “Your uncle owed me. I lost him, so the debt is yours.”

The man opened his mouth and laughed. “Well, that’s unfortunate, but there are other ways to pay a debt—”

She swiveled her head to find Justin popping out the front door, goggling at her, and the man who should have still been in her periphery, gone. Nauseated, Rowan bent from the waist and rested her palms on her knees. “Did you see anyone?” Her voice sounded unfamiliar to her own ears, wispy, weak, strength gone.

And it pissed her off.

His brow crinkled, pink rising from his neck. “Um … well, I think a few people may have left.”

“You didn’t see the guy that was standing here a second ago?” She looked up at him, concentrating on her breathing. Slow and steady.

He opened his mouth and closed it again, befuddled.

“Never mind.” Straightening, she pushed past him on shaky legs and slid back into the throngs of people. The warmth of the tavern settled around her and for the first time, she took comfort from it.

Soul Reckoning, Nancy E. Polin Review from Jeannie Zelos book reviews Genre: sci-fi and fantasy, Romance I really enjoyed Nancy&#039;s collaborative novel After the curtain call, so when she asked if I&#039;d like to review this new book I was keen to read it. Its a very different style, different genre, but the romance is the same tender, realistic type, and the characters feel very genuine. I&#039;ve a weakness for PNR, and for books set in new Orleans, its a perfect setting for the voodoo/houdou type read. With this book I could mentally visualise the characters and settings, and felt very much a part of the story. that&#039;s important to me, I want to feel the danger, the surprise, the closeness of a relationship, not just watch it unfold, but really believe in it. I loved Rowan, she&#039;s a kind and generous soul, and the inheritance comes just at the time when she needs a fresh start. She soon finds out she&#039;s inherited much more than just the tavern though, that it comes at a cost, and there&#039;s no escape. There are some great characters in her new life though, and they rally round to help where they can. Luke is one of them. He worked for her uncle, and lives - in the storeroom, sharing washing facilities with Rowen&#039;s apartment! They don&#039;t hit it off at first sight, Luke is very antagonistic to her. Slowly they get to know each other though, and she discovers his prickly outlook is his way of protecting himself from his past tragedy. Without either of them realising how, they&#039;ve gone from surly comments to becoming lovers, and Luke fears for Rowan. He knows just how eerie New Orleans can be, how the things that go jump in the night aren&#039;t always human, and certainly don&#039;t play by human rules. The closer he gets to her the more he can see the danger and its coming to a head. I loved the way this developed slowly, not just rammed in with an insta-lust relationship, and life threatening dangers from second chapter. Sometimes there&#039;s far more to be gained from stories like this that are paced carefully, let plots develop and the reader work out whats happening, with having to be spoon fed it because there&#039;s been no time to lay clues. That&#039;s the best story for me, whatever the genre, one that flows at its own pace, lets me try to work out what is happening and puzzle over a resolution - not that I ever succeed. That&#039;s why I&#039;m a reader and not a writer. Stars: 5. a fun, standalone paranormal romance, with the spooky voodoo spirits typical of stories in this setting. ARC supplied for review purposes by Netgalley and Publishers

Rowan, a young girl in her 20’s, moves to New Orleans after inheriting The Galloping Goose from her uncle Jimmy. Soon she makes friends and we are introduced to some of the characters: Timothy, Henry, Margie, David, Ruth, Luke and Marcus. Luke is the bartender and longtime employee at The Galloping Goose. He has a mysterious past and becomes found of Rowan. Marcus, the mysterious man who appears to Rowan, has a debt to collect from uncle Jimmy and toys with Rowan while trying to collect it. The book is easy to follow and before you know it, Nancy Polin draws you into the story of mystery and ghosts, Soul Reckoning. I received this story in exchange for an honest review.

Crafting spellbinding tales comes easily to Nancy, and there is no finer example than this tale of Rowan and Luke, along with their misadventures in the Big Easy. Powerful imagery, mystical themes, smoking hot chemistry, and suspense that will have you on the edge of your seat -- this book has it all! This is definitely something I will read again and again!

Soul of the Succubus by Lila Shaw