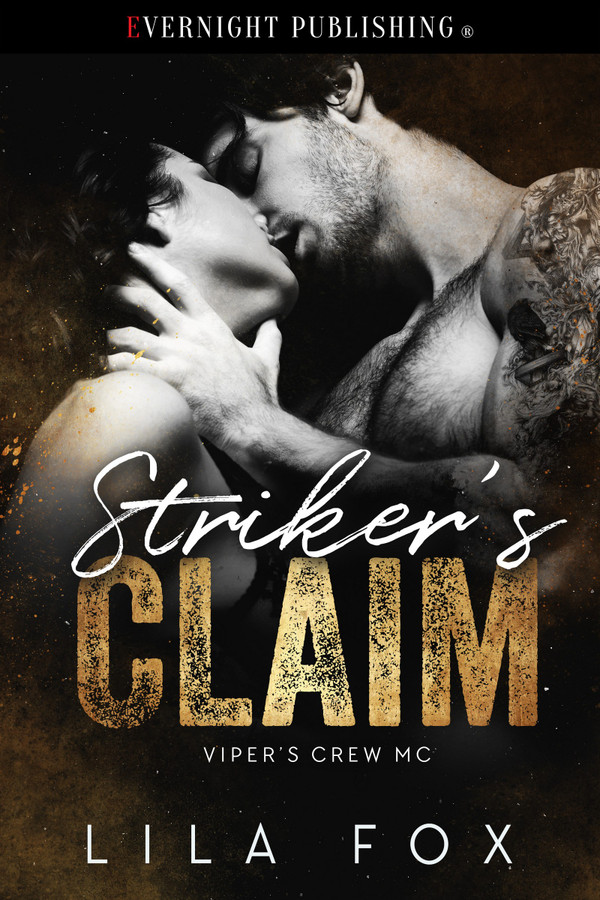 Kristina has been living with her abusive sister for years, and there’s no way out. When her virginity is bargained for, she becomes desperate and finally asks the only friend she has for help.

Striker, the MC Prez of the Vipers, is asked to protect her. He agrees because he’s wanted to claim her since the first time he saw her waitressing at the diner. Now he just has to keep her alive.

Outside influences try to break them apart, and she runs from him. He discovers she’s gone, too far away to reclaim, but he won’t give up until he finds her. While he needs her forgiveness for everything he’s done, he can’t be sure she’ll accept the deaths he’s caused in the name of protecting her. Will she take him back?

He closed and locked the door. “Go shower.”

His teeth snapped together. “You smell like a French fry.”

“What? You don’t like French fries?” she asked and smiled.

He smirked. “Oh, I love them, but are you ready for me to eat you up?”

She giggled. “You can’t do that. You’re not a cannibal.”

He looked up at the ceiling again. Jesus, she was so fucking innocent. “That’s not what I meant. It’s not the type of eating I was talking about.”

Striker knew the exact moment she knew what he was referring to. The smile dropped from her face, and her face turned beet red. He laughed so hard he had tears in his eyes. He couldn’t remember the last time he laughed that hard.

She stuttered and stood. “Oh … I mean, I didn’t realize that’s what you… You don’t really do that, right?”

“With you, I’m thinking fuck, yeah, I will, every chance I get. There’s a lot I’ll teach you, but for now, get into the fucking shower, and I’ll bring you something to wear.”

She still stood frozen, so he walked to her. He had to remind himself everything was new to her.

“So, I’ve never been naked in front of anyone, much less a man, since I was five.”

He pinched the bridge of his nose before he looked down at her again. “Listen to me. You’re going to be naked around me a lot, so you need to get used to it. If this is something you feel you can’t do, I’ll let you hang with the people downstairs.”

“Fuck, no. But I don’t want you in my room if you can’t do the basic thing as getting naked.”

“It’s just… I don’t want you to see my fat thighs and butt.”

Striker sighed. “Babe, I’m going to love everything about you. I’d rather have a woman with curves than one of those stick people downstairs.”

She walked into the bathroom and started to close the door.

He listened to her undress, and then the shower turned on. Fuck, he wanted to tear the shower curtain back so he could see what belonged to him but knew she’d be terrified.

He walked into his closet and found a t-shirt for her. This would be one of the few times she ever went to bed with clothes.

He walked into the bathroom and saw her silhouette in the shower.

“I put the shirt here. I’m going to go grab you a toothbrush.”

“Yes, but your things aren’t here yet. Are you hungry?”

“No, I ate something on my break.”

She was sliding on the t-shirt when he got back. He’d never get that moment out of his head. He hadn’t seen anything but her legs, but they looked sexy as hell. Her hair was in some kind of a messy bun on the top of her head. Several strands got loose, still wet and hanging around her face, but she was the prettiest thing he’d ever seen.

He reached out and tugged on a lock of hair. “I want to see it down.”

She nodded, lifted her hands, and did some twist of her wrist, and before he knew it, an abundance of hair was floating down around her waist.

The first thought in his head was having a grip on it when he was fucking her from behind or when she was on her knees sucking him off. He’d had a hard-on since he saw her earlier, but now it was a raging bit of hard flesh that had him sweating.

“Babe, this is beautiful.”

She looked up at him shyly. “Thank you.”

He grinned. “Here, brush your teeth.”

He walked into the bedroom and wiped a hand down his face. How in the fuck was he going to keep his hands off her? He’d never had to wait for a woman in his life. In most cases, he never even had to speak.

He’d had girls’ attention since he was thirteen years old, and it only got worse the older he got. He knew he was attractive, with thick, dark-brown hair and green eyes. The cleft in his chin seemed to drive them wild for some reason.

She walked out of the bathroom, and he could tell she was nervous as hell. He pulled back the covers.

Kristina slid into the bed and sat against the headboard. He handed her the remote. “Watch TV while I take care of things downstairs. I’ll be up later.”

The last look of her was a tiny person in a mammoth bed. He shut the door and smiled. Striker hoped he’d be able to find her when he got back.

Striker is fascinated by the innocent waitress at the local diner. He might go as far as to say he is obsessed. When he discovers someone has nefarious plans for the beautiful woman, he steps in and changes both of their lives. Kristina notices the biker watching her, but he is a little scary and probably not interested in a girl like her. When she finds herself in danger, she tells a friend who finds her a savior in Striker. Striker and Kristina have no idea the impact their relationship will have on each other and the people around them. The danger Kristina was in comes back and the evil will fracture the relationship between Striker and Kristina. When she runs, Striker is determined to bring her back no matter what it takes, but what if it is too late? Ms. Fox is an excellent writer with the talent to make the characters come off the page. I enjoyed reading about Kristina and Striker; their relationship is unique but entertaining. Kristina was a wonderful character who finds her place where she never thought she would. If you like a good MC story, then give Striker and Kristina a read.

I love this book can’t wait to read more. I hope the next book is about ink and sally there cute