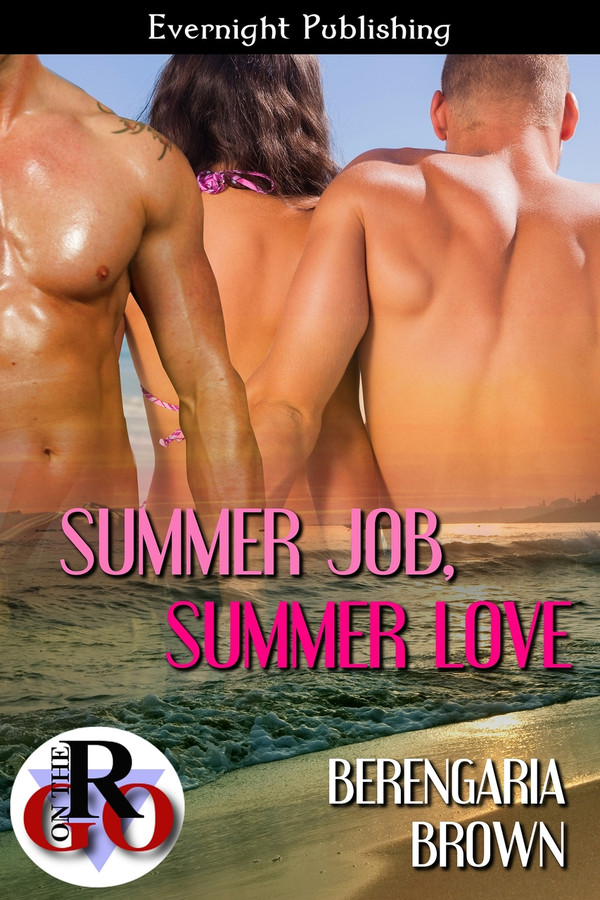 Bronwyn needs a summer job and thinks being a life guard would be fun. In class she’s surprised to find there are twelve men and only three women. She’s even more surprised when Ross and Jake monopolize her attention and want to date her. But this is only a summer romance. It can’t possibly last longer than the ten life guard lessons. Can it?

“I was really hoping you would.”

He took her into his arms, and, as Jake pressed against her back, Ross wrapped his arms around Jake’s shoulders, enclosing her tightly between them. Jake did the same thing with his arms around both their waists.

Ross ground his hot, aching dick into her belly, and she wiggled against him, deliberately arousing him.  Her head tipped back against Jake’s shoulder as she watched Ross’s face.

“Tease.” He whispered the word, then drove his tongue into her mouth. He needed to claim her, possess her, and demonstrate to her she that she belonged to them now. Her hands smoothed up and down along his sides as he fucked her mouth as fast and hard as he could.

Jake let go of Ross’s waist and his hands pushed between Bronwyn’s body and Ross’s until he cupped her breasts, and pinched her nipples.

When they finally pulled apart to draw breath, Bronwyn giggled a little. “I guess that’s a special benefit of kissing a swimmer. They can go a long time before coming up for air.”

She was probably right, but Ross couldn’t think now. “I like that dress, but I’d prefer you naked,” he said.

Jake unzipped her dress and brushed it off her shoulders. Ross bent down and took it as she stepped out of it, laying it on the back of a chair, then he unbuckled her sandals and placed them neatly beside the chair. By the time he got back Jack already had her bra off and was kneeling in front of her sucking her breasts. Bronwyn’s eyes were closed and Ross’s cock was trying to break out of his pants. Quickly, he stripped out of his clothes. Jake lifted his head and turned Bronwyn to face Ross.

Ross stood with his legs apart and pulled her body to him, once again plastering her to every inch of him. Only this time there was only her panties between them, and they were little more than a scrap of green lace and silk. He possessed her mouth once more as he slid both hands inside her panties and flattened his palm against her ass, wanting her to know of his need for her. As he kissed her, he massaged her butt cheeks, letting his thumbs touch her rosette.

He and Jake both hoped she’d agree to double fuck them, but they weren’t confident of it happening on a first date. Hell, they hadn’t even been convinced she’d agree to come back home with them although he’d had a Plan B and even a Plan C to try to convince her to agree.

However, she was busy kissing him back and widened her own stance slightly to let him play with her ass, so there was a definite possibility he and Jake might be able to double fuck her. But he refused to get his hopes up too high. It was a big ask for a woman. Double penetration was the most intense sex and didn’t really say “First Date”.

Once again, Jake stepped behind Bronwyn and began to slide her panties off her hips and down her legs. She had perfect hips, rounded ones that he could hold onto as he fucked her. Not sharp protruding bones as some women had. He liked Bronwyn’s figure. It screamed “woman” to him, someone capable of playing with two men without being too fragile physically to cope with their needs and their love.

He liked Jake’s body, too. Jake was naked now, his cock a long thick flagpole, rising up from its nest of light-brown curls. His torso was all muscle. Sex with a man was much rougher than with a woman. Ross liked both. The freedom to slam as hard as he wanted to into Jake, but also the sweet wet heat of a woman’s cunt. Both. Tonight he planned to have both. As long as Bronwyn agreed.

A summer of fun and hot men is simply perfect to heat up a woman’s life! In need of a summer job to fun her studies Bronwyn takes up a position as a life guard. It’s a fun job and her work colleagues are pretty easy on the eye too. But when Ross and Jake both start paying her attention, lots of attention, exactly what do they want from her? What should she do? Summer Job, Summer Love is a steamy little romance that consists of a couple of big ménage sex scenes and is held together with a viable summer orientated story. Yes, the sex happens quickly into their meeting, and yes, double penetration isn’t for everyone on a first date, but it is for Bronwyn and the story is super hot because of it. It’s nicely written, I liked the quirkiness of the heroine and of course the deliciousness of the two heroes and certainly no details are left out when it comes to the bedroom scenes. It’s not a long involved plot, it won’t pass a lazy, hot, sunny afternoon on the beach, but if you want a little raunchy ménage a trois on your coffee break, you won’t go far wrong with Summer Job, Summer Love.

This would be great to read if you were on a train or taxi ride or even carpool. As long as you don’t blush as the really hot sex scene. I liked Summer Job, Summer Love and I would certainly check out more from this author.

Not Too Tall to Love by Berengaria Brown