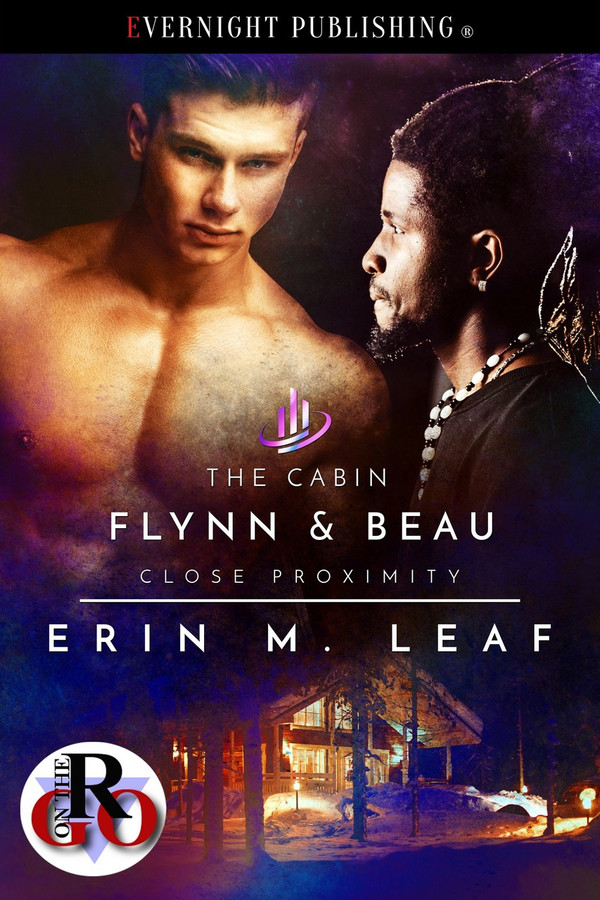 Flynn is having a terrible day—his fiancée jilted him at the altar and now he’s alone on his honeymoon. Going to a wilderness resort by himself was probably not his best idea, but then artist Beau Green arrives to make everything even more complicated. A reservation mistake and stormy weather means the charismatic black man is out of options for the night, but Flynn can’t let someone sleep on a cold floor when there’s a perfectly good sofa in his cabin. When the power dies, Flynn ends up on the sofa, too, because there’s only one fireplace, and freezing is not part of his plan for the day.

Also not planned? Having sex with a dude, but Beau is everything his ex is not—kind, strong, and intelligent. Unfortunately, Flynn is straight, and falling for a man might be one disaster too many for him to handle.

“If the way you’re looking at me is any indication, you seem like you had no idea that you might be the kind of man who leans the other direction,” Beau said softly. “So to speak.”

Flynn stared at him. “I’ve never really thought about it.” He wouldn’t disrespect a guy who had been nothing but kind to him by acting like he didn’t know what Beau was talking about. And it’s not like I can afford to make him angry. We’re stuck in this cabin together. He glanced away. The sleet hadn’t let up. He’d be amazed if there weren’t trees down by morning.

Beau sat up. “I’m not against being your gay experiment.”

Flynn’s gaze flew back to Beau as his mouth went bone dry. “I’m not into pity fucks,” he lied. He so totally did want a pity fuck after this stupid day. His cock wanted a pity fuck. His hands twitched. It took everything he had in him to keep reclining on the sofa like Beau’s suggestion was no big deal.

“Oh, Flynn. It wouldn’t be a pity fuck for me,” Beau said, voice going low and soft. “You’re a fine-looking man.” He reached out and put a finger on Flynn’s arm, then slid it down until he reached his fingertips.

Flynn’s heart banged against his ribs. How could such an innocuous touch feel so damned hot? He licked his lips as he shifted uncomfortably. He wanted that finger on his erection so badly he couldn’t keep still. “I don’t know what to say.” He glanced away. “I don’t want you to get hurt.”

Beau laughed. “Me? I know exactly what I’m doing.”

“I’m on the rebound. That’s what this is,” Flynn said quickly. He could barely recall what Darlene looked like. And he had no memory of what she tasted like, but he bet Beau tasted like sin. And regret.

“I don’t care. I like you.” Beau leaned closer. The intensity of his gaze pinned Flynn to the sofa. He couldn’t move even if he tried. “You a good man, Flynn, but you’re all mixed up. I can help clear some shit up for you.”

Flynn held perfectly still as Beau moved his finger down his hip to his leg, but when the man put his palm flat on his thigh, he couldn’t stop the moan. “Shit. What are you doing to me?”

“I’m not doing a damned thing.” Beau sat back up and lifted his hand away. “Yet.” He pulled the blanket off of Flynn. “You need to tell me yes, or this all stops here.”

Flynn shuddered. He couldn’t think straight anymore. Am I really contemplating this? As if from a long way off, he heard himself speak. “Yes.”

Beau grinned. “Thank fuck.” He stood up and stripped off his shirt. Tiny silver barbells winked out at Flynn from his nipples. His erection poked out his sweatpants.

“Don’t you worry. We’re not going straight for the full monty,” Beau said, clearly amused. He dropped to his knees.

“How do you know what I’m thinking?” Flynn asked him. His voice cracked.

“You’re thinking the same thing every guy who first sets eyes on me thinks.” Beau reached out and pulled Flynn down. “Don’t stress. I know what I’m doing.”

Flynn couldn’t look away from those eyes. “I hope so.”

Instead of responding, Beau kissed him. At the first touch of his lips, Flynn gasped. Beau licked inside, and Flynn realized that he’d never, ever really been kissed before. Oh sure, he’d kissed Darlene, and a couple other girlfriends, but he’d never experienced this … this volcano of arousal. He groaned and slid his hands up to cup Beau’s head. The small dreadlocks under his palms were soft and springy. Beau smiled against his mouth and kissed him again, not holding back.

“Oh, fuck me,” Flynn breathed, when Beau finally let him up for air. He gripped the larger man’s biceps, digging his fingers into muscle. Beau wasn’t like any woman he’d ever touched. He was hard and impossibly overwhelming.

At those words, Flynn tried to inhale and ended up wheezing. “Jesus, Beau. You sure don’t hold back, do you?”

“What would be the point of that?” Beau climbed up and over Flynn, settling his thighs on either side of his hips. “Don’t be afraid.”

How does he know what I’m feeling? Flynn wondered, but then Beau kissed him again and all rational thought fled. Beau kissed the way some people jumped off cliffs: all in, drunk on adrenaline. Or maybe that’s just me. Maybe that’s just what it feels like to kiss this man. To kiss Beau, Flynn mused, hips jerking. His erection met Beau’s considerable weight, and he couldn’t resist screwing his body up harder. “God, what is this?”

“This, my friend, is harmony,” Beau murmured, moving down until his lips were at Flynn’s hip. He knelt up, pulling Flynn’s shirt off with one, smooth motion.

If familiarity breeds contempt then maybe you’d expect proximity to have the same effect – except, as this story proves, that is not necessarily the case. Much like in ‘The Elevator’, the two guys in this story only need a chance to get physically close to understand there is a lot of potential for more between them. Not that they figure it out immediately – but that is what this story is all about. Flynn starts off in a bad place – left at the altar by the woman he thought he wanted to marry, he is ashamed and frustrated and really has no idea where his head is at. When he helps out a fellow traveler who finds himself without a room in a blizzard, Flynn begins a journey that has him discover he is not as straight as he always thought. Beau is gay and not averse to showing Flynn “the other side of the fence”, and even though he falls for Flynn much more quickly than anticipated, he is wise enough to step back and give Flynn the space he needs to figure out what is going on. If you like stories about men who discover their sexuality later in life, if you believe strangers can sometimes be helpful in discovering the truth, and if you’re looking for a quick, hot read about a life-changing situation and its consequences, then you might like this novella.

THE CABIN is the second book in the Close Proximity series, and we meet Flynn who has just been jilted at the altar, and Beau, an artist from LA with a reservation gone wrong. Flynn offers his couch for the night, due to the weather conditions and the mix up, but finds more than he bargained for in Beau. Whilst not as quick as The Elevator, this story is nevertheless a quick one, fast-paced and punchy, just like I would expect from this author. It is well written, with no editing or grammatical errors that disrupted my reading flow. The bulk of the story with Flynn and Beau is set over one night, although there is a time lapse at the end. I am thoroughly enjoying these books, even if the cynical side of me is snorting at the insta-love! Definitely recommended by me.

Goodness me, I’m wearing the biggest grin right now. Such a PERFECT love story. Sparks indeed. When you meet the ‘one’ you just know, and Beau sure knows Flynn is his. Takes Flynn slightly longer to figure this out, and I love the way the author portrayed Flynn’s dawning recognition that he is in fact gay. Add to that his awesome mum and dad, and yeah... Loved, loved, loved this story.

This is the second of Erin&#039;s books I&#039;ve read, and I continue to enjoy her writing style. She crafts a great sentence. I really liked both Flynn and Beau as characters, though I&#039;ll admit to a preference for Beau in his cool, collected awesomeness. The end was a bit insta-lovey for my personal taste, but for all that it&#039;s well-done, and Beau&#039;s appreciation for the roof... well, you should read it and find out. ;)