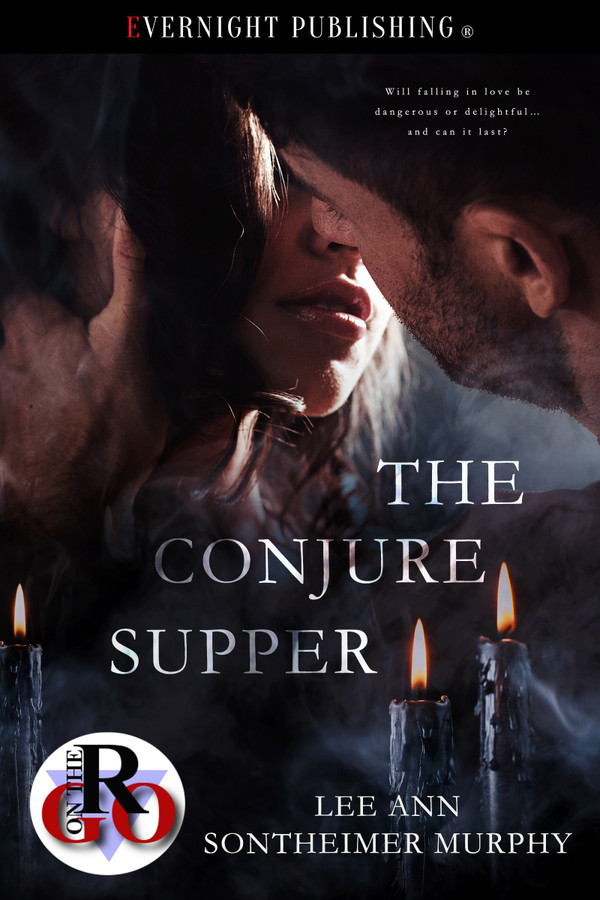 A dozen years ago, three teenage cousins held a conjure supper on Halloween to summon the men they would someday marry. The supper didn’t quite go as planned and the results were not what they expected. Although they seldom spoke about it again, Annie Hatfield, now a professional photographer, is haunted by the supper. The man who joined her at the table haunts her in sexy dreams. When he shows up in the flesh, she’s not sure if he’s man or ghost or demon. Will falling in love be dangerous or delightful ... and can it last?

As Annie walked the grounds, her appreciation for the place increased. When she went inside the church, the sanctuary awed her with an abundance of gold leaf, amazing paintings, including some on the ceiling that were reminiscent of the Sistine Chapel, and a serene atmosphere. Some of the most exquisite stained-glass windows she’d ever seen depicted religious scenes and the massive organ was a work of art. She shot many photos, including some of the hand-carved wooden altar. She now understood why Mia had chosen to return here to be married. It was a unique and beautiful place.

An adjacent parish hall, much newer than the church, was where the reception would be held, she recalled.

Although the church was closed for the day, she lingered longer than she intended, remaining to watch the sunset from St. Mary’s Mountain. It would be worth the drive back to Fort Smith in the dark. A small turnout across from the church offered a view over the small evergreens and hardwoods overlooking the valley below, dotted with small houses, fields, and patches of woodland. In the distance, the higher peaks of the Boston Mountains, the southern end of the Ozarks, stood tall, and in the twilight, they had a bluish cast.

The few clouds in the otherwise clear sky turned a vivid orange, their edges tinged with gold. Annie watched as the sun slipped down toward the horizon. Framed by the mountains, it was a spectacular sight, one of the best sunsets she’d ever watched. She sat, chilled enough she wished she’d brought along a sweater, and savored the beauty in the near perfect moment. Annie preserved the moment with several shots, hoping at least one would capture the glorious colors.

Her solitary contemplation ended when a pickup rolled to a stop a few parking spaces down. If her desire to watch the sunset hadn’t been stronger than her wish to be alone, Annie would have left. She didn’t turn around from her seat on one of the large rocks that bordered the edge of the mountain and pretended she was still alone.

Her hopes that she could enjoy the moment in peace ended when she heard the truck door open then slam shut. Annie listened as footsteps fell on the pavement, moving in her direction. She refused to look up and did her best to pretend she heard nothing.

The voice that spoke her name was deep, and the tone carried a dark sweetness within it, like brown sugar spoken. It held a trace of an accent, one she couldn’t place. Annie didn’t recognize the speaker. It was no one she knew, she thought, and she tensed, wondering how to defend herself if necessary, in this chance encounter.

Her breath stilled, and for the first time, Annie shivered with cold. She summoned up the courage to look at the man who spoke and gasped. She’d seen him just once in reality but in dreams too many times to be mistaken. It was the man who sat beside her at that supper and the man who made love to her as she slept.

“I am.” He looked at the boulder where she sat and gestured with one hand for permission to sit beside her. She nodded.

I must be dreaming, Annie thought, her mind whirling like a merry-go-round at a cheap traveling carnival. Or I’ve fallen off this mountain to my death or I’ve lost my mind. This can’t be happening.

“Who are you?” she asked. “And maybe, more importantly, what are you?”

He laughed, a rich burst of mirth that would have been endearing if she wasn’t so afraid.