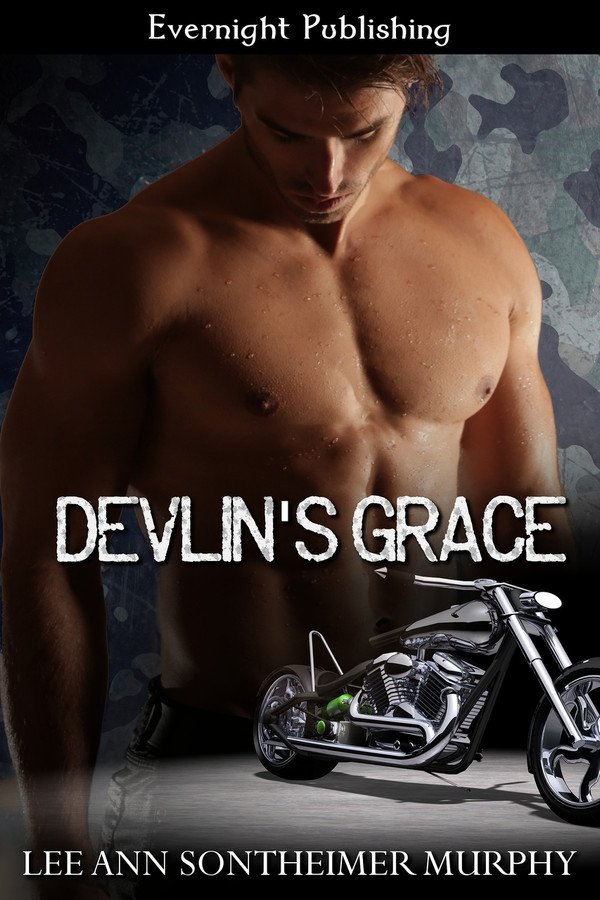 When Iraq war veteran Devlin rides his motorcycle into Gracie’s life, he’s everything she’s not—wild, wicked, and more than a little crazy.  Opposites attract because good girl, college student Gracie wants more of this bad boy.  She invades his personal space, takes liberties no other woman has dared, and although he struggles with PTSD, she sticks by her man.  He teaches her to live a little more and she helps him battle his demons.  If there’s any chance the shattered combat veteran can find his way back, Devlin’s Grace can help him find it.

With a defiant glint in his eyes, he removed his t-shirt. “If you want to see the scars, you can see them all,” Dev said, voice harsh and hoarse.

He revealed a torso dappled with terrible raised welts, both back and belly.  These scars were worse than the others.  Raised red ropes twined like vines over his flesh, fused and almost melted.

The agony Dev must have endured was beyond anything she could imagine. Gracie’s eyes brimmed with tears.  They spilled over, down her cheeks with silent hurt.  One glance at his face, set hard and as stoic as a statue, intensified her empathy.  She laid her right hand on his back, his scarred flesh beneath her touch and with her left she touched the center of his chest.

Beneath her hand his heartbeat thumped, rapid but steady.  His eyes locked with hers and in them Gracie glimpsed flickers of his personal hell.   Confusion showed up, too, along with regret and maybe shame.

Whatever she did or said now would be pivotal, she sensed.  Based on her actions he’d either leave and be gone from her forever, something she didn’t want, or a new beginning would emerge, delicate and fragile.  If she took time to think, she’d be lost, so Gracie mined deep into her woman’s soul.  When words came, she spoke them, her voice soft and yet as constant as the evening stars.  “Oh, Dev, it must’ve hurt so much.”

“I don’t want your pity,” he said, a snarl transforming his face into something wolfish, alien.  “Don’t feel sorry for me, babe.  I don’t need charity, and I sure as hell don’t need you to tell me some dumb ass, feel-good bunch of shit.  So quit crying over me.  Maybe it makes you feel better, but it makes me mad.”

“It isn’t pity,” Gracie said. “I admire you.  It takes a lot of courage to overcome hurts like this.  I hurt for you, but I don’t feel sorry for you.  I hate you had to go through such pain, but I’m crying because I care.”

His hard face softened a little. “Why?”

In this raw moment, she could give him nothing but honesty. “I don’t know, but I do.”

Then Gracie leaned forward and bent just enough to touch her lips to one of the ugliest lesions, the worst of the scars.  He shuddered as she kissed his chest and when she lifted her tear-streaked face, Devlin grasped her arms.  He held her in place and kissed her back, full on the mouth, without remorse or mercy.

Gracie gasped with surprise.  His lips burned hers as if she kissed a devil fresh from the pit, but she liked it.  Her body answered his call, and her arms moved to circle his neck as she gave him back the kiss.

No man had ever kissed her with such thorough savagery or such hungry need.  Shy by nature, Gracie dated young men with quiet demeanors, who were bookish and bashful.  None dared to take her mouth and claim it with potent fire.  Her body charged with wild electricity.  Gracie’s response scared her, but not enough to move away from the flame.

Dev ran his big hands through her hair, gentle and yet insistent, his mouth hooked tight to hers like a bass caught with a spinner and skirt.  At first his motions were a little clumsy, but as he continued, Gracie could tell he knew exactly what he was doing.  Even with her limited experience she knew he kissed well.  Like a child told dessert was out of the question, she craved more regardless of the consequences.  She leaned hard against him, her hips moving against his body in a dance older than time.

Without warning, he pulled away, panting, and stared at her with wide eyes.  Dev outlined her bottom lip with his upturned thumb and shook his head. “I’ll be damned.”

Head cocked, she queried him. “Why?”

“You didn’t run and you liked it.”

Fate seemed to have played a hand at the way that Devlin and Gracie first met. He has not had an easy life and is fighting his demons, but he feels a connection to Gracie at first glance. She seems to feel the same way about him. Can they have a lasting relationship that goes beyond just a sexual encounter or will they both decide that they just can’t risk getting their hearts broken? I enjoyed this contemporary romance story. I liked Gracie even though she was shy and was scared to try new things. Devlin helped her in finding the courage to both try and like doing fun things with him. I liked Devlin too. He was a lonely man who needed someone to accept and love him, hangups and all. I also liked how they nurtured each other. They didn’t let their lust for each other rule them instead they enjoyed spending time together and knowing each other better before they started having sexual relations. I also liked how protective and attentive they were. I thought they were a perfect couple who got lucky to find each other. The love scenes between them are hot. This story contains very explicit love scenes and language.

I found myself in need of a good quick story to read while my car was being serviced. Luckily for me, the geniuses at Evernight Publishing created a wonderful series designed for just this situation. Their Romance on the Go series features very short stories but the authors manage to pack a lot of passion and emotion into those few pages. Seducing Her Boss by Beverly Rae was just the right bite of fun and loving to pass the time enjoyably. Lauren Williams has been fantasizing about her boss Carter Kensington ever since she went to work for him six months ago. Her friend suggests seducing him, but Lauren is afraid that Carter isn’t interested in her. After all, with his good looks, charming personality and millionaire status, Carter could have any woman that he wanted. Combined with her lack of sexual experience, Lauren believed she had no chance. Carter had been secretly lusting after his assistant but was hesitant about approaching her. There was the risk of a lawsuit or that she didn’t return his interest. One night when the two were working late, the sparks began to fly and there was no way either one could resist. Just when it looks like Carter and Lauren have worked everything out, a scandal erupts and threatens their chance at a happy ending. Seducing Her Boss is only 39 pages which doesn’t leave a lot of opportunity for character or story development. Yet Ms. Rae was able to give the reader enough information about Carter and Lauren to provide us with a sufficient understanding of their desires and motivations. I liked both characters and was cheering for them to get together. While the story didn’t provide too many surprises, that didn’t lessen the satisfaction I felt while reading. I’ve become a huge fan of the Romance on the Go series and I have not read a bad one in the bunch. Ms. Rae’s story is a wonderful addition to the series so when you next need a quickie . . . story, then you should grab Seducing Her Boss.

Red in the Hood by Lee Ann Sontheimer Murphy