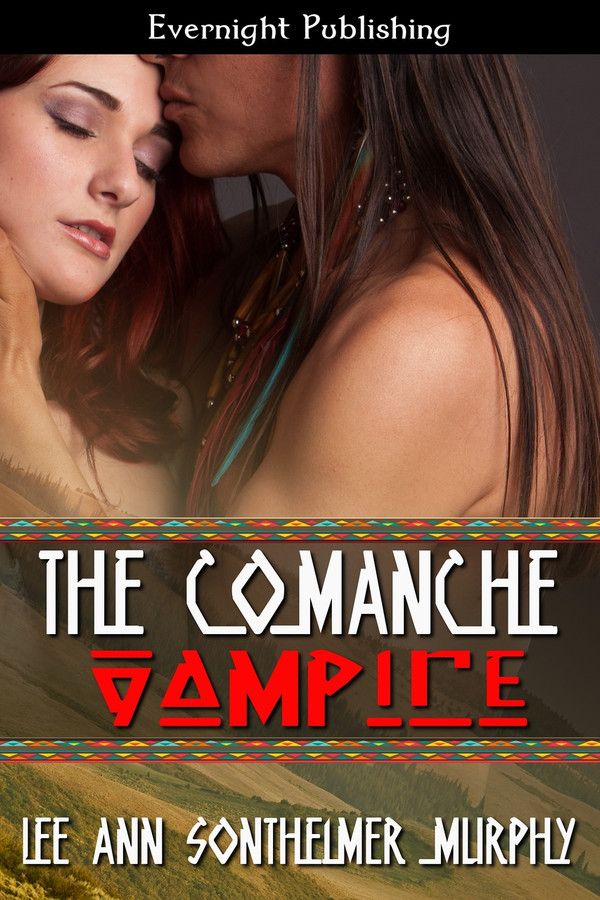 He’s a Comanche. He’s also a vampire. And Ned Big Eagle, also known as Pea’hocso, became one more than a century ago. Just after he surrendered as one of the last wild Comanche warriors to ride the plains, a woman turned him into a blood drinking immortal. Now that he’s become what never existed in Comanche folklore, Ned lives a solitary life on the edge of the Wichita Mountains.

So far, he’s endured his eternal life but when he meets pretty history professor Anne Delahanty, she brings out emotions and desires he hasn’t known since he was still human. As they fall into love, he wants to tell her the truth—but when he does, Anne doesn’t believe him. It takes a near tragedy to convince her and then she can’t deal. Ned has few options but he hopes he can convince her to join him in an everlasting undead love, Comanche style.

Who am I now? What am I now? Ned wondered.  He tried to imagine telling Anne the truth, sharing with her his stark and shocking reality but he failed.  Every possible way he could summon up ended with her scorn, fear, or disbelief.  But, sometime she’d have to know or they couldn’t remain in a relationship or share love.  Part of Ned wanted to wake her and tell her, blunt and without any explanation.  Another side of his soul devised ways to hide and not share the truth.  As he considered the options, he focused with such intensity he failed to hear Anne join him.

“What’s the matter?” she said, in her lilting voice.  Her hand touched his shoulder and he glanced up at her.

Ned took her hand and held it. “Nothing,” he lied. “Sit down with me if you want.”

“You look so strange,” she said as she joined him. “You seem upset and worried.  What is it?”

Her frown line appeared, faint but present. “What do you mean?”

“I’ve done things you couldn’t imagine,” he told her. “I’m nothing like you think.”

In the flickering firelight, she’d never seemed more beautiful.  The flames reflected in her eyes and made them molten.  Anne stared into his face without blinking and her hand tightened against his. “I know enough to love you,” she said. “And whatever else there may be, I know all I need to know. You’re a good man, Ned, with a fine heart.  You love the old ways, but you’re not afraid to live in the present. You bring strength wherever you go and you’re caring, considerate.”

Each word struck his chest like a well-aimed arrow shot from an enemy bow. “Maybe I’m only like that with you or maybe you see me that way because you love me, not because I am.”

Ned said nothing, couldn’t summon up the words because he had no idea how to express his emotions.  And, if he had, he wouldn’t have been up to dredge them up past the thick knot of tears locked within his throat.  Anne’s love moved him and so he put one arm around her.  He held her close and tight, her head on his shoulder.  They sat for a long time, until the moon shifted position and the first light of dawn appeared in the east.

“All I can do is try to be the man you think I am,” Ned said, finally.  “If I can’t and when you figure out I’m not, promise to forgive me.”

Speaking hurt, cut like broken shards of glass in his throat and tightened his chest but he needed to say it.  Anne’s wordless cry eased a fraction of his anguish.  She kissed his face, his cheeks and then his mouth.  “I don’t know what’s bothering you. I can tell you’re hurting over something.  Why don’t you just tell me, Ned? Whatever it is can’t be that terrible, and it’s not going to change how I feel about you. Won’t you just tell me?”

He ought to do it, just say the four words that would destroy his world.  Ned couldn’t bring himself to say ‘I am a vampire’ so he said, “I can’t, Anne.  Not now.”

“Then show me.” Her grin infected him and banished his dark thoughts for now.

His facial muscles stretched as his smile emerged. “I’d like to.  Wanna go back in the lodge?”

“I wouldn’t mind but I was thinking maybe we could go out for breakfast, maybe one of those buffets,” Anne said. She sounded wistful. “And then maybe we could go to the museum on post at Fort Sill.  Then we’d head over to the Museum of the Great Plains in Lawton.  We could make a day of it, running around to see some historic sites, do a little shopping, and have lunch.”

Ned hadn’t set foot on the fort since he left it, but he’d heard some of the original buildings, ones he’d known from his experiences there, were part of the historical complex.  With an abundance of heat and sunshine in the forecast, he didn’t think it would be a good day to run around Lawton with Anne.  Maybe some rainy, gray day in the fall or winter, they could, he thought.  Although he hated to disappoint her, he answered with as much truth as he could.

“I work tonight, Anne,” he told her. “Someday I’d like to do all that, but not today.  How ‘bout we go to my house and spend the day together?”

Her lips twisted into a bow then Anne nodded. “I guess we can.”

“A little, but I’ll manage.” Her slight smile erased any sting and Ned relaxed.  She wasn’t mad, then. He gauged the sky.  In an hour, it’d be full light and he’d rather be inside by then.

Ned Big Eagle has had a few centuries to regret one decision which changed his existence for all time. In all the years he has never been as tempted by a woman until now and Anne. Anne Delahanty is fascinated by Native American culture; so fascinated in fact she became a Native American professor. Meeting Ned Big Eagle was like meeting a historical figure straight from the Old West and she is smitten from the start. Anne knows there is something odd about the man she is coming to love but is unwilling to admit it even when provided evidence. Ned feared telling Anne because his time with her would be over, but he has no idea what to do when he tells her and she goes into complete denial. When faced with reality both will have to decide if there is enough between them to last an eternity or just a lifetime. The Comanche Vampire is a beautiful blend of the past and present. Anne and Ned are each strong characters which provide a beautiful love for the reader to enjoy. The writing of Lee Ann Sontheimer Murphy provides for a smooth story which ends before the reader is ready and leaves the reader wanting more. I highly enjoyed reading a unique paranormal vampire story. - See more at: http://coffeetimeromance.com/BookReviews/thecomanchebampirebyleannsontheimermurphy.html#.VDuxlPnF_z5