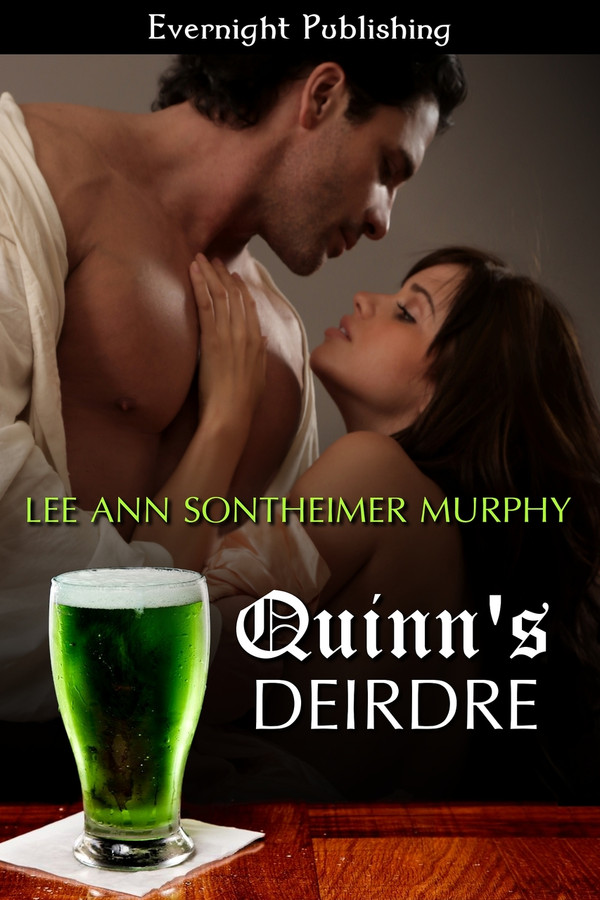 Three years ago, television reporter Deirdre King witnessed an organized crime hit and testified against the perpetrator. When he threatened her and the love of her life, Quinn Sullivan, she accepted the WITSEC offer for protection and allowed them to fake her death.

Now she’s cast aside her new persona and come back to Quinn. Her resurrection is a surprise, to say the least, but once he realizes she’s alive, the lovers reunite. Deirdre slips back into the life at Quinn’s Kansas City pub, County Tyrone, and works alongside him and his uncle Desmond. Quinn’s sister and family arrive from Ireland to celebrate a holiday but when the threat hits close to home, they leave.

It’s up to Deirdre, Quinn, and Desmond to face the danger—and survive.

Won’t ye come down? Uncle Des and I are going to sing a bit, later, but we can eat first if ye like. It’ll be good craic.”

His expression became so wistful it touched a deep chord within. “I will.  I’ve missed the music almost as much as the food.”

Deirdre glanced down at her outfit. “I think I’d better change first.”

“Ye’re fine the way ye are.” Quinn’s gaze raked down her with such obvious approval she swore she felt the heat. “But if ye want to wear something else, ye can.”

She smiled at him. “I’m sure I can find something better than this outfit. I didn’t bring many clothes, though.”

“I didn’t like most of the things I had.  They were as drab and boring as a nun’s habit,” Deirdre said.  It sounded lame, but he’d understand it more after they talked. “I’m glad I had some clothes left here, but sometime, I’ll have to do a little shopping.”

“If ye’re goin’ to the mall, then I’ll go along,” he said with a growl, a fierce frown marring his darling face. “I won’t risk losing ye a second time.”

A volatile stew of emotions simmered within.  Her wild, strong love served as the base, but the ingredients included guilt, self-blame, resentment at his apparent lack of trust, and anxiety.  Once again, she’d tilted her world on its axis and had to scramble to gain her footing.  Coming back was easier than leaving, but it required more care than she’d expected.  “You can go with me anywhere and everywhere for the rest of our lives,” Deirdre said and meant it. “I’d like to dress up a little, though and fix my make-up.  Do you want to wait while I do?”

Quinn sighed. “Aye, I’d like to, but I can’t.  Woman, you’re an aggravation, but I love ye.  Don’t take half the night gettin’ ready, please.”

“I won’t.” Deirdre rested her hands on his shoulders and lifted her face toward his.  He took the hint and kissed her. The moment his mouth touched hers, she knew it wasn’t the kind of sweet, tender kiss he’d shared since her return.  His lips burned with heat as he shared a blazing passion.  Combined with wild desperation and overwhelming love, the kiss proved more potent than Jameson’s best and caught her in thrall as if Quinn possessed supernatural gifts.  His mouth devoured hers, seeking and taking with the frenzy of a starving man.  Deidre answered him back, lips locked with his, game for whatever he sought.

She inhaled his heady man scent, so familiar and long denied.  Quinn smelled of the same soap he’d always used, a hint of the men’s cologne he favored, and of the pub.  A rich, delicious hint of alcohol lingered about him combined with cooking aromas from Des’ kitchen and added another layer to the pleasant smell.  Deirdre recalled it well, and it kindled her desires into open flame.  She raked her fingers through his thick, dark curly hair and clung tight to him.

His hot mouth strayed from her lips to deliver kisses and nibbles on both sides of her throat.  Quinn paused at the base to drop a tender, sweet kiss then moved lower.  He thrust his hands beneath her sweatshirt and undid her bra with finesse, a particular talent he hadn’t lost.  Quinn fondled her breasts with his hands, his thumb tweaking the nipples until they awakened into taut, hard pink blossoms.  “Ah, yer roses are bloomin’, love,” he whispered, his breath ticklish against her skin.  He kissed each nipple, which sent erotic shivers through her body.  The pure pleasure became almost too much to stand, and she whimpered aloud.

In response, Quinn took each, one at a time, into his mouth and suckled with slow tenderness.  Deirdre arched her back as every nerve ending in her body went on high alert.  She twined her fingers tighter in his hair until he undid her jeans.  “I think ‘tis time to hit the sack, mo ghra, mo chroide.”

She agreed and they managed to shuck their remaining clothing.  With hands fondling, fingers caressing, mouths connecting, they made their way to his bed and collapsed on it, face to face.  Quinn traced the edge of her face, then used his finger to trail down her body to her feet.  He tickled the bottoms and made his way upward as Deirdre sprawled back with legs spread wide in invitation.

Dear god, his hands are as hot as a demon’s straight from hell.  She gloried in the way his feverish fingers stroked her with appreciation and reverence.  “Ye’re so lovely,” he whispered. “God, I’d forgotten how much, though I dreamed of this near every night.”