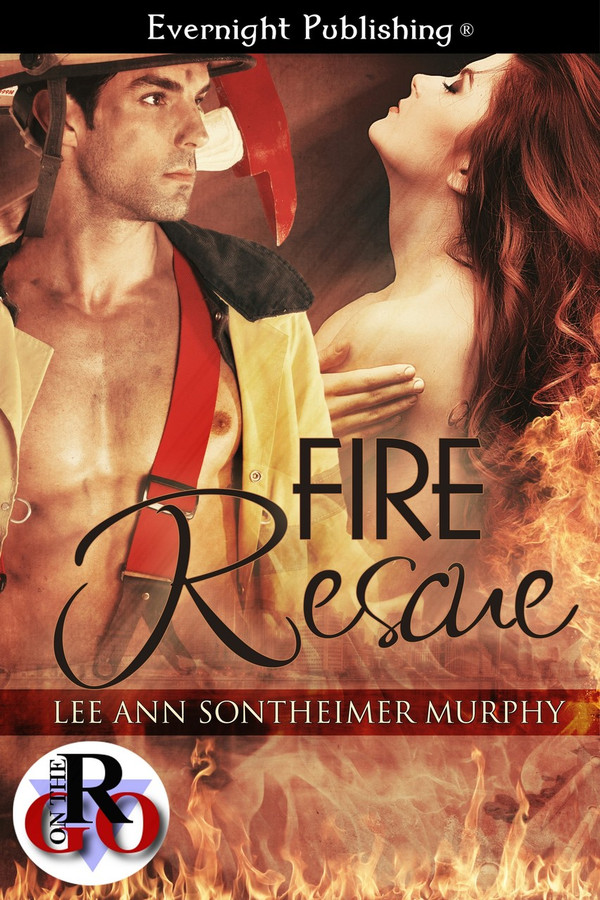 Aislin Tiernan is a high school English teacher by day and a psychic medium in her spare time. When a long dead Scotswoman interrupts a session, she delivers a warning for her grandson and wants Aislin to make certain he receives it.

Morgan Carmichael turns out to be one sexy hunk of a firefighter and a determined skeptic. Despite his lack of belief, sparks fly when they meet and the attraction is intense. As they get acquainted, they find more in common and by the time they tumble into bed, they are both halfway to falling in love.

Aislin’s visions confirm his grandmother’s warnings and when the major fire that could take Morgan’s life happens, she’s on the scene. Her rash action puts both their lives in jeopardy and they must fight to survive.

“So you believe me?”

“I don’t know. I’ve always been a skeptic, calling ghosts and mediums and all that kind of stuff bullshit. But I know Granny had some kind of a gift. I just haven’t let myself think too much about it since she’s gone. The one thing I do believe is that if she could warn me, she sure as hell would.”

“So you think I’m delivering a valid message?”

He drew a long breath and held it for a moment. “Look, I’m attracted to you, big time. I won’t deny that and I think you like me too. I want to see a lot more of you, get to know you, and all that stuff.”

Aislin’s body revved with a burst of desire. She could imagine the kind of ‘stuff’ he had in mind and she wanted it too. “But you think I’m either crazy or a charlatan?”

Morgan laughed. “That brings it down to basics in a hurry but I don’t think you’re either.”

“I’ve been called both, most of my life, and worse.”

“So you’ve always had this gift?”

“Yes, as long as I can remember. If you don’t think I’m crazy, what do you think?”

“I want to believe you,” he told her. “And I’d like to kiss you again after we eat to see if it was as awesome as I remembered.”

Heat curled lower than her belly and her mouth tingled with anticipation. “I’d like that,” she said. “I’d like it a lot.”

Even with the potential kiss hovering between them, potent and filled with promise, Aislin enjoyed the pizza and the conversation. Morgan asked about some of the flowers and who had planted them, then they talked about nature. A pair of chattering squirrels in the branches of the pear tree caught their interest and they laughed when the creatures tossed twigs in their direction.

“Me, too. I’m fond of scenery too like the sunset.”

Aislin glanced west and smiled. Vivid oranges lit the sky and a few darker clouds contrasted with the color in a gorgeous way. “That’s beautiful. I like dawn, too. As a little girl, I would get up early with my grandfather when I stayed at their house. He let me drink coffee and watch the sun rise. Those are good memories.”

Morgan nodded. “It sounds like it. Speaking of grandparents, is Granny around?”

Before she answered, Aislin scanned the patio. “She’s not at present, no. Why?”

She almost laughed, then didn’t. He had a reasonable question. “No,” she said. “There’s not. Why?”

“Because I don’t want an audience for this,” he answered.

Before she could process, he rose and bent down to latch his mouth onto hers with precision. Morgan’s kiss kindled her passion and Aislin gave back his fire with interest. His lips lingered on hers, caressing and demanding. The combination of gentleness with avid intent increased her passion. A fiery tide spread from her lips, down her throat and engulfed her breasts until her nipples hardened into taut points. Morgan’s breathing shifted into a rapid pace and he pulled her to her feet with one swift motion, then wrapped his arms tightly around her. Aislin leaned into him, greedy for more kisses, grateful for his solid body for support. His mouth brought hot flashes, then cold chills so deep she shivered. Between her legs, her pussy turned wet and ached with want. Her knees wobbled as he used his tongue to drive the kiss deeper and when Morgan rubbed her rock hard nipples with one hand, dizzy delight turned her head.

Lee Ann Sontheimer Murphy gives readers a swift, sensual sweet story with this erotic romance. Aislin Tiernan is a fantastic heroine as a high school teacher who is also a medium, what a fantastic combination. I love Firefighters as heroes and Morgan Carmichael is a fabulous hero. I enjoyed seeing such a factual man giving up his skepticism. However I wish the story was longer so that the reader could get a deeper connection with both these characters, and they with one another. I have no issues with short stories; in fact I rather enjoy them. I do believe that this particular story could have used a little more time to fill out the connection. I loved Morgan&#039;s grandmother she was such a breath of fresh air, especially for a dead woman. If you are looking for a quick read to enjoy during your break or lunchtime this is a good choice. Morgan Carmichael does not believe in psychic gifts, he has his hands much too full here on this plain as a firefighter but when he meets a beautiful woman outside his firehouse he feels an instant connection and he starts to rethink his beliefs. Aislin Tiernan is a high school teacher with a talent as a psychic medium when an elderly Scotswoman appears to her wanting to warn her grandson that his life is in danger. Can they get past their differences and survive the event separate them by death?

As much as Aislin Tiernan loves her job as a high school English Teacher, she can’t help moonlighting by night as a medium and help loved ones confer with the dead. However, when a nice elderly female ghost wants help in warning her grandson against danger in his job as a firefighter, it seems she’s found she’s up against someone who is skeptical of what she can do. Morgan Carmichael has never believed in the supernatural, so when Aislin comes to him with a message from his grandmother, he thinks she’s crazy because his grandmother is died. But he can’t help in pursuing a friendship with her that could possibly grow into more with the strong chemistry that exists between them. Again, this author has done an amazing job of penning a short story with a plot and dialogue which are both captivating and had me clinging to each of the characters words and back stories. It mustn’t have been easy for Aislin to approach someone who was a skeptic to her gifts. But how she made him believe her in the end was truly a gift because it’s what saved them both. As for the sex scenes, they were perfect where they were in the story because there was some serious chemistry between Morgan and Aislin from the moment they met; even if he thought she was a total quack at first. What I liked so much about Aislin was that even though she knew Morgan wouldn’t take kindly to what she had to say that she still confronted him anyway. While with Morgan, I liked that he finally got over his skepticism because believing in Aislin’s powers saved them both. Overall, this proved to be quite an entertaining novella but I was hoping it could have been a bit longer as it was such an enjoyable story.

Aislin was a medium which in otherwords she talked to the dead and tried to deliver messages from the dead to their loved ones who were still alive. She did readings mainly from her home but spirits didn&#039;t always show up during readings. Sometimes they have a mind of their own and show up anywhere and want her to go deliver a message then or as soon as she can find the person. This spirit showed up in her home and said she was there for her grandson. His name is Morgan Carmichael and she is his dearly departed grandmother. She had tried to contact him herself but he doesn&#039;t believe in these kind of things so Aislin needed to tell him he would be dying and hopefully he could prevent it, if he knew how or when. Aislin had the information she needed and she finally found Morgan. What she didn&#039;t count on was that he was so handsome. So she had to deliver a message to a gorgeous guy but the message wasn&#039;t a happy one. Watching the relationship between Aislin and Morgan was very sweet. They had problems like normal couples, it wasn&#039;t all happiness. The author touched on some not so happy things but the way she did write all of it, made me cry more than once. When a book brings forth my emotions and makes me turn the page quickly , then I know it&#039;s a very great book. These two were meant for each other and there were somethings that each had to get used to about the other one but that happens in all relationships which why this book seemed to be real to me. This author has talent to tell a story and get the reader involved from the very first page. I can&#039;t wait to read more from this author. Grab this one because you are missing out if you don&#039;t read this book