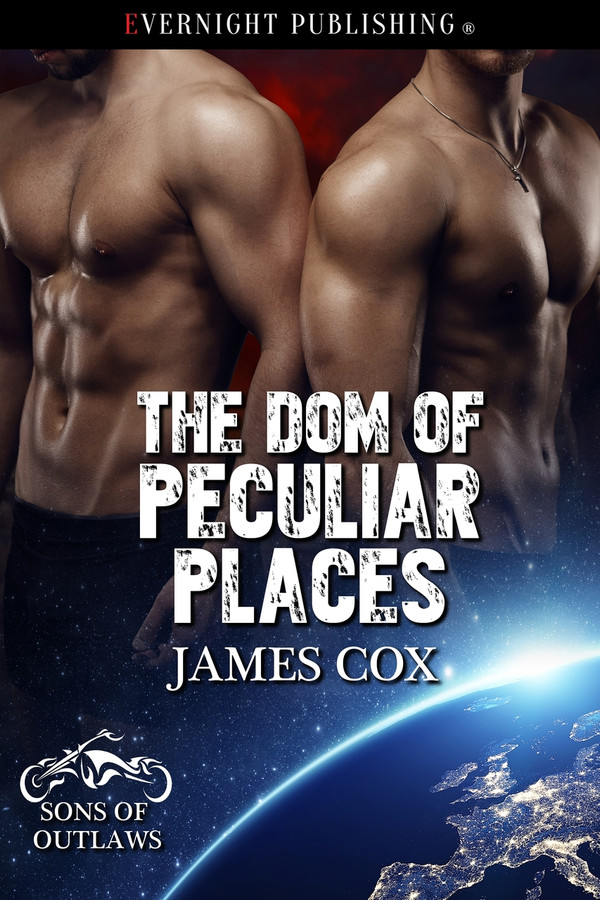 Twenty years after the Outlaw MC series, their children may not know the cost of war but they will know terror when Mars starts to reject humanity.

Get the lube, bring the blindfold, and don’t forget the restraints. Roark doesn’t play, he takes control. And when Roark finally gets Henry under him, not even a dying planet will stop him from finding his sticky, happy ending.

“You scared the hell out of me when you collapsed.” I grasped his ass cheeks, one in each hand, and squeezed. “If you ever lie to me again…” I left the threat unsaid.

“Damn right, you won’t.” I didn’t fucking tolerate that shit. And yeah, maybe I felt a bit guilty about pushing him so hard. I reared my hand back and smacked my palm against his right cheek.

Henry flinched, his head fell forward so his forehead pressed against the door.

“I told you I was going to spank you for that mouth of yours.” I struck again, palm to ass, softer than I normally would. My lovers usually left walking funny and unable to sit down. Okay, so I’d only had four, hey, I was only twenty, but they all had done the funny walk home instead of staying at the clubhouse. “Apologize to me.” I gave him another whack in the same spot.

One more and I slid my fingers between his cheeks to tease his hole. “How sorry are you, Henry?”

“Roark!” He groaned, shifting his hips and moving closer to the door.

I grabbed his hips, dragging him farther away. No way was he going to rub his cock on there. “Your dick is mine, Henry. You don’t come unless I tell you to. You don’t even fucking think of touching yourself. Understand?”

He nodded quickly and balled his hands into fists.

I gave his left cheek another spank and then shifted so I could make the right one just as red. I hit the fleshy area twice in rapid succession before Henry jerked forward. “Did I tell you, you could move?”

Henry whimpered and shifted his ass back out. A blob of pre-cum splattered on the floor.

I pinched his cheek before another slap. “You take whatever the fuck I decide to give you.”

Damn, he was as turned on as I was. I spanked him again, over and over until each slap with my palm made him jerk. “Totally uneven,” I muttered, returning to the right. I whacked his cheek, letting the sound surge me on. I wanted to fuck him so hard, so deep, for as long as I could fucking stand. I grabbed each cheek, squeezing hard as I eased them apart. His hole winked at me, and I lowered to my knees. “Beg me, Henry.” I blew a breath over his hole. “Beg me to touch you. To lick you.”

I jammed by thumb into his hole, and he let out sharp hiss.

“Good boy.” I pulled my thumb out, gave it a good spit and then gently eased it back in. I fingered him as I opened my mouth and slid my tongue over his reddened flesh. My thumb opened him, spread him. I kept pushing it deeper as I kissed along his ass crack. When I pulled my finger free, my tongue took its place. I rimmed his pretty hole, sliding along the skin and hearing him gasp only urged me on.

“Sir. Oh, Sir,” he muttered, his head hanging between his arms.

I nipped at the skin and then shifted to my feet. “You want to come, Henry?”

“Too bad.” I gave him another softer slap to his ass and then spun him around. I grabbed his cock, wrapping my fingers around the girth and holding tightly. “You have to convince me, Henry. Why should I fuck you? Why should I let you come?”

So, I read the first book in this series as was pleasantly surprised. I was looking forward to reading the next book in the series and it was so worth it!! This is the story of Roark and Henry. These guys were such a wonderful couple. I have to say that they were so darn cute together. Roarke is the quintessential bad boy biker and yet, he’s obsessed with Henry…a prospect into joining the MC’s. This story picks up during the time of the Earthquake of Mars and Roark and Henry are caught in a cave and they are having to figure out how to get out of the cave that has collapsed around them. A long the way they have to deal with the after tremors of the quake and the shifting of the cave and bad guys who are trying to kill them as well as the President of Mars. Roark is that bad boy that you know that you’d have a good time with. He’s sexy, smart and even though he’s in a situation that he’s not quite sure of…the confidence that he portrays in order to get them both out…I have to say that it was nice to see this guy who most would run across the street to avoid is this really sweet guy. I liked him a lot. Henry is this really sweet guy who has been on his own since he was a child and he’s going the MC for his own reasons. He wants Roark as much as Roark wants him and he’s all about Roark’s peculiar tastes. I like that this sweet guy is just what Roark wants and needs in his life. This story is filled with some good action and if you’ve read some James Cox’s books, you know that the sexy times are wonderfully described. This was such a fun, quick read that I was really sad when the story was over.

Mars in the year 3022 is not a friendly place, even though the tense political situation was resolved twenty years ago (see the ‘Outlaw MC series for details). Now that the original Outlaws’ sons are beginning to take over, a new danger appears on the horizon and it’s one that might be far more difficult to deal with than a power-hungry tyrant of a dictator. Roark is one of Mayhem’s kids, but takes after Whip, who is the club’s Dom. Yes, Roark is a bad*ss biker first and foremost, ready to intimidate the heck out of anyone who threatens an MC member. But, more importantly for this story and its heat levels, Roark is also pretty dominant in terms of his bedroom choices. He has no intention of falling for anyone, but fate has other ideas. Henry may only be a prospect, curious about joining the MC, but he is also more than interested in Roark. Not that he’d admit that… but when things get intense and they’re both stuck in a cave-in caused by yet another marsquake, Henry doesn’t hold back. Luckily he is quite willing to play a few games with Roark even once they’re out, but a secret he has kept almost kills him - literally. If you like the young men who make up the “next generation” of Mars’s Outlaws, if cave-ins and quakes don’t frighten you, and If you’re looking for a read in the best ‘Outlaw MC’ tradition with some of the old characters, a few political issues, and a bunch of ominous environmental signs, then you will probably like this novella. I already look forward to the next installment.

I am so happy to see this world be expanded, I loved the original series and am happy to see we get to read about a new generation. Roark is the son of Mayhem and Torrin and Henry is a prospect of the club. While the attraction is palpable but forces out of their control make it difficult for them to make it happen. While they are attracted to each other Roark has to deal with his feelings and if it is the right choice to get involved with Henry. I am super excited that this series and world is expanding; it’s great to see some of the originals characters still acting like horny teenagers with a rough attitude.

Always sexy with a running plot. Each story is like layers of an onion so if your not in it for the series move on. But this series is worth it the author builds worlds and relationships you can&#039;t get enough of.

What a fantastic series! The Sons of Outlaw MC are just as hot and sexy, hilarious and snarky as their fathers are! Roark and Henry get trapped in an underground tunnel after a quake hits Mars. Buried under rocks and the air is thick and hard to breathe. After moving some rocks they find a narrow passage and try to find a way out. Of course there is one obstacle after another and they even run into trouble when they come across two men with guns who fire at them and wound Roark! There is plenty of heat between these two and they are just getting started, but first they have to get out of the tunnel to safety and Henry collapses due to a lung disease and he is unable to breathe. Roark&#039;s number one priority is getting Henry out of the tunnel and into the chamber so he can breathe. An awesome read and I recommend this series!

James Cox has done it again! Love this series! Roark has found his obsession. It is with the prospect Henry. When a quake hits and they get trapped in an underground tunnel, the mutual feelings can&#039;t be denied. What&#039;s a prospect to do when a bossy Dom brings out his subby side? Things get worse for our guys on Mars but it&#039;s just the beginning, with a move in sight, can Roark admit what he actually feels for Henry? Saucy sex scenes and lines that make you giggle....everything you would expect from a James Cox masterpiece!

W.O.W.!!! Just...wow. I really liked Roarks and Henrys story, it just has it all. It&#039;s sweet, humorous, sarcastic (I really love Henrys sarcasm!!) and gets along with a lot of sexy playtimes, oh yesssss! I love Mayhems book of the Outlaw MC series, it&#039;s one of my faves, and now to see his and Torrins son, dang, that was a great ride. And even better, Mayhem and Torrin got their little times in the show, too. *happy dance* Besides all this awesome sweet and hot as hell kinky times, which let you think that Whip maybe did the babysitting Job a little bit too often, well, we have some new twists and turns within the whole storyline of the series about the Sons of Outlaws, and their is something intriguing coming our way. Now I can&#039;t wait to get the next installment in my greedy hands. Just how did Henry say it? Oh yes: I.NEED.MORE.

Our Place Among the Stars by James Cox