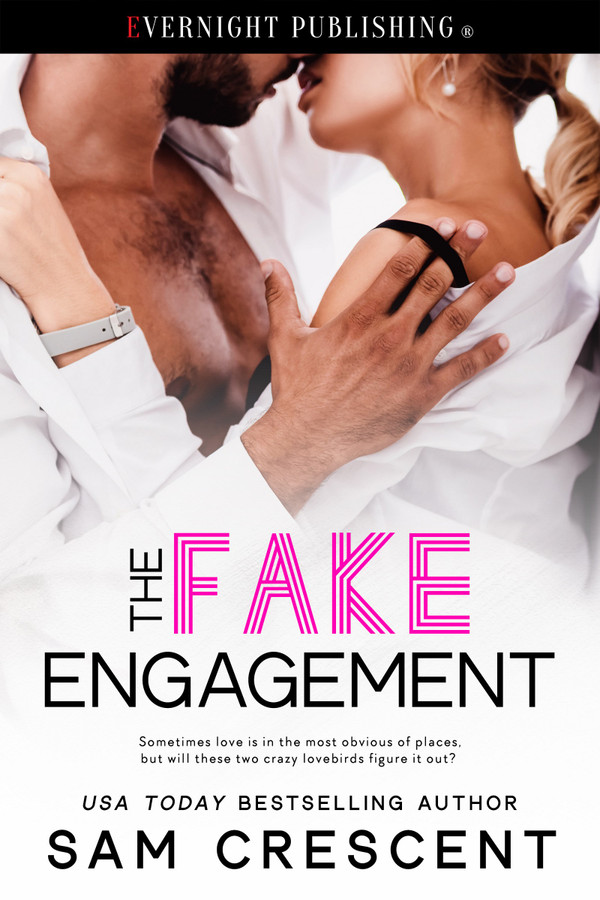 Coming from a town run by his family, Preston Boone has wanted to prove everything isn’t handed to him. He’s achieved all his goals, showing them he can make it on his own. But now, with his parents celebrating a big wedding anniversary, he knows they’re going to parade all the eligible women in front of him. A little white lie of an engagement couldn’t hurt, could it?

Eliza Drake hates her good-looking, workaholic boss. After one night of tequila, she’s fake engaged to her boss. For one month, she has to play the role of a happy fiancée, and in return, she’ll never worry about her job ever again. One month of sharing a bed, of accepting Preston’s kisses, and the feel of his arms … nothing could go wrong, right?

Sometimes love is in the most obvious of places, but will these two crazy lovebirds figure it out?

Preston went over to his father. “You need any help?”

“Never come between a man and his grill, son. You know the drill.”

He laughed. “Yeah, I remember. Even when we were kids you were pretty protective of this grill.”

“There is nothing wrong with wanting to protect. That’s all I’m saying.” His dad held his hands out.

It was a large grill. There were three separate iron grills, and the coals underneath were spread from extreme, to mild heat.

“The art in grilling is knowing when everything is cooked. You know the story of how I poisoned your mother the first time I got this grill.”

Preston laughed. “Yeah, I remember. She told me she wouldn’t eat a thing from you until you took a food safety course.”

“The woman was right. I was cooking my chicken all wrong. Now, I know the sweet spot.” He kissed the tips of his fingers and raised them in the air. “Your mother loves my grilled food.”

Preston folded his arms. “You haven’t said anything about Eliza.”

“What do you want me to say?” Greg asked. “I haven’t gotten the chance to talk to her. From what I see, she’s a nice girl, but I can’t go giving you an opinion based on looks alone. She seems nice. That’s all I can say.”

“Dad, come on. I know you adored Lydia, Grace, and Scarlett the first time you met them.”

Greg sighed. “No, Preston, I didn’t love them the first time I met them. All you heard was the boys’ interpretation. I reserve all of my judgments until I get to know them better. You, of all people, should know that.”

“And why the hell should I know that?”

“You’re a businessman, Preston. You know that you’ve got to keep your feelings pretty close to your chest. You can’t let the world be able to read you. But I do have a question for you, son. Have you stopped being able to read yourself?”

There were moments, like now, that he hated his father. Greg Boone was a good man, but he was also the kind of man who saw everything.

Pretending with Eliza was a long shot.

His dad wasn’t convinced, which was why he wasn’t going to call her out.

He should have seen this coming. Even if he’d done nothing wrong but was thinking about doing something, his father always caught him prior to the act. His dad was a goddamn machine when it came to reading them.

He had to do something with Eliza. To make them believe.

“You’re firing up the grill?” Marsha asked. “I just knew you would.”

His mother appeared out of thin air.

A chorus of mommies filled the air. The kids moving out of the pool, running to their mothers.

Preston watched, feeling a little empty inside. One day, he wanted kids. A whole fleet of them. Kids hadn’t been in his future, not while he had a career to build up. A name to make for himself.

Roger took one, as did Kian, leaving her free and clear.

He walked toward her. Those lips called to him, and he didn’t care if this broke their kissing rule, or if it pissed her off.

Sinking his fingers into her hair, he pulled her in close against him. Not caring there were children present, he finally kissed Eliza like he’d been dreaming of since that damn elevator.

He stole the kiss he’d wanted to take all of those months ago.

At first, Eliza was tense in his arms, her body too stiff to enjoy. One taste wasn’t enough. He traced his tongue across her bottom lip and heard her gasp, opening her mouth, and he took full advantage, plunging his tongue inside.

Eliza gripped his shirt. She didn’t push him away, and he felt that was an achievement all on its own. Deepening the kiss, he heard her gasp, her moan.

Someone cleared their throat.

Coming back to the present, he kissed her on the lips one more time. “I missed you,” he said.

“I noticed.” Her lips were swollen.

He wrapped his arm around her waist, pulling her against his side. “She hasn’t been away from me in nearly three years.”

Preston was also terrified of what his parents would say to her.

Wow as usual Sam what a fantastic read. I really didn’t want this book to come to an end. I loved all the characters in it and the way they were as a family too. But the bit I enjoyed the most was the slow reveal of what their true feels were to each other and the way he told Eliza, her friends, her family and his how he really felt and both their lists. Loved loved this book well worth the read and no disappointments either.

This was much better than most of same type books. Oddly for Sam&#039;s books, this one took me a bit to get involved but was a superb read. Watching Preston and Eliza try to fight their feelings for each other while slowly falling in love was great.

The Fake Engagement by Sam Crescent