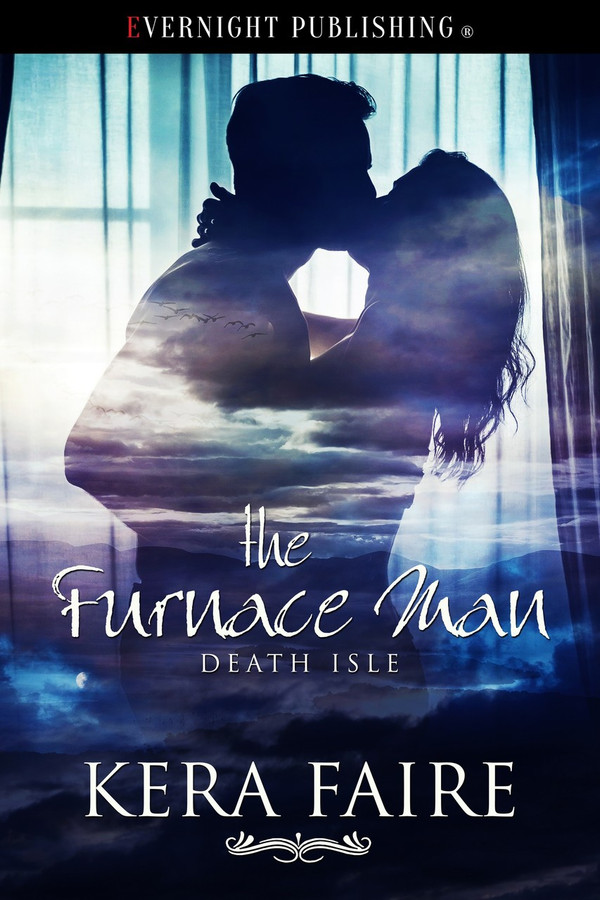 Don’t piss off the furnace man.

It might be a standing joke around the glass factory—he’ll mix you with the sand and burn you, leaving nothing left to discover—but Lindsey Earnshaw is about to find out the truth behind it. Placed there to spy on the place on behalf of the government, a warning message brings forth not only a dead body, but also the one man she’s never forgotten.

Michael Hoult cannot believe his eyes, when his ex-wife turns out to be the receptionist on duty. Having to drug her in order to not blow his cover will not earn him her renewed submission, neither will whisking her away to the Death Isle. Duty first, though. It cost him his marriage all those years ago, but with Lindsey now working for the same side, can they not only catch a killer, but also rediscover each other?

“Nice now, safe word or suck me off.” He waited as she gulped and hesitated. She swayed towards him and straightened. Many people didn’t involve sex in their play; he and Lindsey always had and that was how he wanted it to be now. However, he remembered oral was something she’d never been keen on and eventually said it was a soft limit. It had never changed and nor had she gone down on him more than a few times, and never ever swallowed his cum. Not something he’d ever encountered before or indeed after Lindsey. She’d tried and after gagging and throwing up, had said swallowing was a big fat red no-no. He’d accepted it, but had missed that special closeness only being jerked off by your partner could bring. But Lindsey was his lady, his sub, he had loved her—still did—and her pleasure came first.

Perhaps it was unfair to throw her into this scenario so quickly, but he knew his pet. She could go round the houses forever. He intended to show her he would not be fazed or upset by her limits whatever.

“Pet, you need to tell me where you are in this. Safe word.” He rapped his demands out. “Now.”

“Green to lick,” she said so softly he had to strain to hear. “I hope.” She took his cock in between her hands and delicately licked the head.

His pre-cum leaked fast and furious and she drew back and looked at it.

Typical. The one time I could do with it taking its time, it comes like the clappers.

“It’s fine,” she said with awe in her voice. “Green.” She took more of his length in her mouth and began to nibble and suck.

He saw stars as the tug and pull became stronger. God almighty did she know the affectshe was having on him? He was going to come if she didn’t slow down or pull back.

“Pet, enough, I’m about to shoot.” Michael tugged her hair, hard enough to make her release him. Or so he hoped.

His command evidently got to her because she moved her mouth from his cock with a gentle plop. The confusion and hurt in her eyes hit him. “Pet, baby steps,” he said softly as he helped her to her feet. “I would happily fill your mouth and fuck it. But, not today. We have so much more to explore and hopefully have a lifetime to do everything in.” Would she understand without him getting too graphic? “I want to fuck your sweet pussy. Fill you that way. Relearn how you sigh and how well our bodies mesh. Make you scream as you come. Shudder and shake for me. Show you how much I love you, have never stopped loving you, and want this to be our happy ever after.”

Lindsey sighed and her eyes became misty. “Sir, My Michael, oh yes. I feel the same. You are mine.  My lover, my friend and my Sir. I want it all as well.”

“First then.” Michael paused, tugged off her cardigan and threw it onto the floor. That’s better. Now…” He unzipped her jeans so he could run one finger around her panty leg. “Firstly, I want you naked so I can spank your sweet ass until it’s the rosy color of that cushion over there.” He slid her panties and jeans down her legs and helped her step out of them. “I want to see my handprint and know that outline shows you are mine. Arms up.” Her t-shirt followed the cardigan. “Stand still, just like that with your arms up. Don’t lower them.”

Michael waited as she did as he demanded, grabbed her ass hard to keep her in place and lowered his lips to the lacy cups of her bra.

He took that as a good sign, let go of her nipples and ignored her moan as he blew on each hard nub in turn. Deftly he unclipped her bra and flung it in the direction of the rest of her clothes. Now he wished he’d taken her to the playroom. He knew no one was playing in it and he had a cupboard full of delicious things he could use on her. All still new and in their packets. Here, he’d have to be innovative and make do.

At least he had his hands. Michael unclenched his fingers and watched her pupils dilate as he smacked her ass a couple of times. “What color are clothes pegs?” he asked casually. “Specifically on your breasts, nipples and ass.”

Michael smiled. “Oh yes. But maybe not yet?”

She nodded. “Perhaps not. I need to rediscover pain, I reckon. Let’s say yellow.”

“Then maybe we should start.” He pondered for a moment. “Here, I think.” He sat on the nearest chair and pulled her to lie over his lap, head to one side, legs to the other. “Color, pet?”

He could visualize her rolling her eyes at him for being so insistent. However she answered him readily, and politely. “Green, Sir.”

“Then, pet, count. Ten on each side and then I’m going to fuck your wet and willing pussy.”

Michael laughed as he raised his hand. He hit her right buttock firmly and then rubbed away the sting as she gasped.

“Good girl.” He repeated the actions on the other globe. By six on each side Lindsey was writhing and he opened his legs enough to reach between them and pinch her clit hard. “No coming or I’ll stop now.”

So excited that we have another Death Isle book out by Kera Faire! I just LOVE these books. (Admittedly, the pigs on the island make me a tad nervous though.) I’d love to be carried off and interrogated, maybe by two dispatchers. (as long as I wasn’t dispatched yeah?) Ahh those good cop bad cop kinky fantasies. Anywho, back to the book, The Furnace Man is the latest Dark Isle book to hit the shelves and it’s a juicy one. Just like with Andie and Rio, Lindsey and Michael are at an impasse in their marriage because Michael has had to lie about his job, so Lindsey leaves. But instead of turning to hooking. (You’ll have to pick up Killer At Christmas, a novella, to figure THAT out) Lindsey gets a job with our old pal Darke. She ends up at a glass making factory where she has an assignment, but what happens when she’s on the look-out for someone who’s using the furnace to hide bodies and she runs into her ex-husband Michael? It’s an interesting trip to the Dark Isle this time. Just loved this one! The stories are short, but oh so good! And frankly, it’s fun as a Yank trying to discern Kera’s Scot’s vernacular. Thank Goodness for Google! But hey, it makes it that much more fun!

This story continues Kera&#039;s Death Isle series and is Michael and Lindsey&#039;s story. Right from the start, it hooked me in. Michael and Lindsey used to be married but when he couldn&#039;t tell her where he was going all the time, she decided to leave. Now, years later, both are working for the same boss and Lindsey is about to learn why Michael left all the time. Mistakes were made on both of their parts but will the years apart still stand in the way? Or will they be able to finally be together like they&#039;ve desired too? The story has some drama, some intrigue and oh yeah, some hot sex!! LOL Really, really enjoyed the story and I can&#039;t wait for book 6!!!