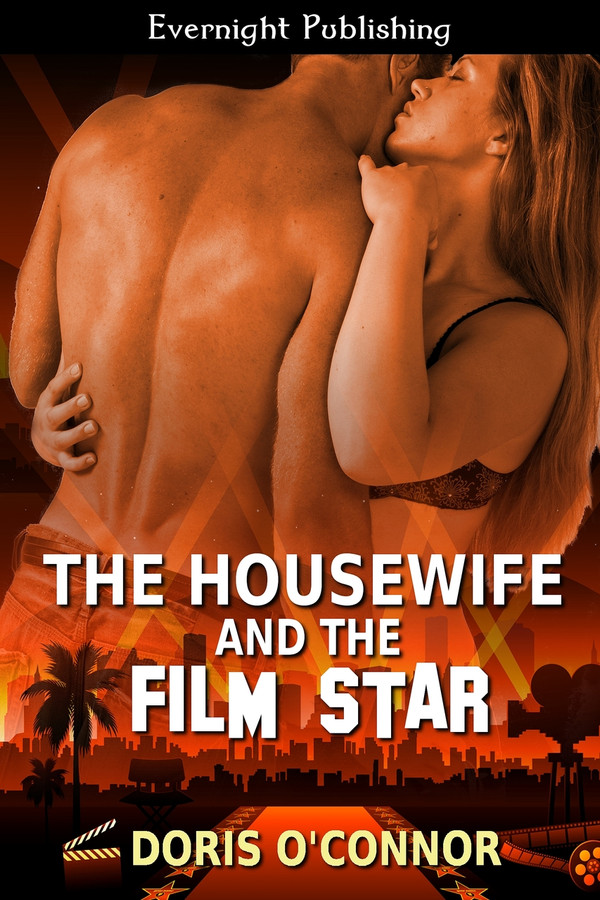 When international movie star Sven Larsson meets young widowed mom of three, Sylvia, the sexual chemistry between them is instant and explosive—and plastered all over the papers. Sven needs to repair his damaged reputation. The last thing he needs is another scandal, but the Dom in him can't resist the challenge Sylvia represents.

Having survived an abusive marriage, Sylvia is not looking for another relationship, let alone a kinky one with a man of Sven's reputation. Her submissive side can't help but be drawn to him, especially once she gets to know the man behind the public image. She can't help but fall in love with the private, broken Sven—even if he doesn't do love.

With the paparazzi breathing down their necks at every turn, and past demons raising their ugly heads, will they ever be able to find happiness?

Previously published as Scandinavian Scandal. Revised and expanded for Evernight.

Sylvia wrenched her gaze upwards to meet his eyes. He was watching her reaction from under heavy lidded eyes filled with lust and a grim determination that frightened her a little.

Before she could even blink he was on the bed next to her, matching his long length to her much smaller frame. He grasped her wrists in one hand again and pinned her arms above her head. With a wicked smile he used just one finger of his free hand to slowly travel up the inside of her thigh. The slight pressure was torture, and by the time his thumb flicked her clit, she was a quivering mass of feminine excitement. How did he do that? Was it the unwavering focus with which he watched her reaction, or simply the way he once again had her pinned, unable to move?

The kiss that followed seemed never-ending. In direct contrast to his earlier urgency, he took his time exploring the inside of her mouth with a breathtaking thoroughness that spoke of ownership. The more she tried to hurry him, the slower he went, pressing his heavy body on top of hers, until the whole word narrowed to just the feel of him. Every stroke, nip and suckle of his oh so talented tongue, stoked the slow burning fire in her core to fever pitch, and her hips bucked wildly, needing his touch.

He straddled her, effectively stopping her from moving and looked down on her.

"Take it easy, we have all night, my little firecracker. We'll do this my way, and unless you want me spanking that delicious ass of yours until it matches the color of your lips, you will not rush me."

"Liar." He whispered the word and lifted off her just enough to cup her swollen pussy. Sylvia swallowed her groan as he swiped his fingers through the wet evidence of her arousal, and then lifted his glistening fingers up for her to see.

He licked them clean and hummed his approval.

"Hmm, delicious. If you don't like the idea of my hand on your ass, then why are you this wet?"

Sylvia had no answer for that, so she just shook her head.

She screwed her eyes shut and pushed the memories away. They had no place here, none at all, damn it.

"Neither do I, my sweet, but I think we need to do something to stop those thoughts swirling in your head. Look at me."

His voice had dropped an octave, the cadence of it so compelling that Sylvia had no choice but to comply.

At her tiny nod he sighed and bent to kiss the tears off her face. She hadn't even been aware of shedding them.

"I can help you with that, if you trust me?"

He went so still towering above her, she couldn’t be sure he was even breathing, and when she nodded again his smile of approval made her worries float away.

He released her completely, and she felt suddenly bereft without his comforting presence. She awkwardly complied and jumped when he grabbed her ass and squeezed.

Instead of the hit she was expecting, however, he moved his hands up to her shoulders and kissed her neck. Tiny butterfly kisses followed down her exposed back until he reached the zipper of her dress. With agonizing slowness he peeled her out of her dress, murmuring encouragement when she helped him by lifting her arms and finally her hips, until she lay face down on the bed with just her bra still on.

Much to her surprise he left it in place and continued to run his hands up and down her back and over the curve of her ass. The strokes grew harder, leaving tingles of awareness in their wake, and the last of her anxiety fled.

Heat suffused her whole being, and she raised her butt into his hands, willing him to delve lower between her legs, where she practically ached for his touch.

He slapped her lightly on one ass cheek, and she froze.

"If this gets too much, just call red, and I stop, okay?"

She nodded, and a harder swat followed to her other butt cheek, which this time stung.

His laugh in answer confused her. He fisted his hand in her hair and pulled her head up to study her.

"Very nice, but that's not really a salutation I've earned yet, and this is just a little spanking. I don't think either of us is ready for anything else right now, are we?"

She blinked, and the red hot stab of disappointment coursing through her veins took her breath away.

"If we were to go down that route, we would have to discuss a lot of things first, my sweet. I'm not sure I want to do that. Let's not assume titles and just enjoy ourselves, shall we? Unless this is something you need to—"

"No, I don't. I mean, I'm perfectly happy with vanilla. I just thought that's what you wanted. I mean … I…"

Her voice trailed off when his expression darkened.

"I thought you don't read the papers, lady."

"I-I don't, but there's been rumors and, well, I do have some experience."

She mentally crossed her fingers at her fib. Sylvia had experience and then some, but he was right. She was so not ready to have that discussion now. It would dredge up a past she didn't need to remember, not now.

"So, you're familiar with the traffic lights then?" he finally asked with a small smile.

Heat rose in her cheeks under his quiet regard, and finally he nodded.

"So be it. I trust you to use it, not that I have any intention of being too hard on you, but I've fantasized about reddening that delicious ass of yours since I met you."

He laughed at her astonished snort in response.

"You have?" she asked, not really believing a word of it. He had to be kidding. "No need to humor me. In case you haven’t noticed I'm in your bed and a pretty safe bet by now, you know."

His expression darkened again, and her stomach dropped in delicious anticipation.

"For that inane comment you've just earned yourself some extra spanks. We'll have to work on that warped self-image of yours. You're a beautiful, desirable woman."

THE HOUSEWIFE AND THE FILM STAR starts with a bit of a bang…well more like a wobble…of the high heels kind. But then…oh…oh…mmmmm…insta-attraction of the right kind mixed with a hefty dose of sass. I love this story. It has so many bits going for it ranging from Sylvia&#039;s initial cluelessness over who Sven is to the paparazzi to Hard Head (laughs) to her absolutely adorable whip-wielding neighbor (I&#039;ve always wanted to say that), and I haven&#039;t even touched on their relationship or their interactions. One of the aspects I really enjoyed is the plausibility that this story could happen to most anyone. It takes the level of fantasy to a reality level that makes it that much more fun. The dialogue and outright sass made me snort in amusement on more than one occasion (more like dozens), which also made the drama that much more endearing along with me hopeful that they will have their happily ever after. This is partly a story of redemption coupled with the knowledge that everyone and anyone can find love even if it means &quot;almost [breaking] her nose on an inconveniently placed wall of muscle.&quot; And well, really, that&#039;s the best way. - See more at: http://erotic.theromancereviews.com/viewbooksreview.php?bookid=12006#sthash.6HFMZg7N.dpuf

this book was great. had fantastic characters good development and a nice story line.love the work from this author

Despite the unconventional way they met and the differences in their lives, the chemistry between movie star Sven Larsson and widowed mom of three, Sylvia, is obvious. Especially to the paparazzi who happen to catch them and soon splash them and rumors of their mutual kink all over the papers. Sven has been trying to repair his reputation but no matter what, he finds he can’t stay away from Sylvia. The Dom in him is drawn to Sylvia’s submissive side, and despite surviving an abusive relationship Sylvia is having trouble resisting him. Almost hardest of all is that they are genuinely coming to like each other, maybe even falling in love. But can that really be sustained and nurtured in the glare of the spotlight? Or will the past and the present collide and tear them apart? I think this is one of my favorite books by Ms O’Connor! There are some great scenes between Sven and Sylvia that are both hotter than hot and at the same time incredibly sweet and touching as Sylvia deals with issues from her abusive marriage. Not that Sven doesn’t have his own issues to deal with. I want to make sure I don’t downplay the sex scenes in this book because, Oh man, you won’t want to miss them. But overall both Sven and Sylvia just seem so very human and like they could be your next door neighbors that it enhances the really strong story this book has going and the incredible sexual tension between them. Even the side characters, like their families and neighbors, are really well written and often add a great touch of humor. In fact Sven’s nickname for Sylvia’s youngest son made me chuckle every time I read it. This book should definitely go on your must read list!

This was such a good book! Sven and Sylvia had an unconventional meeting, but these two had chemistry! These two had to persevere through more than most new couples. I loved the book and Sven stole my heart. Sylvia may have had a lot of crap happen to her, but she was a kick ass and her kids were there backing her up.