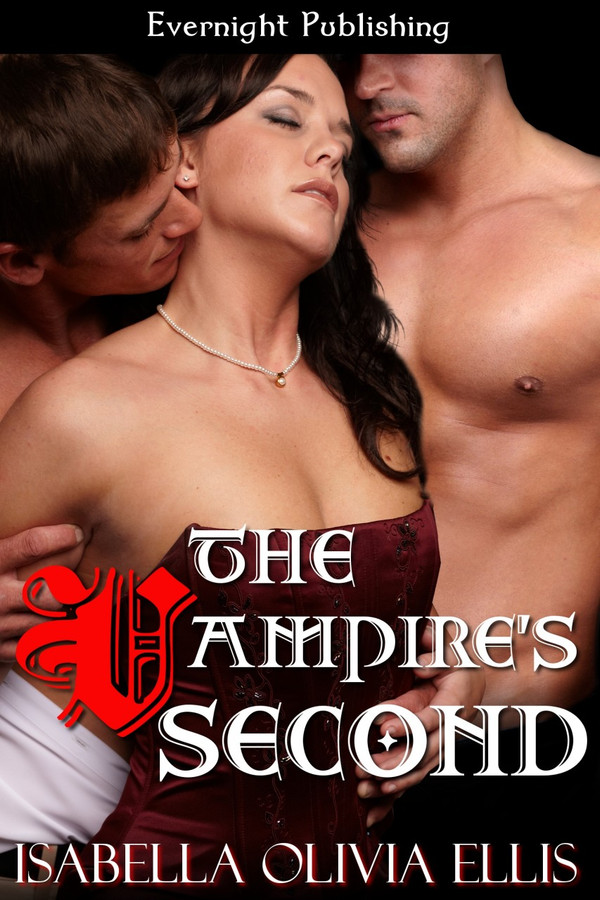 Caroline is the key to fulfilling a prophecy. Her marriage to Prince Sloane is the final seal on his destiny to unite countries and lead an empire. He declares war on a rival vampire clan, but before he leaves he makes one request of Caroline. That she take her childhood sweetheart, Lord Luke Stone, as a Second.

A Second is man who binds himself to a woman with the promise to protect her at all costs and acts as a surrogate husband. To appease Sloane, Luke and Caroline agree. After he leaves, the royals of Bernehart are sent away for their own protection. While in exile, Luke and Caroline find themselves drawn to each other once more. They not only have their desires to contend with, but also danger from their enemies. And the big question is, what will happen to their relationship when Sloane returns?

The discussion did not go as either had planned. After a few minutes of chatting, Caroline realized that Luke was trying to pretend as though nothing was between them. She raised her voice at him and he stood up to leave.

Before he could, Caroline shoved him in anger. Even with the added strength from being an Other, it was ineffectual at best. He took several steps away from her, pressing his back into the wall. Not caring that he seemed to want to get away from her, she propelled herself toward him and screamed,

“You’re being a coward, Luke Stone. A plain old coward.”

“How am I being a coward, Caroline? Because I don’t want to partake of another man’s wife?”

Without thinking, she slapped him across the face. He winced, but stood his ground. “It’s not like that, and I know it’s crystal clear to you. You’re his Second, so it’s not adultery.”

“Does a mere ceremony really change that much, Caroline?”

“I could ask you the same thing, Luke. Is a wedding, at its basest, not a mere ceremony? Don’t hold yourself to one creed and ignore another. It is unbecoming.”

Luke wrenched away from her grasp, his sleeve nearly ripping from his effort. With his back to her, he looped his fingers together behind his head and stood there like a winged angel.

To his back, Caroline cried, “I love you. I have loved you since I was a little girl in short skirts. And I know you love me. What are we doing this for, I beg of you?”

With a quick turn, Luke silently scooped Caroline up. Arms locked under her ass, he spun both of them so that Caroline’s back was now to the wall. He held her up so that they were face-to-face, rapid breath from each coming toward the other. Her eyes were level with his, and she couldn’t decipher the expression in them. The air between them was thick with tension. Caroline could almost taste their mutual desire. Pressing her harder to the wall, he slid one hand out from under her and plunged it into her hair. She felt his fist curl around the tresses at the base of her neck and he pulled her face towards his.

“Do you truly love me, Caroline?” he whispered, with a voice that was thick and rough.

She couldn’t speak, and only nodded.

“Say it.” He demanded this of her, tensing his grip on her hair.

Caroline swallowed hard, her want frozen her throat, and said, “I love you, Luke Stone.”

He seemed unable to be gentle in his current frame of mind, but Caroline found herself not minding. Their movements together were rough and quick, a combination of both their flared tempers and the desperate desire to consummate their relationship. With his free hand, Luke lifted her skirts high enough so her lower body was bare in his grasp. Caroline dug her fingernails into his shoulders and slid her legs so they wrapped around his waist. After a moment of frenzied fumbling, he had his trousers loose and down around his ankles. She felt his cock brushing against her cunny as he adjusted his hold. Then he looked her directly in the eyes and made another demand:

“Tell me that you want me, Princess.”

At the sound of desire in his voice, Caroline couldn’t help but dig her nails deeper into his flesh. She leaned forward so that her forehead rested on his and said in her most serious voice,

Luke didn’t need any more invitation that that, evidently, because in one quick thrust his cock was within her for the first time. It was so strange to feel him move inside of her after so many years of unfulfilled desires. He felt even bigger than she had anticipated and the walls of her pussy stretched to accommodate him. Each slight movement was an exquisite sensation. He moved both hands to her waist and with her back still pressed against the wall began thrusting slowly. Through gritted teeth he said,

“You feel as delicious as I always imagined you would.”

Caroline tightened her legs around him and pushed against the wall to meet his rhythm. Her pussy was dripping with her want and she could feel their moistness mingling together and running down her thighs. Luke’s hands curved down to cup her ass, and still inside of her, he carried her over to the bed. He pulled her from him and turned her around so that she was bent over facing away from him, with her rear pushed out toward him. She felt his hands on her, traveling over her thighs, past her ass, and then sliding down her belly and under her scrap of a gown.

Other Books in the CHOSEN series:

The time has come for the prophecy to be fulfilled and Prince Sloane to unite the countries, becoming the leader of the people. Prince Sloane declares war on the rival vampire&#039;s, but before he leaves he must make sure Caroline is protected above all else. The Prince has asked her to take a second, a man who would bind himself to her and protect her above everything else, becoming a husband to her just as he would be. He has asked her childhood friend and lover to be that person and now they just have to convince her that it is for the best. After Sloane leaves, Luke and Caroline are sent into hiding to protect them when it becomes known that they will be attacked. While in exile, they are drawn back together and realize they still have feelings for each other. The problem is, what is going to happen when the Prince comes back? Will Caroline be able, or willing, to give Luke up again? Will she be able to accept Sloane as her husband, and the big question is, what if Sloane doesn&#039;t come back at all, can Caroline live with that, especially now that she realizes she&#039;s in love with both of them? The Vampire&#039;s Second is the second book in the Chosen series. I think this one was the best as it was more romantic and more fun to read. It showed a man willing to give up everything for the love of his wife and another man willing to give up everything for a woman he had loved all of his life. There was action and adventure as well as some pretty hot sex. Not to mention Caroline learned that she could do things that she would never have imagined!