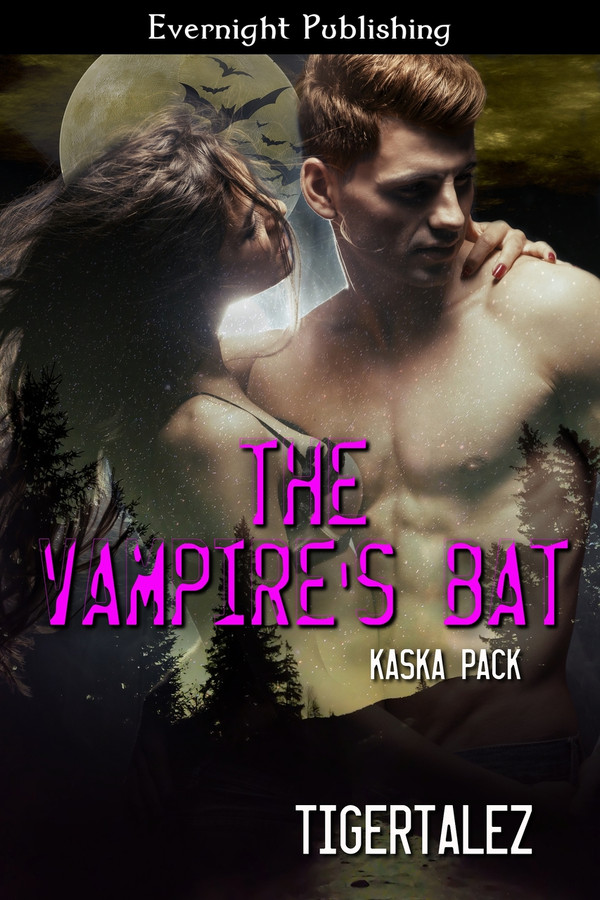 When the mystery visitor he has been scenting for just over a week suddenly appears in his infirmary, wearing only his shirt, Seamus’s bonding instinct slams into him hard. But Maysa has been an experimental test subject and has developed a fear of needles so severe she cannot get past his fangs, and this delays their bonding. The delay sends him into a coma, and his only possible salvation is the blood of his beloved, who is still afraid of his fangs.

Maysa’s shifter scenting ability is off, so she can’t be sure Seamus is really her mate. Still, with other shifters, including her family, stuck in the hell she escaped from, and a perverted, sick and twisted hunter after her, she reaches out to Seamus. Placing her trust in his hands, she learns two very important things: don’t let your fear hold you back, and when it comes to her, Seamus is no mild mannered medic. He’s a force to be reckoned with.

“That tall brunette is Alphy’s sister, Havana. That tall guy there is her mate, Dultyn. He’s going to be our protector while we’re out. Apparently, we girls can’t avoid trouble every time we go to town.”

The title snagged me but the story kept me. It’s a very busy yet fascinating book that brings together many elements of what makes a tale entertaining. Action, suspense, heroic actions and two diverse people coming together to fall in love amidst trying times are just some of the highlights that I enjoyed. Seamus and Maysa are two vastly different kinds of people, literally. Yet, they have a lot in common, not just that they are destined mates but because of the fields they worked in. It made sense and in came in handy when the plot crisis hit. I believe this book is smack dab in the middle of a series yet I didn’t feel lost. In fact, I thought the way the author caught me up to speed was clever. It almost came across like an info dump but in essence it was getting Maysa up to speed and her reaction and mine were the same, Wow! What was different is that it made Maysa feel guilty for adding to the pack’s challenges, while I was left with the feeling I should really read the back stories. They sounded exciting! I enjoyed meeting all the people that were in Seamus’ world and found them pleasing and personable. I liked the feeling of support, camaraderie, caring and love that seemed to abound on various levels. These were people that were survivors, and they had a lot of love to give others. That was more than apparent when the group pulled together to perform a daring rescue. What they found was horrible, tragic and what amounts to a declaration of war. I like how everything was handled but there certainly were a lot of people to keep track of. The point of view was mainly between the main protagonists, Seamus and Maysa. It was their growing relationship that was the focus of the story but there were a few sub-plots in there too. This book was better than a soap opera because I got closure on quite a few of them. There was even a short bit from Max’s POV, but I think that was a possible lead in to a future story. Sure sounded like it would be interesting. The dialogue fit the characters, the writing was perfect and the villain was wonderfully evil and unrepentant. If he’s a symptom of the greater evil, then this series has the capacity to turn dark really fast. I hope that doesn’t happen because I found this story well balanced with a focus more on love than hate, and I prefer that. When the hero and heroine finally are able to consummate their love, it was well done. Just enough description to show how well matched they were and how hot their passion burned. I enjoyed all that biting. The title of The Vampire’s Bat may sound silly and comedic but it’s not. This novella takes the romance very seriously. The plot is meaty and the story is fascinating. This is a great choice for paranormal romantic suspense readers who like their books with a sexy edge.

Maysa reaches out to Seamus and places her trust in him to keep her safe and the hunter after her better take note because Seamus is a force to be reckoned with in this action packed paranormal romance. Seamus’s bonding instinct is riding him hard but his mate’s terror of needles holds him back and the reader can’t help but get excited during the non-stop action while the emotional impact of the story grips the heart. The pull between Maysa and Seamus is strong but with everything she’s been through, Maysa’s unsure about Seamus being her mate but that’s not all the romance in this story as there is couple of others among the Kaska Pack who get bitten by the mating bug. The strong captivating characters of the Kaska Pack demand reader’s attention while stealing the heart and the fast paced, smooth flowing plot thrills readers with lots of suspense, action and romance. Maysa’s situation brings lots of excitement and tension to the story as the Kaska Pack sets out on another rescue and discovers that they may have to get ready for a war and the hunter after Maysa causes quite a bit of mayhem to the story as well but don’t get me wrong, not all the excitement in the pack is due to danger and chaos (sorry no spoilers). Well written scenes brings the story to life with vivid details while the continuous events ensure that there is never a dull moment. Once again, my visit with the Kaska Pack was a thrilling ride that wouldn’t let me put the book down until I had read every last page and from the way things are going it only promises to be more so.

Love this series of books. Writer does a good job of story telling and making every attempt to have clean proof reading/editing. Great stories. couldn&#039;t put this book down easily.

Love this series of books. Writer does a good job of story telling and making every attempt to have clean proof reading/editing. Great stories. couldn&#039;t put this book down easily.

This is the 4th book in the series. I have enjoyed each one and am looking forward to the next. I think it would be helpful to read the whole series in order. I would recommend this book to anyone who likes paranormal romance. I will definitely re read the series!

This was one of those books that you hate to put down. Doctor Seamus Rossi is a busy vampire. He is researching to find the drug that was used on Havana and caring for the Kaska pack plus there is an intriguing scent in the air outside that he believes may be his beloved. Nix, who is recovering from his recent injuries, believes that the scent belongs to a nocturnal flyer and that she hasn&#039;t shown herself because she&#039;s scared. Maysa Sutter is a flying fox (a.k.a. adorable bat)flying for her life but feels a compulsion to stay near the barn/clinic. She is being tracked by a super nasty bounty hunter. Maysa is phlebotomist and lab technician. Her entire colony has been captured by an illegal drug company in Buffalo who are performing experiments on shifters. Aaric, the leader of the Buffalo based coven is horrified that such things are happening in his territory. It looks like there may be at least two crooked council members, an illegal pharmaceutical company and a couple of bad alphas who are into drugs for shifters. There is excitement. A lab raid. Rescues and a Birthing. Anew member to the pack transfers from Aaric&#039;s coven, not every vampire has a bunny beloved! There are some sorrowful scenes the kidnapped shifters suffered a lot Flowers for Enzo arrive twice!! The mysterious bouquet giver is still talking with flowers. A vampire is always protective and patient with their Beloved. HEA naturally.