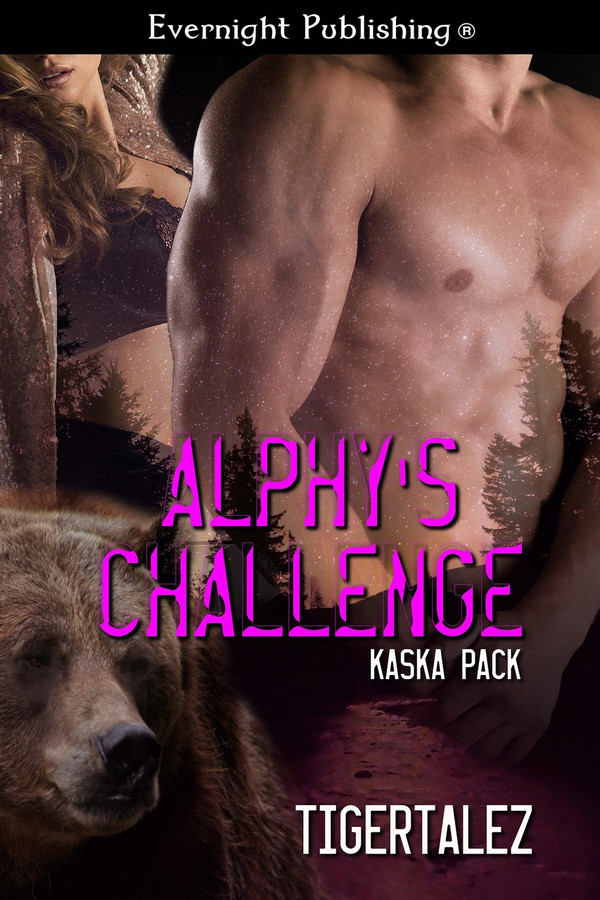 Fate has given Kodiak bear shifter Ralph “Alphy” Kaska a one-two punch. He is a Navy Seal on a mission when half his team is wiped out, and less than a week later, while still recovering from his injuries, he gets word his parents were killed and he is needed to take custody of his younger siblings. To add insult to injury, no alpha wants a shifter as powerful as Alphy in their territory, leaving him and his young siblings with no place to live.

Running out of options, Alphy makes arrangements to stay with their last known relative, a great-aunt whom he has never met. When he arrives in the Canadian woodlands, for the first time in his life his bear settles and he feels at home. His great-aunt, the last remaining member of a once thriving sleuth, offers for them to stay permanently and proclaims him alpha. Alphy accepts, but before he can put any future plans into motion, he comes across his mate and discovers a whole new challenge. So Alphy calls in his paranormal buddies, and together they try to build the new pack, and defend it.

“Miss, I’m not going to hurt you. Is everything ok?”

His voice strummed happy tingles in her belly, and goosebumps actually broke out on her arms. She looked at his face, trying to judge his sincerity. But with his voice and those eyes, she was a goner. She sat there frozen, struck stupid by all his glory. Then he smiled, and she discovered her butterflies had rocket launchers. Her breath caught in her throat, and sweat started to bead across her upper lip and forehead. Oh no, she was sweating. The hottest man on record and she was staring at him like some wide-eyed loon and sweating!

“Can I open the door?” he asked her. She loved hearing that voice. What else could she do to keep him talking?

I bet I could orgasm by just listening to his voice. She didn’t realize she was nodding until he stood up and flipped up the door latch to pop it open. Her mind went blank as she found herself staring right at his lower stomach and crotch. Holy huckleberries, that’s an impressive bulge.

Cooler air lightly suctioned past her as he opened the door. He squatted down again, placing his large hands on his bulky upper thighs. I didn’t know they came in those sizes. Yes, she had truly lost it. This had to be some sort of hallucination caused from her little breakdown.

“I’m Ralph, but everyone calls me Alphy.”

Oh boy, she thought, he sounds even better without the window hampering his voice. Bad window, bad. Her brain, seemingly out of nowhere, clicked back on just enough to respond. “Gale,” she breathed out. She felt the hit to the stomach from those rocket-launcher butterflies again when he gave her a wide, bright smile. His teeth were straight and white. How do people actually get to look this perfect?

“It’s nice to meet you. Now, can you tell me what’s gotten you so upset so I can fix it or kick its ass?”

She felt the loss when he leaned back on his heels but for only a brief moment until the abrasive skin from his palms lightly grazed her dampened cheeks as he cupped her face with his giant hands. His thumb skimmed over her cheek, and she automatically leaned into the pleasant feeling. She cleared her throat and snapped out of her happy place. “Uh,” her cheeks pinked, “my tire went flat.”

“I can fix that for you, but that can’t be the full reason why you were crying. I can see you’ve been upset.” He had gentled his voice to near whispering. It soothed her, and she began to calm. Gale took a moment to remember what it was she needed, other than to be licked like a lollipop by the muscular Adonis in front of her.

She held her breath for a few moments, then shook her head. “If you could change my tire, that would be great. I have a spare.”

He tilted his head and rested his arms on his legs. “Let’s take a look to see what has to be done then go from there.” He stood up and held his hands out for hers. She threw one leg out onto the ground and grabbed his hands, eagerly taking them, and tried to leap up but was promptly stopped and pulled back by her seatbelt.

Damn it! She covered her face in embarrassment. She peeked through her fingers at hearing a rich sexy laugh. The Adonis in front of her was laughing. He squatted down and reached a colossal arm around her and pushed the button on her seat belt, releasing her. Then he grabbed her hands and gently pulled her out of the car.

All she could do was to mutely stare up at him as he held her hands against his firm warm chest. His thumbs rubbed over her fingers causing more tingles. And someone really needs to de-arm those damn butterflies.

She managed to detach her tongue from the roof of her mouth. “Thank you.”

“You’re more than welcome.” His voice had lowered, rippling through to her core, provoking a shiver that galloped down her spine. Keeping hold of her left hand, he led her around the front of the car to the passenger side. His eyes roved over the tires as they drew around to the passenger rear flat tire. Letting go of her hand, he knelt down and inspected the tire, then stood up and walk back to the front passenger and made his way around, inspecting all four tires.

His face was tight in concentration as he walked back around to her. “I can put your spare on, but all your tires need to be replaced. They aren’t safe for you to drive on, and I’m surprised the others aren’t flat as well.”

Heat crept up Gale’s neck and spread into her cheeks. She looked down at the ground and fidgeted. She felt Alphy’s body-heat as he drew nearer and placed his hands on her shoulders rubbing her jaw-line with his thumbs. The act drew her sight back up, and she couldn’t stop herself from looking up into his face and falling into the soft brown depths of his eyes.

“Do you need help paying for them?”

The burn in her cheeks increased as she struggled with what to say. Of course she couldn’t pay, or she wouldn’t have gone this long without changing them.

Taking custody of his younger siblings, Kodiak bear shifter Alphy moves them to Canada and comes across his mate, discovering a whole new challenge, so he calls in his buddies in this captivating erotic paranormal romance. With a fast pace and smooth flowing plot, this romance captivates readers with suspense, excitement and romance. Alphy captures the heart of females with his very sexy alpha bear self as he takes custody of his two younger siblings and moves them to another country and takes on being Alpha of a new pack by taking in the ones others consider &quot;rejects.&quot; The reader can&#039;t help but get caught up in Alphy and Gale&#039;s romance as they learn to adjust to each other and to build their new pack. Their attraction to each other burns hot from the very beginning and only gets hotter with some hot and steamy sex scenes. Spine tingling excitement and anticipation builds as Gale&#039;s old Alpha continues to send enforcers after her and her family, thereby challenging Alphy. The well written scenes and details bring the story to life, drawing the reader into the story. The strong bewitching characters grab the reader&#039;s attention from the very beginning. The added drama and excitement of building a new pack with a hodgepodge group of supernaturals adds lots of depth to the story as well adding the sense of family and belonging of true friendship and loyalty. I was completely caught up in the story from the very beginning and I have to say I have completely fallen in love with the intriguing characters with their fascinating mix of personalities. I can&#039;t wait to read the next book in the series.

This paranormal romance adds an interesting twist to its world and makes it standout. There isn’t just one type of paranormal being in this story but several including shifters, vampires, and gargoyles. Yes, there is still the typical set up of an alpha but this story shares what happens when a alpha is born to a pack. It may not be what you think. The story starts off though with a very brutal scene with a clash between a paranormal herd, a human gay teen and a family trying to stay together. This scene almost had me wondering what I had gotten myself into and did I really want to continue reading. Keep reading. Soon, this story becomes one of tolerance, hunky shifters, and families. I loved some of the absolutely quirky characters and hope to see some of them in their own stories. The romance was quick, hot and fun. This isn’t a particularly long story but it includes everything that you would desire in a story. I love the uniqueness of this story and hope to see it continue in future ones. When Gale’s brother comes out as gay, the herd they live in with their mother, shifter stepfather and twin step siblings turns on him and orders him to leave the family and herd. Their stepfather decides to move the entire family but before they can leave, the herd enforcers attack Gale’s brother seriously hurting him. Now, on the run, the family is trying desperately to stay together had survive. Alphy’s military unit has just been killed and his parents end up dead not a week later leaving him 2 younger siblings to raise. While he knows and respects his pack’s alpha, he also knows that he is too alpha to be allowed to stay within the pack. With no other choice, Alphy gathers his siblings to move in with his great aunt. There he learns that she has held traditional pack land and has been waiting for someone to take it over. Alphy agrees but soon meets Gale, his mate. Has he found more trouble than he can handle?

Gale is being hunted by a pack that’s after her gay brother but a sexy guy comes along and she has no reservations. And then kisses the complete stranger! Come on! Grrr. The story really drew me in and I could see the hint of a great, five star story, hidden between the issues. I’m going to keep an eye out for this author because I think with time and practice they could be a really talented story teller.

Worth the read!! Everything from the characters to the storyline was so interesting and will keep you engrossed in the story!

A good book. Story plays out well. When you read this book, you can tell the author took time to make sure edits and proofreading was done.