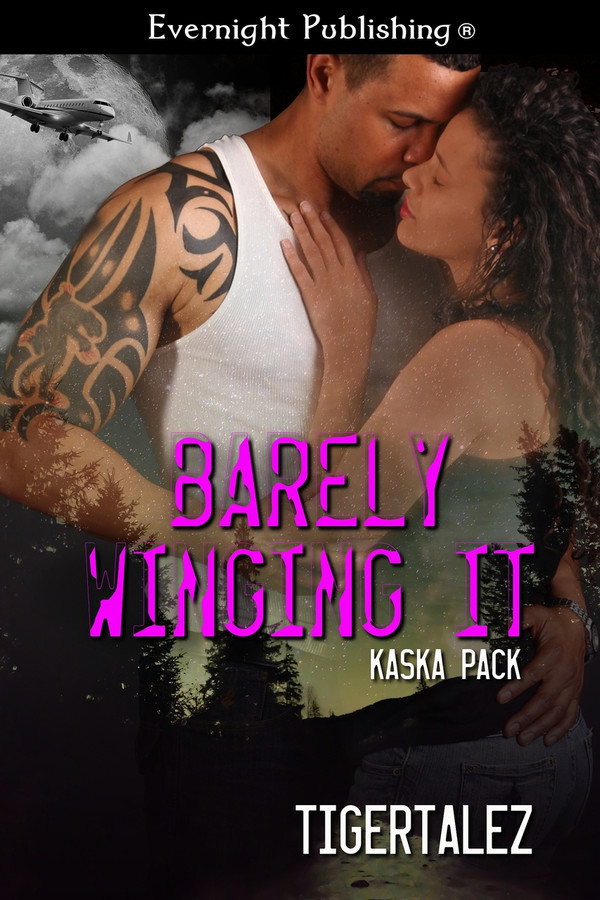 Two couples, Dultyn and Havana, Nix and Bronya, are brought together and tested by fate.

Dultyn has to learn how to overcome his past or he risks losing what matters most to him—but time is not on his side. The chaos around them doesn't give him time to even breathe, so how can he learn to share his darkness? Havana has to temper her character to grow into an adult, but it doesn't help when she's abducted, twice.

Nix battles to keep his mate safe, as well as his pack. His work is cut out for him as his mate is repeatedly attacked, then crashes a plane with his alpha inside. As for Bronya, she has to accept a reality that now includes paranormals and a gun-wielding pyromaniac stalker.

All four fight to defend the pack, and family, they are trying to build. As their pack doctor says, "Things happen fast in the paranormal world."

Dultyn landed with his weight thundering through the ground at his impact. He flung his arm out and around, and the water coating his arm splattered into the shifter as Dultyn backhanded him. Before the shifter could finish sliding across the muddy ground, Dultyn was standing over him. Pulling his fist back, he let it fly forward and pummeled the downed shifter into unconsciousness.

Whipping around, he quickly spotted the woman sitting on the ground. Water soaked into her ebony curls and ran down past her widened eyes, into and around her opened mouth. She was leaning back against her hands and her knees were bent, ready to crab walk backwards away from him. He had to hand it to her. She wasn’t running away screaming in panic. That was a common reaction.

“I am Dultyn. I am friends with Nix and Enzo. I will not hurt you.”

The shocked human slowly nodded, then placed herself in a slightly more comfortable position. He could scent she was exceptionally leery of him, but not quite afraid, like she didn’t know what to make of him.

The rain started to let up just a little bit, and he soon heard a falcon screeching through the air and paws beating the earth drawing near. Enzo’s wolf came into view and slowed down. His wet and muddy paws splashed against the soggy earth while he trotted towards Dultyn. His fur was smeared with blood. It ran off his coat and dripped onto the ground.

Dultyn motioned to the shifter. “This is Enzo. He won’t hurt you. Nix is here, too.” He looked up, and the woman followed his eyes to a falcon landing on a low branch.

He heard her draw in her breath. “The falcon I saw.”

Nix spread his wings and glided to the ground. Enzo trotted over and sniffed the unconscious attacker and stood guard over him. Nix shifted in front of the woman. Once he was fully formed, kneeling on the soggy ground, he held his hands up. “I’m not going to hurt you. I am so terribly sorry you had to find out about us like this. I wanted to wait for a better time when I felt you would be more ready for me to show you.” Nix inched forward, but Dultyn could see her eyes roam Nix’s naked flesh and after viewing what was in between his legs, her brows drew up. He couldn’t help chuckle. Just about all shifters were bigger … everywhere.

Her eyes darted to him, then Enzo’s wolf, then back to Nix, who stopped advancing after he was right in front of her with his hands held out to her. “Let me hold you, please. I promise we aren’t going to hurt you, especially me. You are very special to me.”

“You were the one in the field that day?” Her voice was tentative.

“Yes. I’ll explain everything to you, but right now I would really appreciate it if you would let me hold you. I promise not to do anything else. I just need to hold you to assure myself and my falcon that you are all right.”

After a moment of thought, she nodded. Nix’s relief was noticeable. Dultyn saw his chest heave in a relieved sigh, and his shoulders relaxed. The woman placed her hands in Nix’s, and he drew her to him. Both on their knees, he held her securely. Dultyn could see Nix’s eyes were closed as he slightly relaxed, and a fully relieved look passed over his features. Dultyn’s heart ached. He wanted that with his mate. They’d both made mistakes, but he wasn’t going to focus on who did what. He was determined just to fix them. It was well past midnight though, and with this new mess, he wasn’t sure if he could fix his mistake tonight, but if not, he vowed he would tomorrow. Even if he had to fly through hell and face the beast, he would.

A growl drew everyone’s attention to Enzo. The unconscious attacker was coming to. When the offender opened his eyes, Enzo placed a heavy paw on his chest and continued to growl in the man’s face. The man tilted his head and bared his neck in submission to the more dominant shifter.

Nix stood up, taking his mate with him, and led her to stand by Dultyn. “Bronya, this is Dultyn. Dultyn, this is my mate, Bronya. Would you watch her while I back up Enzo?”

Dultyn nodded. He watched Nix place a slight kiss on the woman’s cheek then turned to help the beta. Rain spattered off his naked shoulders creating cords of water that streamed down his body, pulling stray droplets down with them as they connected.

Dultyn spread out a wing and held it over the woman, hoping to keep her sheltered and slightly warmer.

Nix directed his anger at the man. “Get on your feet!”

Before the man sat up, Slate, in his lion form, leaped into the tiny clearing and slid in the mud to a stop. Dultyn heard Bronya gasp next to him. “Do not worry, that is Slate. He is part of our pack and won’t hurt you or Nix. The shifter on the ground, however, might get a little roughed up if he isn’t careful.”

Bronya didn’t respond, but she slightly relaxed. She remained silent as they watched the offending shifter slowly rise, keeping his neck exposed the entire time. Popping joints and ligaments added to the sound of the rain as Slate shifted.

Looking down at the wolf, Slate addressed the beta, “Matteo stayed in the room waiting for us.” The wolf nodded his head, then nipped at their prisoner’s heels to get him moving. “Why aren’t you shifting?” Slate asked.

“Because he knows how pissed off it would make me for someone else to be naked in front of my mate,” Nix bit out irritably. Dultyn saw his jaw twitch as he clinched his jaw and the look on his face mirrored what his own had when he had seen Havana undress and stand naked on the porch the night before.

Slate looked around and nodded his head towards Dultyn and Bronya. Then looking back, he raised a brow at the irritated falcon shifter. “I’m mated, thus I don’t want her, so get over it.”

Two couples find their mates and then they are tested by fate as they have to fight to defend pack and family in this exciting paranormal romance. Dultyn has to overcome his past and Havana has to grow up, Nix has to keep his mate as well as the pack safe and Bronya still has to accept a new reality and the reader can’t help but get drawn into all the excitement and romance as both couples struggle to reach their happily ever afters among all the adversity that seems to surround the Kaska Pack. The characters are strong captivating and each are charismatic in their own special way which adds quite a bit of diversity to the story as well as grabbing reader’s attention and the attraction between Nix and Bronya and between Dultyn and Havana is combustible for both couples but their matings couldn’t be more different. The story is fast paced and has a smooth flowing plot that covers lots of ground with lots of excitement which means that there is never a dull moment, especially since there is a stalker, the bad guys from the other packs are still causing trouble, abductions, plane crashes, and bullets, not to mention that there looks like the paranormals have some new enemies to worry about. The well written scenes bring the story to life and the well-orchestrated events keep readers from putting the book down once they start reading it. Once again, the Kaska Pack was a thrilling adventure that had me on the edge of my seat from the very beginning and I love how two couples found happiness among all the chaos.

Alpha Alphy&#039;s Kaska Pack of those who were forsaken by their own is back! Love this series. There are a lot of laughs as well as some sorrow and some torrid love scenes all wrapped up in a really good story. Phoenix Savage, falcon and pack tracker, finds his human mate Bronya Webber . Bronya is a pilot who loves the sky as much as Nix does but she has a crazy stalker whom she only had one date with but he wants more so burns down her apartment. Apparently he&#039;s thinks that is a good way to win her over. Meanwhile Alphy&#039;s little sister Havana (bear ) is turning 18 and will be old enough for her mate to claim. Dultyn is a gargoyle and Havana&#039;s mate, he&#039;s also fairly old and thinks that Havana is too young to be stuck with someone like him. Will Dultyn smarten up and rescue Havana from kidnappers? Will Nix and Bronya fly off into the sunset to their tree house? Who is sending flowers to Enzo? Will Bronya&#039;s human parents accept Nix, a shifter? Will newcomers Neto Locklear and his sister Isa, buffaloes, settle into the pack ? Hey, it&#039;s HEA, everything will work out .... eventually. ;)