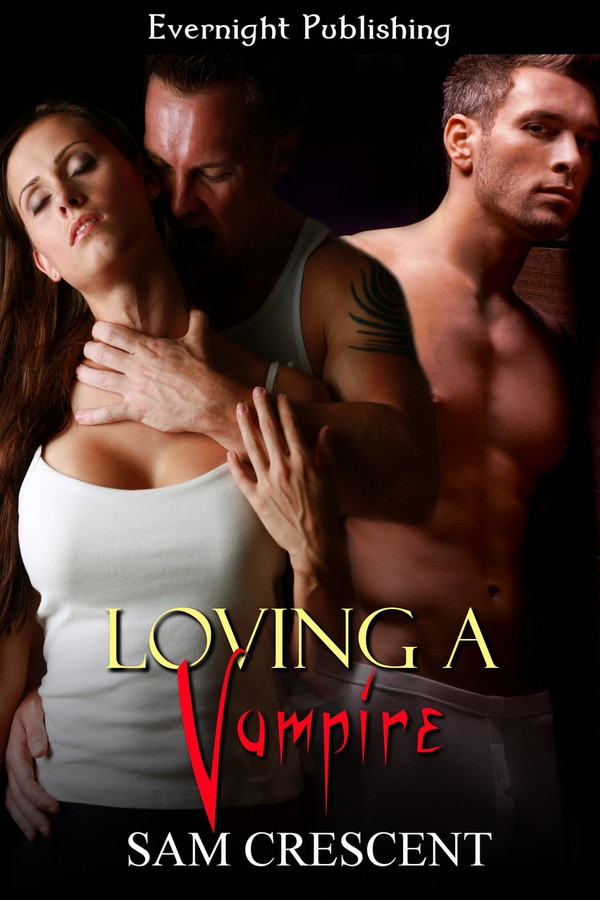 Finding love as a human is hard, but try being a vampire plagued with blood-lust—it’s impossible!

Augustus has been alone for a long time. Now all he wants is a woman to love and a friend to spend his time with. But after centuries of being alone and failing with the people he turns, Augustus loses hope.

When he stumbles on dying drug addict Gregory, Augustus cannot believe his luck. Their friendship builds over time as he keeps the human alive until Augustus would do anything for Gregory, including finding a woman for them to share.

No woman has ever become an obsession to him until he meets Marianna, whose beauty captures his attention … and Gregory’s.

Can these two humans satisfy one old vampire? And what happens when Augustus loses control and kills one of them? Will it be too late to change them, or will one of them turn their back on the blood-lust-filled immortal?

Loving a vampire is hard.

Staring into her eyes, he reached for the button of her jeans. He unbuttoned her jeans and pulled the zipper down. She didn’t fidget or tell him to stop. Her fingers stroked his face as he removed her jeans.

Next he took away her panties until she was before him naked from the waist down. During that time he didn’t break eye contact once.

Running his hands up her thighs, Augustus pulled her closer. He moved her so she straddled his lap. Tiny red hairs covered her pussy confirming she was a natural red.

Marianna cupped his face and slammed her lips down on top of his.

“Why would I want this to stop?” She spoke the words in between kisses.

He grabbed her ass and ground his cock against her naked pussy. She moaned and wrapped her arms around his neck.

“I’d going to touch your pussy.” Augustus didn’t wait for an answer. Easing her down beside him on the sofa he opened her legs and took in the sight of her glorious red flesh. Her cunt was glistening with her cream. Pressing his hand on her stomach, he moved down to her slit.

Opening her silken folds he stroked her wetness.

She gasped, cried out but didn’t pull away.

A vampire is stroking my pussy.

The only thoughts running through her head were directed at the man in front of her. Could she call him a man, or would vampire suit? She didn’t know which word to use or how best to approach their situation.

Hearing Gregory wanted her and so did Augustus made her feel powerful. Two men wanted her. She’d been going through her life always feeling fat and frumpy. Now, two men wanted her. Admittedly one of those men was a vampire, but she wasn’t going to count him as anything other than a man.

Augustus stared down at her as he stroked over her clit. “You’re so sweet and perfect.”

He chuckled. “You’ll not be a virgin for much longer.”

His words didn’t scare her. They excited her.

“Gregory is upstairs, and he’s wishing he was down here,” Augustus said.

Augustus paused. “Yes. Shall I call him down?”

Nibbling her lip, indecision struck her hard. Did she really want Gregory to see her like this? Thinking about sex and doing it were two different things. She’d been a virgin for a long time. Was she ready for this next step?

Excitement, fear, apprehension, nerves, Marianna felt all of it seconds after his questions.

“So much feeling for one so young. I’ll make your decision easier.” Augustus stroked her cheek. She relaxed against his hand. “Gregory!”

I love to read books by this author because you are never sure what you will get. They are each exciting and the passion always melts the pages. This is one of the shortest’s books that I have read by this author. Augustus is a vampire that has seen lots of things. He is 300 years old and I can’t say that I would survive after everything he has lived through. All he wants is a friend and a woman to love. For a vampire that can be hard to find. Seems that he suffers from blood lust and everyone he turns has the same problems. Until one day he hears someone screaming in his mind that he wants to live. He decides to help the human out and get his story. Seems that Gregory was a drug addict and was just after his next high. He never knew that this time would be the death of him. Gregory has been friends with Augustus for five years. Augustus gives him blood everyday because it is how he survives. All Gregory wants to be is a vampire. He just can’t seem to get his point across and gets mad every time the subject is brought up. Everything changes one night when Augustus notices a waitress in a cafe and stops to see what is holding his attention so much. Marianna is an innocent young woman and doesn’t know the dangers that are always around. Even her boss is a danger to her. She has noticed this same customer coming in every night and doesn’t know what to say to him. That night on the way home she is almost raped but gets a saving she never seen coming. She never knew that there really were vampires. I will warn you that this is a great read but it is also a menage between M/F/M. The males have no feelings for each other that way. They just all three fall in love with each other. At first I didn’t know about this book because the author wrote differently and it took me a little to get used to it. Now I am glad that I took the time and read it. I usually read the series that she writes. I will warn you that there is also lots of sex in this book. If none of these things bother you then you should really give this book a try. After I read this book I never wanted to be a vampire as much as I did when I finished this book. There is just something about a vampire that turns me on.

This was not what I was expecting in such a good way. Augustus saved Gregory and they were really good friends. Augustus saved Marianna more than once and Gregory helped. These three went through a lot of emotions and had to trust each other with every thing they were dealing with. This was a great story.

Augustus has lived a long and lonely existence for centuries with no end in sight. But when he literally stumbles upon Gregory, a drug addict who is dying, Augustus turns him to save his life thus binding their lives together. The men forge a friendship that builds over time. When Augustus and Gregory become enamored with the innocent beauty Marianna, neither men could have begun to imagine the turns their lives would take. Augustus, Gregory and Marianna are forced to make life altering decisions that could rip their world apart or find them a lasting lifetime of happiness and love. No matter what genre author Sam Crescent is writing in, fans of this widely popular writer can count on her to weave consistently excellent, intricate and stunning stories with an intensity and extraordinary edginess that entertains. Loving a Vampire is an engrossing story about friendship, trust and love between three very different characters and although the bond between them seems unlikely, the reader is literally blown away by the dark, emotional and utterly seductive romance and the dangerous journey to find their happily ever after. The author does an excellent job of developing her characters as well as the establishing the relationship between them for the reader to be able to feel like they are actually part of the story. The fierce turning of Marianna at the hands of Augustus when he can’t control his blood lust is portrayed is such a way that the reader feels his regrets, his heartache as well as the desire that Augustus feels for Marianna. It is always well acknowledged the bond of friendship and devotion between Gregory and Augustus. There is plenty of sexual tension and heat between Marianna, Augustus and Gregory with Marianna beginning the focal point of the relationship. The ending is purely explosive and emotionally satisfying.