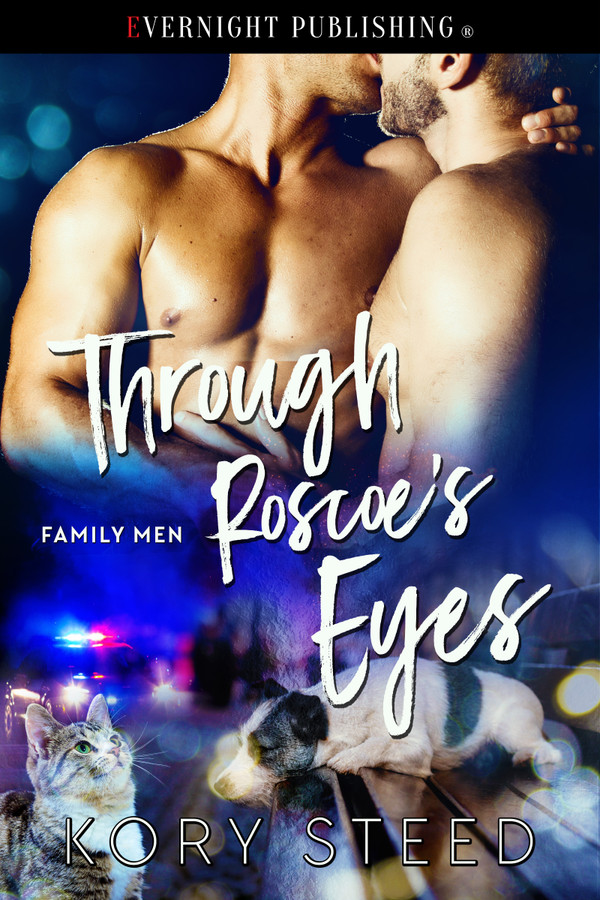 When Reggie sets out to continue his mother’s mission to feed the homeless, he never anticipated how much a chance encounter with an injured man, his small, gaunt dog, Roscoe, and sick, young cat, Cinders, would change the course of his life. With a winter storm approaching, Reggie makes a snap decision and brings the wary trio to his estate home to be cared for and nursed back to health.

Reggie learns the man’s name is Calvin, he was a quartermaster in the army, and he was dishonorably discharged prior to the repeal of “Don’t Ask, Don’t Tell”. Taking pity on the man and in need of someone to help him run his mother’s foundation, Reggie offers Calvin a job. With few prospects in sight to find shelter for his small family during the peak of winter, Calvin reluctantly accepts Reggie’s offer on a trial basis, but that it is only one of many trials both men will face.

Eventually, yearnings Reggie and Calvin had buried deep inside begin to fan the nearly extinguished embers of passion in both men. With Calvin drawing emotional support from Roscoe and Cinders, and Reggie discovering an ally in his beloved housekeeper, both men explore their newfound attraction, edging them toward the precipice of an ecstasy neither could have imagined.

Will the discovery of a past connection between the two men’s families be enough to bring them together? Or will sinister, outside forces and an unexpected loss of life shatter the bonds between both families and both men for good?

Reggie nodded and smiled as he closed the door behind them and then led Calvin to the foot of his bed. Placing both of his hands behind Calvin’s neck, he pulled him in and tenderly kissed his mouth. His hands slid down until he reached the top of Calvin’s shirt. He drew the shirttails from his pants and began to unbutton it.

“You’ll go slow, right?” Calvin asked as he pulled away, breaking the kiss.

“Whatever you want, Calvin. We don’t have to push this. We can just talk if you like.”

Calvin’s eyes began to twinkle. “Hell no,” he said, seductively. “The time fer talkin’s over. I want the full treatment.” Then his face turned impish. “If you please, sir.”

Reggie laughed out loud. “Well you certainly don’t have any difficulty making your wishes known.”

“Oh, hell yeah, but it’s been more ’n a couple o’ years. Things likely t’ have un-stretched if’n ya know what I means.”

“I do, and I hope you’ll not be the only one to be re-stretched tonight, if you know what I mean.”

“I’ll do my best.” Calvin reached for Reggie’s shirt, but Reggie stopped him when he cupped his chin with his right hand and drew him toward him by the shoulder with his left. Calvin’s arms fell to his sides as a moan escaped his mouth when Reggie ran his tongue up his neck and ended behind his ear.

“God, you smell good,” Reggie whispered. “You taste even better, but there’s something I’ve wanted to taste even more for days now.” Reggie dropped to his knees and frantically yanked at Calvin’s belt. He undid the top button, and slid down the fly of his pants, then pulled them to the floor in one fell swoop. Immediately his mouth was upon the thick, seven-inch, hard shaft, drawing it into his mouth through the boxers’ fabric.

As Calvin’s legs began to tremble, he grasped Reggie’s head, steadying himself. “You’re gonna make me buckle over if’n you keep that up.”

When he slipped the mushroomed head through the boxers’ fly and sucked down the liquid-gold pre-cum oozing from the tip, Calvin grunted. “Damn, boy, you know what to do with a mouth!”

Spurred on by Calvin’s words, Reggie began to bob his head up and down, sucking extra hard as his lips passed over the head’s flange. He drew the shaft in further until his face bounced off Calvin’s belly when it reached the back of his throat.

Calvin could feel himself being brought closer and closer to the edge of orgasm as his prostate began to shudder. “No, Reggie! Wait! Please slow down.” He began to pant. “I want the first … first time I come … come with you to be … to be with you inside me.”

“So good … you taste so good,” Reggie moaned between breaths, not slowing down in the least.

“Reggie!” Calvin cried out as he stumbled forward.

As he fell toward the floor, Reggie’s grip was broken as Calvin caught himself against the footboard of the bed. “Damn, boy, I nearly came. You got yourself one hell of an appetite there!”

“And then some,” Reggie said, with a leer.

Calvin sat down on the floor and held his hands out in front of him. “Please, can we slow this down a smidge? We got all night.”

“Yeah, we do,” Reggie answered with lust in his voice. “And I’m planning to dine on you several times before morning.”

“Even better. Then we’ll be all slick and slippery.”

“This here’s a different side of you I ain’t never seen, fer sure. I think I like it, Reggie, but it’s gonna take some gettin’ used t’.”

“Sorry,” Reggie said anxiously. “I’m just so worked up right now. I can’t believe this is really happening, not to me, not now, and I don’t want it to slip by.”

Calvin caressed Reggie’s face. “Me neither.”

“I was so sure I wasn’t going to let it happen. I was determined to not allow my desire for you to ruin the friendship that began to develop between us. And besides, you’re my employee.”

Calvin leaned forward and reached out to caress Reggie’s face. “I ain’t makin’ light of it, but I sure am glad you decided otherwise, ‘coz I’m gonna need help with this,” he said as he gazed into Reggie’s eyes and drew his hand to his pulsating shaft. Then he lowered his eyes to Reggie’s groin. “And I think you’re gonna need help, too.”

Calvin pushed Reggie back up and rose to his knees as he began to unfasten Reggie’s pants. As the belt came free, and Reggie helped to shimmy them and his briefs down, his eight inches of manhood sprang free. It was so thick, Calvin’s fingertips barely met when he wrapped his hand around it. So engorged with blood, its purpled veins contorted and seethed, begging for release, as the shaft swelled and bounced with each heartbeat.

Reggie moaned as Calvin caressed its length with his fingertips. “There’s only one thing that will relieve it, Calvin.”

“I know.” Calvin answered as he licked his lips and leaned forward. “And I’m gonna help you out with that right now, as best I can.”

The moment he pressed his lips to the swollen, purpled head, Calvin began to suck greedily, drawing in the briny nectar that oozed through the slit at the tip. He licked his thumb and index finger and formed them into a ring, then wrapped them around the sensitive spot behind the ridge, extending the pressure his lips exerted and gently milked back and forth across the sensitive glans. As saliva slid down the shaft, it lubricated his grip even more, sending shivers up Reggie’s spine.

Reggie began to slowly thrust his hips forward, advancing his cock until it pushed through Calvin’s stretched lips. He continued to thrust until it reached the back of Calvin’s mouth, nearly dislocating his jaw with its girth. Calvin gagged and his eyes watered, but he pressed on and swallowed as the head passed his tonsils, drawing the tip down his throat. Reggie shuddered as pleasure waves spread from his loins and out through his body when the thickened saliva that formed at the back of Calvin’s throat slicked the path his cock followed. “Baby, you’re bringing me close. You’re going to make me come.”

Calvin slid off his cock, choking as it left his throat. “Ain’t that the idea?” he said after wiping his mouth with the back of his hand.

Reggie Scottsdale is following his mother’s example and helping those that are extremely down on their luck and sleeping on the streets. He noticed a young man with a sign that stated, “I ask not for me, but for them.” On the sign there was a well-drawn picture of a dog’s head and a cat’s head. When he pulled over, he saw a young man with a child’s sleeping bag that was covering a terrier named Roscoe and a little kitten named Cinders. Reggie left, knowing that he had done all that he could do, yet on his way back home he heard his mother’s voice in the back of his head telling him to turn around and take Cretin to a hotel even though he already gave him money. Yet, when he did go back, he found Cretin laying on the ground with a large bleeding gash on his head, his stuff torn apart and gone, and poor Roscoe and Cinders curled up around him. Reggie knew that there was only one thing that he could do, he gathered all three of them into his car and brought them to a cottage that was on his estate. He made sure that there were vets and doctors were waiting for them. During the cleanup process they learned his true name was Calvin Chadwick. Calvin is a strong man with a heart of gold who only thought of his pets–or as he calls them that his ‘babies’. The author did a wonderful job of showing how far our army veterans can fall through the cracks as Calvin had been a quartermaster in the Gulf War. He had been able to hold down a few jobs, enough to keep an apartment. Reggie is a man that you can’t help but admire for his self-sacrifice and the ability and want to help those in need. What brought tears to my eyes is when Reggie finds Calvin’s family. As it turns out his sister Eloise and their mother were living above a bar where she worked along with his brother, Caleb. Reggie was worried about Calvin’s mother’s health as Eloise was vague about it. Poor Calvin was brought to tears and things became intimate when he blurted out how he felt for Reggie. It was sweet when they both opened their scarred hearts and allowed their love and lust overcome them. As it had been a long time for both, it was extra hot. Beware, you might want a fire extinguisher ready! Then a bit of levity when Roscoe and Cinders entered the room and joined them on the bed, and Cinders got to enjoy some caviar. Then a dose of cold water was thrown on the lovely scene. One of my other favorite moments was while Virginia was yelling at Calvin, Roscoe and Cinders came to his rescue. They ended up jumping on the table making a mess as they slid across the tablecloth and knocking everything over. Roscoe was barking and Cinders was hissing at her, this caused Peabody to pee all over her and making her run from the room. I absolutely loved this book as it shows how humans can see beyond themselves to help others. Love and devotion given is often repaid twice over. This is a wonderful plot that again shows how our veterans are slipping through the cracks and not getting the support they deserve. We learn that if someone’s given a second chance, they can turn their lives around. I also really enjoyed the connection between Roscoe and Cinders with Calvin, drawing strength from each other. The reader also gets to see how one heart can heal the other after both have been injured from those that they trusted.

Through Her Eyes by Amber Morgan