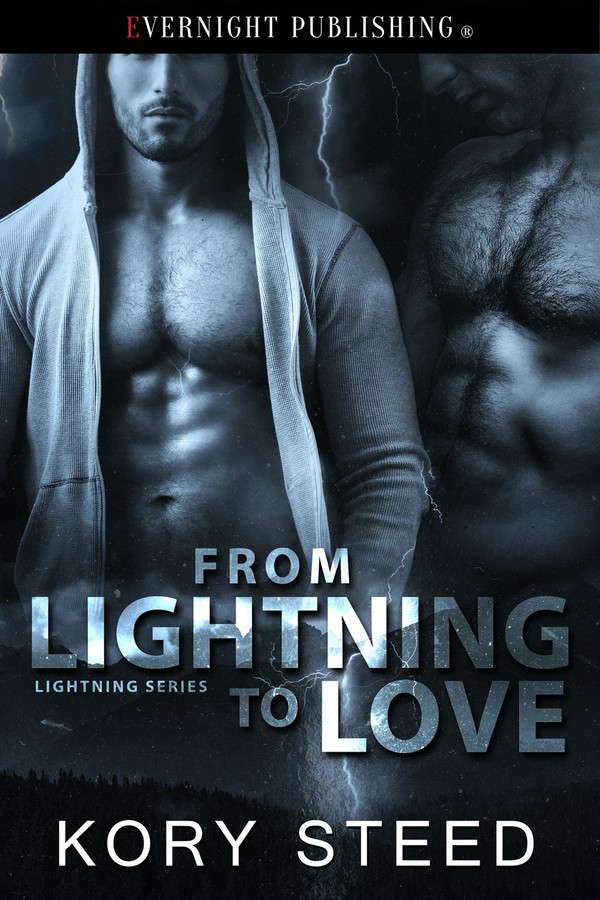 When thirty-seven year old army medic and Gulf War veteran, Jason, discovers an unconscious man hanging by a parachute from a tree on his secluded mountain property, little does he realize how his life will change. Isolated and alone, Jason uses his training to save the young man and soon learns he is Aaron, a twenty-three year old professional quarterback.

Having lived in near isolation for many years, Jason is ill-prepared for the physical attraction he develops for Aaron while tending his wounds. While Jason struggles with the emotions that begin to surface, Aaron’s strength returns, and his ravenous sexual appetite is revealed. In the weeks that follow, the two men become entwined in a passionate love affair that soon blossoms into a deep and caring bond.

Dare they hope for a future together? Will their new found love survive the separation of Aaron’s rescue?

When he looked over at Aaron, it was obvious that he’d been disturbed by the shout from the unsettled look on his face, but it hadn’t been enough to wake him. He also noticed that the sheet and blanket were off him again, and he had another raging erection. He was so focused on Aaron’s penis, he didn’t realize that Aaron had woken up. Instinctively, Jason began to reach for it, but withdrew his hand almost immediately.

“You can touch it,” Aaron whispered.

Jason nearly jumped off the bed.

“No really, Jason, you can touch it. Please, you have my permission,” he said more clearly.

“I watched you sleep last night, Jason. You’re a beautiful man. I’d be lucky to find someone like you.”

“Aaron, I’m sorry.” Jason sat up and swung his legs over the side of the bed, turning away.

Jason stood up and walked towards the window. He wanted to run away.

Jason turned to face him, unaware that his own erection was straining against his jeans. He focused his gaze above Aaron’s head. Aaron focused on the bulge in Jason’s jeans.

“Can I be honest with you, Jason?”

“Jason, I can’t believe I’m saying this, but here goes. We have to be realistic about this. You’re a man. I’m a man. You’re gay. I’m gay. And for God knows how long, we’re gonna be confined to this cabin. It could be months.”

“Everything you’ve said is the truth,” Jason answered quietly, lowering his eyes to meet Aaron’s gaze.

“Jason, I can’t pretend to know what’s going on in your head, so I can only speak for myself, and please believe me when I say this. I have needs, Jason, physical needs. I always have, and I now find that I’m very attracted to you. I don’t think it’s just because of what you’ve done for me or that I think I owe you something. Well, to be honest, that may be part of it, sort of like hero worship or something, but it’s only a small part, and besides, if I’d have met you on the street before I met Nathan, I would’ve jumped your bones in a minute.”

Aaron tensed his mouth and closed his eyes momentarily. Jason noticed the look on Aaron’s face at the mention of Nathan’s name. When Aaron opened his eyes again, he looked directly into Jason’s eyes.

“Jason, I don’t think you know just how darn handsome you are. You have a powerful masculine musk, and I’m drawn to it. The first time I got a hard-on when you were washing me, it was purely physical. I couldn’t help it, but over the past few days, I’m finding myself wanting you more and more. I can’t believe I’m saying this, but I want you to make love to me. I’m a very good lover, Jason, though obviously,” Aaron waved his arm over his broken body, “I can’t back that up right now.”

“Well, say something, Jason. What are you feeling?”

Jason forced the words out. “Aaron, it would be wrong.”

“How can that be when I’m throwing myself at you right now!”

This was so heart wrenching, how one bad experience can have such an impact in your life and your career. Jason encounter a terrible event early in his career that carry over some time later, when he meets Aaron and began a relationship... Thee research done on this book is so accurate and the author made the MC so real, I can imagine watching this as a movie on lifetime.

Loved it! I wished the ending would have a little more detail about how it end up - but I enjoyed it.

Boy was I pleased to read this. I loved the way the story unfolded and look forward to finding out...what next. Great first book from a new author.

I love how Jason is as much a rugged outdoorsman as he is a former Army medic. So when a hot, young quarterback falls into his arms (literally), what is he to do as he nurses him back to health? The teasing back and forth as they discover each other is so tantalizing! Jason&#039;s struggle to let himself open up is held in masterful tension with Aaron&#039;s innocence and vulnerability as he is restricted to bed and discovering his own limitations and needs. Add in a dose of the medical restraints and the skilled tending of a seasoned Army medic and instead of the same, old seduction scene, Jason can&#039;t help himself but tend to all of the young jock&#039;s needs. This really opens up to some super-steamy scenes that are described in sweat-throbbing detail. It&#039;s as sultry as it is romantic when a love so unthinkable turns into something so epic. I can&#039;t wait to read the next installment! Thanks.