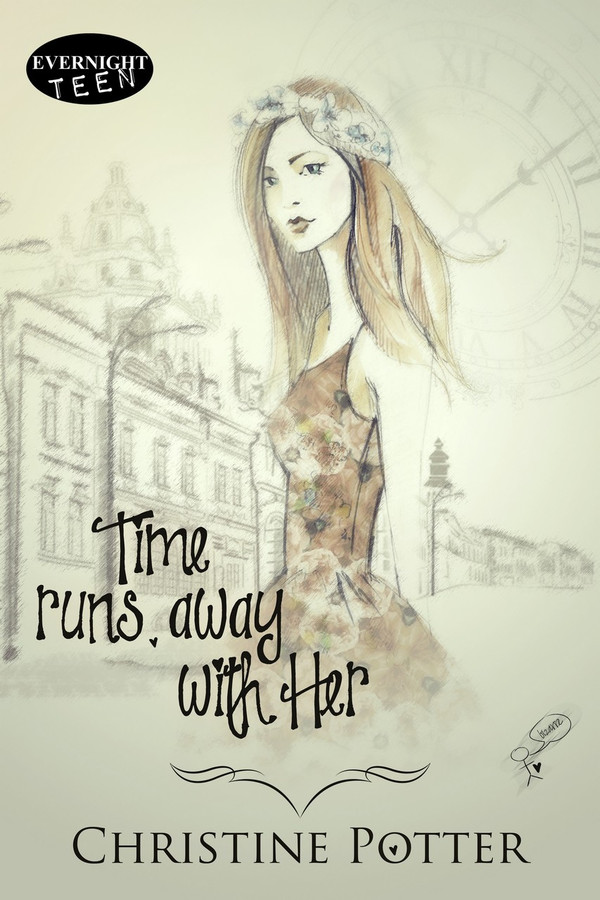 It’s not easy being Bean. Bean Donohue lives for her guitar, but her mom threw her out of the house during a snowstorm for singing. No way she’s going to get permission to go see The Grateful Dead at the Fillmore East.

Zak, her almost-boyfriend, will get drafted if he doesn’t get into art school, pot makes Bean paranoid, and her best friend can’t stop talking about sex. 1970’s not for wimps—but neither was 1885...or 1945. So why does Bean keep sliding backwards in time?

14+ due to adult situations

Although it was cooler than it had been upstairs, the night was still close, and the heat had made Bean slow and sleepy. I could wring out my hair like a dishrag, and it would dribble on the floor. The party swirled around her: ladies in rustling dresses of blue and yellow, gentlemen in evening jackets laughing together.

At the other end of the room was a cut crystal bowl, full of what looked like iced tea. Bean felt like she could dive into it. Standing in a circle around the punch bowl were a few more men in evening jackets.

How can you even think of wearing a jacket in this weather? She wandered over to the punch, which smelled wickedly alcoholic, like the bottle of rum Juuulia bought to make eggnog every Christmas. If she picked up one of the tiny glass cups next to the bowl and ladled punch into it, would it seem to those men in their stifling evening wear as if the glass were filling itself? That was kind of amusing, actually, but probably not a great idea. Besides, the stuff smelled like it would make you more thirsty, not less.

Maple leaves outside rustled again in the breeze, and the breeze offered no relief. She thought about Zak, and wondered if she’d be too miserable and sweaty to hug him right then, if he were with her. Which, of course, he was not. She thought about her room at home, her all-year Christmas lights, her guitar. She closed her eyes and tried to will herself back.

Outside, in the garden, Edwina laughed again. What a wonderful laugh she had! It sounded like it came straight from her belly, like she wasn’t afraid of being un-ladylike. Was she the one who had been crying on Bean’s last trip to this time and place? It certainly seemed like the same evening: the party, the Japanese lanterns, the night’s humid breeze...

Chris Potter has spun an engaging tale from inside the head of a very believable young adult with the woes and elations of any kid her age, anywhere, but with one curious, sometimes breath-taking quirk of time traveling ability. Bean is smart, brave and compelling as the main character; and the author paints precisely selected time periods with excellent, convincing effect, making this story absorbing equally for mature readers as well the intended young adult audience. This is a captivating good read.

Time Runs Away with Her is the story of Bean, a typical 1970s high school girl who fights with her mother, plays music, has a crush on a cool boy, and – travels in time. It&#039;s a novel for young adults, but there&#039;s plenty of 1970s nostalgia for us not-so-young adults. The fantasy elements are interwoven into the realism of the story in a most engaging and believable way, making the novel an enjoyable read for young adults of all ages.

There is something incredibly fresh and lovely about this book. At first glance, Rebecca “Bean” Donohue may seem like the typical girl-next-door, but she is anything but boring or drab. Quite the opposite—Bean’s inquisitive and smart and dynamic. Not to mention the fact that she slips backwards in time. Author Christine Potter does a wonderful job narrating the time travel in an easy to understand manner. And the time travel brings the reader to some very interesting places…stories within a story. The secondary cast of characters are simply too wonderful! Her energetic friends Suzanne and Sam, her mother Juuulia, and of course, Zak, her “almost-boyfriend. Zak is one of the best characters I’ve come across in a long time. This book would be great for anyone looking for a sweet romance, tales of friendship, time travel or even those who love the grooviness of 1970!

I was totally charmed by this novel, particularly the super adorable relationship between Bean and her boyfriend, Zak. Her manner of veering between brave determination and shy adoration toward Zak felt very realistic. His way of speaking was hilarious and endearing. I loved his constant sketching of everything and everyone and drawing Bean in a flurry of flowers and feathers and wings. He used a Rapidiograph, an art pen that was all the rage in the 70s. Even the hippie clothing was spot on. For teens curious about this now historic era, I vouch for the authenticity of Bean’s world. Oh, and there’s music! Bean has a girl group, and there’s the Grateful Dead at the Fillmore, Fairport Convention and the rest of the carnival bright soundtrack of the time. There’s time travel, too. I wasn’t sure what I was getting into with this element, or how smoothly Potter would be able to zing Bean back and forth without it being clunky. But she pulled it off. I never felt her pulling the author strings. Rather it felt like an organic part of the story and each scene back in time was a puzzle piece that was nicely completed by novel’s end. I related to so many things: Bean’s frosty, troubled mom and how the two of them had to make it work since the divorce. The overlarge drafty house that was lonely when Bean’s mom was at work. Bean’s friends: lovely Susanne in a too – fast, too-open relationship with her boyfriend Blair, and Sam, Bean’s flaky but feisty friend who seems to have it all, attending Deerwood Academy, an upper crusty local boarding school. Bean’s mom, Julia attended Deerwood but Bean’s family couldn’t afford to send her. Understandably, Bean is in turns fascinated and critical of the school when she goes there to visit Sam. And finally, there is Bean’s disgust and fear regarding unwanted attention from a guy whose creepy eyes and attention stay on her way too long. Highly recommended for teens who are curious about the infamous 1970s, and for those who love music, time travel and the high-spirited journey of a very endearing couple.

“Love is the heaviest energy of all.” To those of you who were alive in 1970, welcome back. To those of you who weren’t, just welcome. You’re going to love it here. Pour yourself a cup of hot cocoa. It’s cold outside. Snow is falling. It’s time to line the needle up to your favorite track on the latest Grateful Dead album and melt away the present day. Meet Rebecca—that’s “Bean” to her friends and peers. She’s sixteen years old, living the difficult life with her single mom “Juuulia,” learning to sing and play guitar without lessons, yearning for a little encouragement and love. There is a chance for love, she supposes, in the odd, long-haired art student named Zak. Her best friend and partner in high school harmonies, meanwhile, is Suzanne, who happens to have the coolest mom ever. A mom who would never kick her out of her house in the middle of the night at the beginning of a snow storm. Suzanne has a boyfriend, too: Blair, the local track star with the regular pocket joint and the unnerving, ever-shifting eyes. Bean yearns, too, to attend the exclusive, too-expensive Deerwood academy where her mother had once been a straight-A student—back when her mother had been rich, before the family had ostracized her, before Juuulia’d entered into a marriage seemingly predestined for divorce … and had Bean. But, boy, our girl can play guitar. She really can. With the help of Suzanne and her new friend Samantha, she might even get her singing where it needs to be, too. She feels a guilty pleasure that Zak considers her a “troublemaker,” as well, but she knows better. There’s just this … one thing. Bean’s a time traveler, you see. Not that she can control it—and that’s a problem. And things in the little town of Stormkill are about to get very interesting. In TIME RUNS AWAY WITH HER, Christine Potter serves up a book for young adults, teens, and grownups alike. Fans of realistic and dramatic fiction will find themselves well-served by the poignant and awkward day-to-day struggles Bean faces, as well as by the spot-on historical references, the perfect blend of nostalgia and edginess. Fans of the paranormal will be swept up in the mysteries of Bean’s oddity, the ghosts of a town’s past shrouded by dark rumors. And then, of course, there’s the romance. It’s both real and sweet, textured by the difficulties of growing up, complicated by the unpredictable intrusions of Bean’s uncontrolled gift—and threatened by … But, no. That would be telling. At the outset of this story, one really does want to get comfortable on the couch with a hot beverage, but be warned—there’s something unsafe here, as the story wheels towards several resolutions at once. Not all of them are easy. But, in the end, they are very, very satisfying. TIME RUNS AWAY WITH HER is a deceptively simple story. But by the time it’s over, the reader realizes with a goofy smile just how deftly Potter juggled all of the subtle elements that ultimately converge with a climactic and dramatic crash, rendering an artful tale at once uplifting, heartbreaking, fascinating, and unique.

Who Saw the Deep by Christine Klocek-Lim