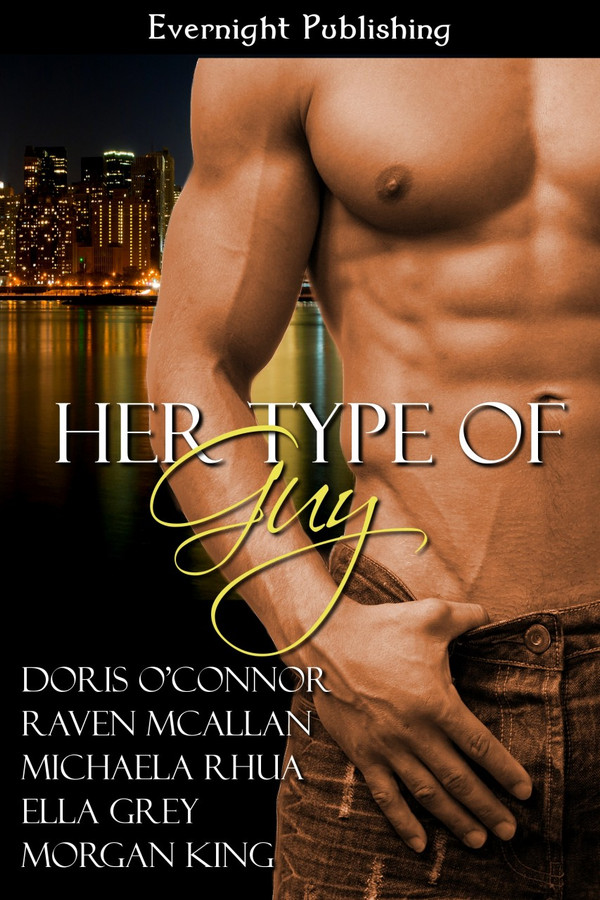 For every desire, there's a man to meet it. Someone's annoyance is another's kink. In this naughty collection of short stories, indulge your fantasies, and follow our heroines as they find just the right type of guy or guys…

From bouncing cocks to virgins, slow coaches, true Scotsmen, and messy play partners, sex toy experts and their mischievous friends—these guys are in need of their ladies. Why is one guy too grumpy to believe, another always too early? And can there ever be a future with a hired killer?

Only one way to find out. You might just meet your ideal guy.

The Man with the Bouncing Cock & Grumpy Pants by Doris O'Connor

A True Scotsman & No Longer Pure As... by Raven McAllan

Only When Allowed & Snail's Pace by Michaela Rhua

Matt reached into his jacket pocket and took out a small disc that fit into the palm of his hand. It was a vibrant pink and he chose not to keep it hidden. There was a little bit of the exhibitionist in him, it seemed.  The waiter bringing his coffee and her dessert would probably see it—the thought didn’t bother him.

Yep there he was, glancing from Matt’s hand to Josie’s face, back to Matt’s hand and across to Josie’s body where her nipples were now visible. Matt would have to be careful not to get caught staring.

“Enjoy your dessert,” the waiter said, too obviously deadpan as he left their table.

“I’m glad you like to be watched.” Matt said taking a sip of his coffee, using his free hand to lift the cup. It was a good guess given the signs of arousal her body was showing.

Could he make her cry out in pleasure in public?

She wasn’t meeting his eyes now but was blushing fiercely, her cheeks nearly the same colour as the control he toyed with, rolling it between his fingers. Her breath was coming in short, sweet pants and he hadn’t even set any vibrations going. Either she was incredibly responsive or the situation was one that really turned her on. He hoped it was both.

“Is the waiter looking at us?” Josie whispered.

“Yes, whenever he can. He looks as if he’s rather distracted from his job. He nearly poured red wine all over a table. Nobody else has seen, though.”

Matt took another sip of his coffee, careful not to spill the hot liquid; his own hand was now a little shaky. He placed the cup back in its saucer before giving in to temptation and pressing the button.

THE MAN WITH THE BOUNCING COCK – DORIS O’CONNOR Most men would probably love it, but to Dean having a cock that bounces and is always hard is a pain. He can have anyone he wants, except his next door neighbor. And of course the first time they meet she sees him in all his glory. Amelie may have been surprised when she first met her neighbor but she can’t stop wanting and fantasizing about him. One day a surprise will change both of them. Only Doris could write a cute story about a bouncing cock. A TRUE SCOTSMAN – RAVEN McALLAN Climbing the face of a rock in a kilt, with no underwear, in the freezing cold, is not fun. Charlie isn’t sure he is going to be able to do it. But a mysterious voice on the other end of his ear piece is encouraging and sexy and the reason he needs to get to the top. And when he reaches the top his prize awaits… Leave it to Raven to keep you guessing at the end of the story.

Some of these stories were really funny and really hot! I really enjoyed all of the different stories!