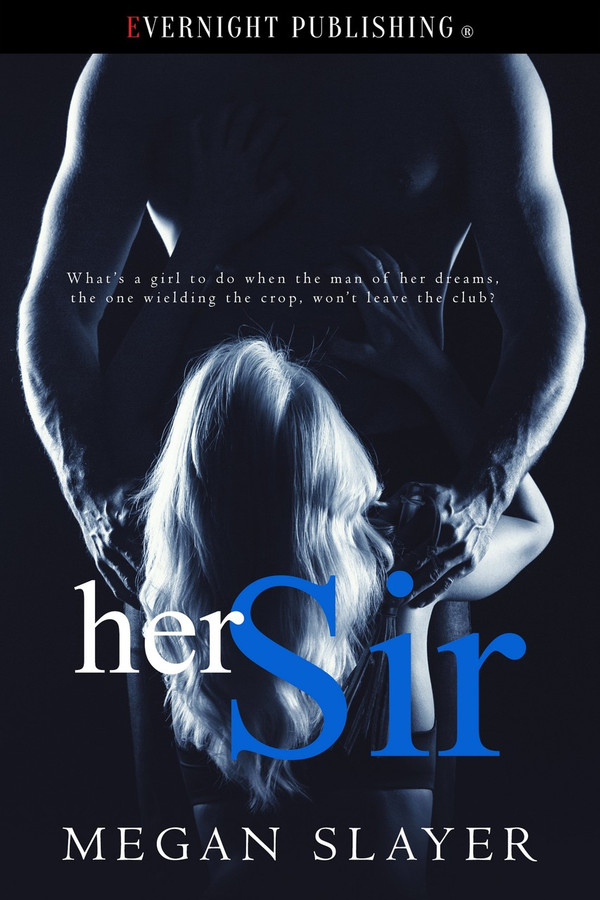 There’s only one man for Andi—her Sir.

Andi McCarron knew the moment she met Sir’s gaze, he’d change her life forever. Despite other Doms wanting her as their sub, she only submits to him because he knows how to make her skin tingle. The pain delivered from his crop makes her spirit sing. She needs Sir but she wants more—except he’s not interested in taking the relationship outside of the club. What’s a girl to do when the man of her dreams, the one wielding the crop, won’t leave the club?

Dean Meyer craves his sweet sub, Andi. She fills his dreams and fantasies, but she wants a relationship. He’s not sure she can handle both his demons and secrets. Still, he can’t deny the attraction to her. When fate throws them together, he has to make a choice—give his sub what she needs or let her go for good.

“You control everything,” she blurted. Her cheeks reddened, and she bowed her head. “Sorry. But you do.”

“Actually, you do. When we play, you’re the one in control. You say stop or slow, and I follow. I push you, but you tell me when you’re done. I’ll encourage you to stretch your boundaries, but only because I want to make you fly.” He pushed the cooling coffee to the side. “If you say no, then I respect your decision.”

“You expect me to kneel.” She flattened her palms on the table. “Like that last time.”

“I wanted to show off my beautiful woman. If you’d have said no before we left the private area, I would’ve stayed out of the main room.” He leveled his gaze at her. “I expect a partner. You were my best partner.” He hadn’t taught her very well if she thought she was second rate. When they played again—and they would be—he’d show her what he meant.

“You have one. A partner. I saw the demonstration,” she said. “You replaced me.”

“Slow down.” He hadn’t known she was at the club when he’d done the demonstration or he would’ve plucked her from the audience. “Which demo?”

“There’s more than one?”

“I don’t have a permanent sub, so I’m expected to do demonstrations for visitors, for the videos … for people who want to play the voyeur. That’s part of my job at the club.” Not his favorite part and he couldn’t wait to pass the torch to someone else, but he’d tell her that later. She managed to aggravate him like no other. He wanted to stretch her ass across his lap and spank the sass out of her. Then he wanted to kiss her until she collapsed. He wasn’t one to settle down, but she made him think twice. In her own way, she’d broken him.

“I thought we had something.” She turned her cup around. “Now I understand I was just another client.”

“I never said that. Never thought it,” he said. She’d been special from the start. He loved the way she felt in his arms, the way she moaned during a scene, the flicker in her eyes just before she came…

“Then why replace me? Why not tell me how you felt?” she asked. “Or have you come to this realization now that we’re not at the club?”

“First, I didn’t replace you. I don’t have any one sub I play with. The girls in the video are one and done. No sex, just demonstration and go. I haven’t found anyone who can fill your place. I’ve had a couple offers, but they aren’t you.” They shouldn’t be having this conversation in public, but she needed reassurance. “Would you like to have dinner with me tonight?”

Andi is searching for stability. She thinks she has found it with her Dom, but he will not take their relationship into the real world. When an ultimatum backfires, can Andi find who she is and what she needs without her Dom? I enjoyed Andi and Dean in Her Sir by Megan Slayer. This story is first in Ms. Slayer’s The Underground series. Andi thinks stability will fulfill her even if it comes in the form of a vanilla lifestyle. Can she accept that needing love will trump stability every time? Can she accept the second chance she is given? I love that Ms. Slayer gave Andi a man with his own issues. Dean needed to trust, not only himself but also Andi. His fear of commitment cost him more than he expected or did it? I love that Ms. Slayer gave us a story that wasn’t quite so clear cut. Both Dean and Andi had to get out of their own way. I am glad that Ms. Slayer gave them friends who were reading will and able to give them a swift kick when needed. This was a quick read. It was full of angst and love. I enjoyed meeting Andi and Dean as they worked toward their happily ever after.