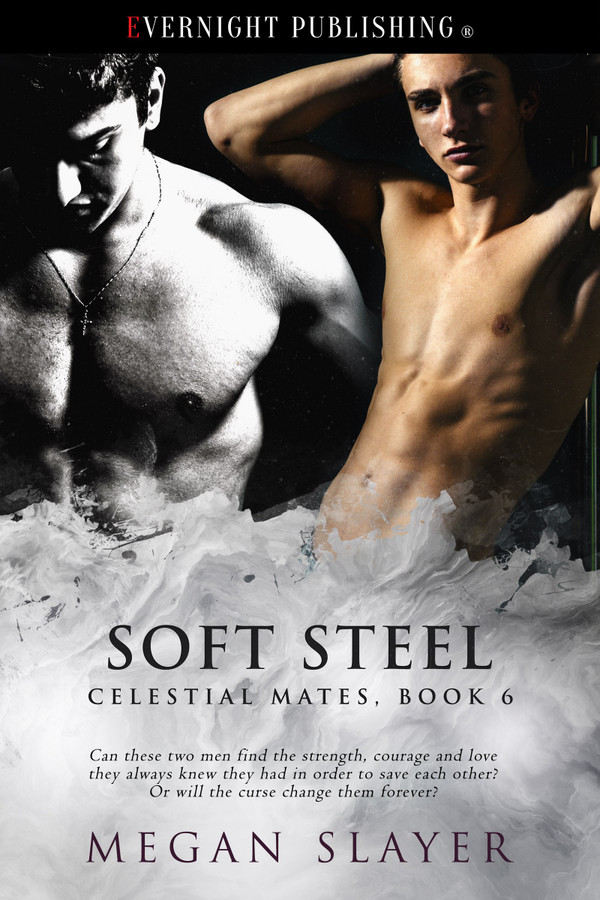 Valermo Dax wants to be loved. He doesn’t fit into societal molds and he’s fine with that. If he can find a guy who adores him as-is, even better. Stripping isn’t getting him noticed by the kind of guys he wants to date—until Corey walks into the club.

Corey Blumenthal knows who he wants to see at the club—Val. Ever since they shared a biology class four years ago, he’s crushed on the sexy man sporting glitter and those sky-high heels. He finally winds up the courage to take Val home, but things don’t go as planned. A curse, shouted in anger, turns their world upside down.

Can these two men find the strength, courage, and love they always knew they had in order to save each other? Or will the curse change them forever?

He leaned across the console and kissed Corey. “Thank you.”

“Don’t thank me yet.” He engaged the engine. “I might be shit in the sack.”

“I doubt it.” He laced his fingers with Corey’s and relaxed. “Even if you are, I’ll teach you.”

Corey sped out of the lot. “I could use a good teacher.” He chuckled. “I saw you back in biology and wanted you, but when I gathered the courage to visit the club and saw you again … I knew I had to grow some balls. I had to have you.”

“I want to be owned.” He shifted on the seat. “Even if it’s by a teaching assistant.”

“Don’t make me sound so great.” Corey snorted. “Teaching art is my passion.”

“Art?” He could see it. Corey would be sexy as hell in nothing but an apron and standing in front of a canvas painting. “Any particular period or media?”

“Ancient Greek art is my favorite period and drawing is my medium.” He stopped at the Middlesex Hotel, then turned into the lot and parked. “Val, I think I know what Mitt meant.”

“Huh?” He’d tried to forget his former boss. “Ignore him.”

“I can’t,” Corey said. “The thing about Zeus. It wasn’t idle chitchat or bullshit. He uttered a mangled version of a real curse.”

“Curse? Mitt? Then only curses that man knows are four-letter words.” No way Mitt had the intelligence or balls to use a true curse.

“I know this stuff. It’s on pottery.” Corey’s brow furrowed. “I’m serious. He cursed you.”

He fought the urge to roll his eyes, but he’d play along. “Okay, how did he curse me? I’m going to lose my money? I’m not exactly rolling in the cash. I’ll be ugly? Many guys don’t want a man who wears women’s clothing and underwear. I’ll be lonely? He wouldn’t sink that low.”

“No, It’s not about those things—not exactly.”

Val got his education on the streets and just wants to be loved. Corey is a Teaching Assistant who wants Val and has since school. Surely nothing can go wrong, right? Wrong! In this fast-paced novella, Val is cursed but it is Corey who ends up in the biggest predicament. This is the sixth book in the Celestial Mates series and I do wish I had read the others prior to reading this one. I think it would have given me more information about just what is going on. Now, to be fair, this story is understandable and I felt for Val and Corey. It’s just, for me, I would have liked more information about the characters who appear in this and who actually play a rather big role. Saying that though, this was a very good coffee-break book because it’s a quick and easy read. If you’re looking for a short read for a lunch break, then I recommend Soft Steel. originally posted at long and short reviews